He calls it The Great Wall of Vagina (because "vulva" doesn't rhyme with "China"). He casts women's vulvas and displays them in a massive wall of identically sized tiles.

As soon as I heard about it, I wanted to be a part of it. I shot the UK artist Jamie McCartney an email asking if we might be able to collaborate.

Although McCartney does come to the U.S. now and again and I travel to Europe on occasion, we never seemed to be in the same place at the same time. Until last week.

As luck would have it, we both were going to be in Florida, so the date was set, the plan was laid, and my feet started to get a little cold.

What on Earth was I thinking?

Why in the world would I drop trou for a stranger and let him apply casting material to my vulva -- literally the same glop that the dentist uses, but without the minty stuff? (Apparently the minty version was a bit too tingly for the models.)

Why would I want a permanent sculpture of said parts for all the world to see?

But as soon as I met McCartney on that gorgeous, sunny, Sarasota day, there was something about his demeanor that completely put me at ease. So when he was all set up and said, "Whenever you're ready," I slipped out of my yoga pants and hopped up on the massage table lined with plastic like it was the most reasonable thing in the world.

He asked me to scoot down and butterfly my legs. We joked about how silly this all seemed. My girlfriend looked on as he put the casting material between my legs. I flinched at the cold. "I warned you," McCartney teased. Once I was covered, he applied bandage material, and then we chatted as we waited for it to dry. 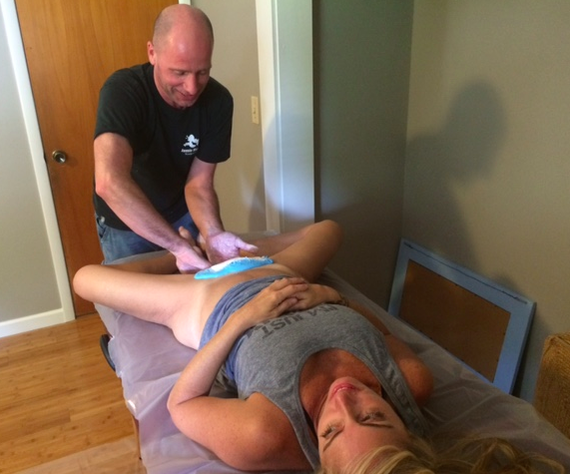 It seemed like the weirdest and the most natural thing in the world to do all at the same time. When it was set, he peeled it off, which has to be the most bizarre feeling on the planet. It was set but still gelatinous-feeling as it pulled away from my parts.

"There you are," he said. "Inside out, of course. I'm just going to put your vagina next to your head."

"First time for everything," I replied. McCartney had said he would make a second sculpture for my girlfriend to have. So he set to molding me once again, and it was just as cold when it went on, and just as weird-feeling when it came off.

I pulled my yoga pants back on when he'd finished, and he filled the molds with plaster, and in less then 30 minutes there were two plaster replicas of my vulva, each a little different because, as McCartney explains, it makes a cast of the vulva responding to the material it has on it.

He then used dental tools to pull out the blue bits left behind. "I have a friend who is a dentist who gives me his old tools. This is a little bit of voodoo," he joked. "Do you feel a bit of tingling down there?"

Honestly, the pieces look really cool. Kind of beautiful. Yes, a bit like flowers. A lot like O'Keeffe paintings. And, even though this word gets overused and can thus be a bit cheesy, it was really empowering. Being visible is the most vital thing we can do whether we're talking about bodies or sexuality or disability or any social issue, for that matter.

Saying "I am here, this is me, and I'm OK just as I am" allows other people to do the same.

I felt charged and a little buzzed when he'd finished. It wasn't sexual in any way. I was worried I might be turned on by being looked at or touched, but it wasn't that way at all. It was more of an "I am woman; hear me roar" kind of moment.

I am a woman. I have a vulva. There's not a thing in the world wrong with either, and I am not going to apologize or be ashamed. And I will walk the walk for other women who can't yet, until they can.

So that's why I dropped my drawers and spread my legs for a stranger -- for a man, no less. Because I love my body, and I wish the same for all women. Vulvas are wonderful, powerful parts. And they come in all sorts of shapes and sizes and designs.

Women don't get to see enough of them to know that, to know that they're normal. So doing this project is my tiny contribution to that normalizing. I'm OK, and you're OK too. Trust me.

McCartney actually began the wall in 2006 for that very reason. He wants women -- and men -- to love their bodies, including their naughty bits, and he loves to do it with equal parts art and humor.

It started with just making the casts of women's vulvas. But then the idea to tour them came to him, and the Great Wall of Vagina was born. Approximately $150,000 in time and materials later, the Wall hit the road in 2011.

"I was commissioned by a sex museum in London to make a wall of genital casts. They were going to go with photographs but heard I was doing body casting. It was the first time I could compare my own dick to 17 to 18 other men. I realized I was completely normal. A weight limited off. I had this epiphany from being cast, and I thought women could have that too. So I started this project, and I really had no idea where it would go."

Four hundred women volunteered to be cast. It was incredibly important to McCartney that it be volunteer-only, so that the women were contributing to the art, not being paid for their body parts.

Some women did it for fun. Some for art. Some to get over sexual trauma. Others to overcome body issues. One woman who hadn't had sex in years did it because she thought her pussy was a train wreck. But once she had it done, she called Jamie and said, "I have a sex life again."

"For a lot of the younger women, it was quite a significant event in their lives," McCartney explains, "especially with labiaplasty the largest growing surgery in the UK."

These days, McCartney is also working on collages of scans done with a regular old office scanner, including one of the American flag made from scans of women's bra-clad breasts. So he took scans of my breasts, both in and out of a bra; of my nether regions, both with and without panties; and of my backside. That process was kind of hilarious. But it too felt empowering.

There's not a thing wrong with my body, and getting a little validation on that front by seeing it as art isn't too bad for the 'ol self-esteem.

I pressed my breasts down on the scanner, and then McCartney laid it atop my bottom half, front and back. My girlfriend was in and out of the room at that point and kept walking in and shaking her head with a shit-eating grin on her face.

Nothing better than dating someone who is proud of everything you do. And I mean everything, including the fact that my cast will be a part of a new piece that will have one cast of a woman's vulva from every state. How's this for irony? I'm Miss Texas!

To see photos of the process and the final project, as well as videos, please click here.