Jessica and Michael (not their real names) were in the park being photographed for a portrait. Posed facing each other, standing toe to toe, him holding her by her hands, they were leaning backwards away from each other as far as they could, not moving as they waited on their photographer to take the picture.

"Guys! Guys!" shouted the photographer, walking briskly up to them. "You're too stiff! You have to loosen up!" He demonstrated his idea of "loosening up" for them by flailing his arms about as he spoke. And then he promptly retreated, marching back to his spot to resume taking their photos. "Look like you're in love with each other!" he called out.

But they were in love. What else could they do? The couple looked at each other and shrugged. The photographer snapped the photo anyway.

This is the typical scenario played out weekly by many photographers everywhere. Maybe you've even experienced this yourself if you've ever been photographed.

Then you'd be more than familiar with the routine being a whole bunch of "look here, smile big!" barking of instructions to mold couples into what looks to me like pretty awkward poses. I've seen couples made to pose standing several feet away (and behind) each other, having them each looking off into opposite directions, as if the other person wasn't there. I've seen her made to stand on top of a bench, him walking on the ground beside her, holding hands. Her being urged to kick up her rear leg nice n' high while embracing her guy. And frankly I have to wonder, "what the hell kind of story are they trying to tell though that photo?"

Well, that's the thing isn't it? Maybe it's not about telling any kind of story. Maybe all it is is exactly what we see, which is, the photo's only about doing some photographer's idea of a pose to photograph that pose, no matter what the people in it are about.

For some people that makes a photo and they're good. Though I have this philosophy I share with my portrait clients, which is you're going to look like whatever it is you're thinking about and feeling. So if what you're thinking about is what the photographer's instructing you to do, then your thoughts are going to be, "am I standing in the right angle? What do I do with my left hand? Do I look okay? Am I doing this right?" and you'll probably feel a little unsure, a wee bit uncomfortable -- and so that's pretty much what you're going to look like you're thinking and feeling.

Which accounts for why all this staging and posing typically has other people complaining about their photos -- that they look stiff and unnatural. Let's face it, it is sort of unnatural, as people don't generally go around striking a pose (not since 1990 to my knowledge anyway, when Madonna vogued and lived to sing about it). But if you're holding a pose or acting out antics for the camera, yet you want to make it look real and genuine for the camera, you have to pretty much be a real good actor alongside the ranks of Brando, Olivier or Streep to pull it off to make it look anywhere near convincing and genuine.

But let's face it, most people simply aren't that good at acting. Great acting requires talent, training and practice... and usually a good drama teacher behind you. But your photo session isn't the place to break into acting to try out your hand at it.

But why act if you're already in love? This is where my mind gets befuddled. Maybe I'm mistaken but it seems to me sort of silly to be made to play act like you're in love with each other when you already are in love with each other, and so, wouldn't it be better if you could simply tap into the feelings you already have, and use that energy to bring that dynamic to your portraits, rather than trying to play act at it, only to result in what you know will be an artificial faked moment? Imagine the difference that would make.

Of course if you want reality in your portrait, the photographer has to totally change what they're doing to create a portrait filled with real emotions. You're never going to get an emotionally compelling moment when you're staring at a photographer's finger waiting for him to tell you what to do and when to do it. You've got to be immersed in each other and the moment, and not the camera for this kind of magic to happen.

A sports photographer covering a football victory doesn't tell the Quarterback to act like he's excited about his team winning. A news photojournalist covering a war zone doesn't tell victims of such atrocities to look like they're grief stricken. So it makes perfect sense a portrait photographer doesn't tell couples to act as if they're in love.

In my opinion, it's about photographing emotions.

Here's what happens when you try photographing emotions instead of poses.

The couples' expressions and body language shift to express what they're feeling on the inside, no longer affected by the camera, or concerned about it, posing or wondering what to do or if they're following directions correctly. What flows forth is unconscious. It's natural. We get to see what they're feeling. It's in their eyes. It's in their expressions. It's in their body language. It's in the way they're holding each other and it's in the little things they're doing, the way they're moving in sync with each other, and they're not even aware of it because it's completely natural for them. So they don't have to think about it. They don't have to be directed how to go about it. In fact, they wouldn't be able to make those expressions happen purposefully even if they tried. It's that organic. When the portrait experience itself becomes more emotion filled and natural, then sweet small nuances between the couple are being photographed. It's as if we're peeking inside their private world.

You can't make this happen by counting to three.

The photographer can't make it happen by saying, "hey guys, give me a look that shows how you feel about each other!" That's as useful an instruction as flailing your arms to demonstrate how to look relaxed. Instead you must wait, and you must observe, because you have to see it as it happens, when it comes. And when it does, that's the moment in time which goes into the camera.

And guess what? Because these are genuine reflections coming from their hearts, the resulting portrait is more meaningful to that couple exactly because it's truly about them and not an artificial carbon-copy moment of some cookie-cutter pose that never really was meant to depict who that couple is and what they mean to each other.

So instead of recounting the manufacturing of the photo with stories of how the photographer instructed you to, oh let's say, sit on your fiance's lap and smile at each other (which pretty much gives you an ordinary snapshot anyone can take), you have instead a depiction with more soul to it. A rendering of what's happening inside you, a statement of how much you love each other, and of what these days you have with each other together right now mean to you.

And those become the memories you recall whenever you see a portrait like that.

In my opinion that's what we should strive for. That type of portrait becomes an enduring testament to the couple's love.

By the way, interesting thing about having a more emotion-based photography session like this. Many of my clients tell me how it is they feel closer to each other, deeper in love. It's like a mini couples retreat. What a terrific after effect! But that happens because they were actually feeling it.

I think as an artist one reaches to portray the couple's genuine connection and get that real feeling, and if you do so, you end up with an artful glimpse into their souls. Because a couple's portrait ought to speak a truth to the heart, saying something honest about the people in it, and not say a word about the pose.

G.E. Masana is a portrait photographer and author of the book, "The Couples Portrait: What Love Looks Like." When real emotions blend with visual artistry, the resulting portrait pieces are compelling and stunning. 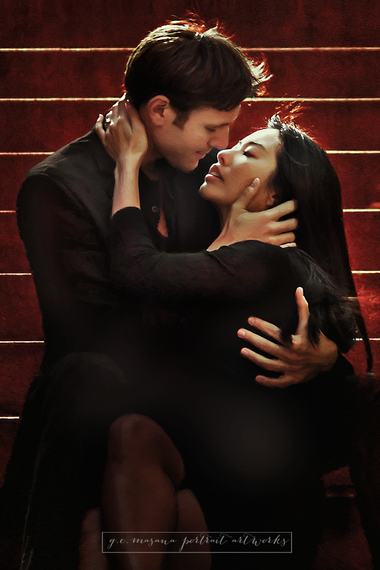