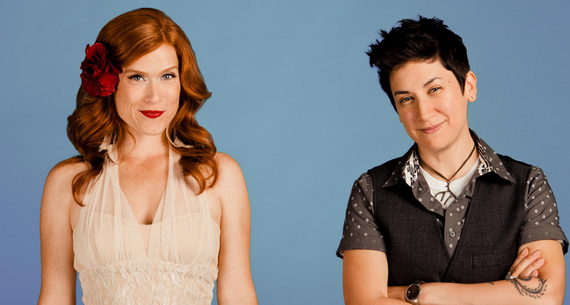 Tylan Greenstein (formerly of Girlyman) and Ingrid Elizabeth (formerly of Coyote Grace) are that charming musical couple that everyone wants to sit next to at the dinner party. Before I even heard them perform, I got the chance to be their dining companion when I met them on an Olivia Cruise.

Once the two, who call themselves Mouths of Babes, did take the stage the next night, I was hooked. And I certainly wasn't alone. The pair was so popular onboard that they had to book a larger venue for their second show.

No wonder. They are an accomplished match. Between the pair, they have created more than a dozen albums and performed in -- literally -- thousands of shows. Their genre? If I was forced to categorize it, I'd call it modern folk. It's powerful. It's romantic. It's giddy. And the two are insanely infectious together onstage, like a musical and a personal love fest all at once. Definitely the kind of music that inspires as much smooching as dancing.

Lest you imagine it was just a phenom of the cruise, let their Kickstarter be an indication. They fully funded their initial goal of $30,000 in the first two weeks. Sounds like fan love to me. Although I got to spend some quality time on the cruise with the married musical pair, I was curious to learn more about what makes them tick.

How and when did you first fall in love with music?

TY: I was raised on a strange combination of early folk music -- Pete Seeger, Tom Paxton, etc. -- which is what my dad grew up listening to, and disco, which is what my mom listened to, and I loved it all. I remember sitting in my mom's car when I was maybe 4 or 5 listening to her sing to the radio and being deeply moved by the lyrics. When I was maybe 12 my dad gave me some tapes of the Everly Brothers and I became obsessed with vocal harmony -- there were two totally different parts to sing that went together! Later on, I realized it was this mix of music and words that made me feel the most alive. It was what I wanted to do with my life.

IE: It's been a lifelong love affair. My parents will attest that, as I learned how to operate a record player at age 1 and was often found head banging in my car seat along to the beat of whatever rock song was on the radio. I grew up with an interesting blend of musical styles -- in my house, The Beatles and Motown were often in rotation, as well as classic rock and Broadway. (My uncle, Tom Eyen, wrote the book and lyrics for the Tony-winning Broadway hit turned Beyonce/Jennifer Hudson movie smash Dreamgirls, which debuted the year I was born and essentially became the soundtrack to my life.)

Those were my deepest musical roots and loves. I have continued to worship music ever since. Coming of age in the 90s, I found myself drawn to country music (being from rural Ohio, it's almost inevitable), neo-soul R&B and the women singer-songwriters that seemed to forge a whole new genre (Sarah McLachlan, Tori Amos, Ani DiFranco, Indigo Girls, Fiona Apple), to which I would say we solidly are indebted.

Where did the name Mouth of Babes come from?

TY: Honestly, when we formed this duo, we spent embarrassingly excessive lengths of time searching for the right name. We wrote long lists of words we like and tried combining them. Nothing worked. Then one morning I woke up and said to Ingrid, "I dreamt we called ourselves 'Mouths of Babes.'" At the time, I thought it wasn't a good name at all. I'm a pretty boyish girl and I didn't think I'd be comfortable being called a "babe." But it stuck, and we realized it works on a lot of levels.

IE: Being the giant word nerds we both are, it was taking us FOREVER to settle on a name for this new project. Once Ty (literally) dreamt up the name "Mouths of Babes," I intuitively knew that was the winner. All Bible quotes aside, the name suits us in so many ways.

How would you describe your music?

TY: Let's put it this way -- my influences are old school folkies and female singer-songwriters of the 90's. Ingrid's great uncle Tommy wrote the show Dreamgirls (yes, THAT Dreamgirls) and she grew up singing along to Jennifer Holladay. So our music is a combination of all those influences. You could call it "soulful folk" or something like that. We play upbeat blues and we play mellow ballads. Lyrics are very important. My (Ty's) songs tend to be darker and more pensive; Ingrid's tend to be lighter and sassier. So our band motto is "All the feelings, all the time."

IE: If Bonnie Raitt and Jeff Buckley played an unplugged duet, you'd get pretty close to the heart of Mouths of Babes. A balance of irreverence and solemnity, celebration and blues, electric folk and acoustic soul. Sprinkled with the musical maple sugar of being truly and madly in love. 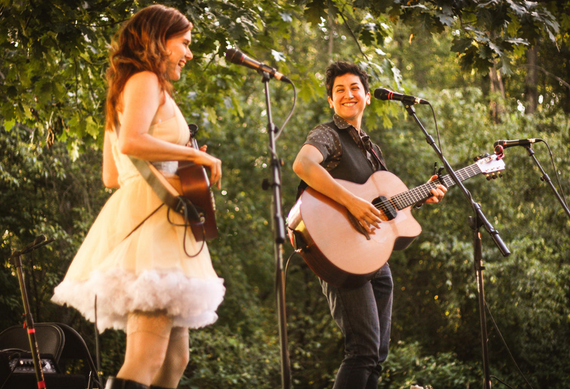 What's it like creating, rehearsing, touring and performing with your wife?

TY: Unlike a lot of couples, we're together almost all the time. You would think that would lead to a lot of frayed nerves or getting sick of each other, but it really doesn't. Fortunately, we're crazy about each other. The biggest thing we have to remember to do is have a relationship outside of work.

IE: For me, it's my absolute dream come true. I have always ever only had 2 life goals: to find my truest love and best match in a life partner, and to be a traveling performer. With her, I get to have both. And furthermore, it came as a complete after-the-fact bonus that we would be able to play together as a duo. First came love, then came music. Because we are so genuinely thrilled to be able to do this AND be together, I find I am able to be all parts of myself on stage and in my songwriting than I have in any other musical project I've done.

What are you up to right now?

TY: We're in the middle of recording our first full-length album with Grammy-winning producer Malcolm Burn! We sought him out because he produced one of our favorite albums, Emmylou Harris's "Red Dirt Girl," which is just a masterpiece. Working with a famous producer is not cheap, so to fund the record, we've been running a Kickstarter, which is doing really well. Right now we're hoping to meet our stretch goal so we can hire a publicist and get the album out there. We're thrilled that the recording process has been funded, but albums without publicity behind them just die these days. We have until Feb 25.

IE: Currently, we're simultaneously in the studio recording our first full-length album and running the Kickstarter campaign to fund it. It's very cool (if not head-spinning) to be making this album and having our supporters in on the process in real-time. There's a lot of really amazing energy flowing into and out of the Mouths of Babes machine. It's truly a thrilling and scary and entirely worthwhile ride.

What is your dream for Mouths of Babes in terms of your future and the musical legacy you'll one day leave behind?

TY: I've been a professional singer-songwriter my whole adult life. I think my biggest contribution to the world is my songs, because essentially I have no real skin and I feel everything very acutely and love to wrap words around the subtleties of feelings and put it all out there. Ingrid is a giant light in the world, and she reminds people that joy is a valid experience. My greatest hope is that our public vulnerability and willingness to be ourselves will give other people permission live a deeply felt life. Mouths of Babes is a relatively new project with a lot of momentum, and it's very exciting. I hope to become less of a "best kept secret" and to reach people on a larger scale in the coming years.

IE: Personally, I just want to spend my days in the service of art and love and directly connecting with people all over the world. The important work I feel our music does is wellstated in our band motto: "All the feelings, all the time." I want our music to give people permission to break the taboos and constructs around certain hushed or shamed topics (grief, political outrage, infatuation, jealousy, suicide, reckless love, etc.), to really be in touch with how they feel, and to share it with those around them. An emotional revolution. A new wave of realness with strong roots in compassion and the dizzy lightness of love. All this to a good toe-tapping, partner-swaying beat. That's the dream.