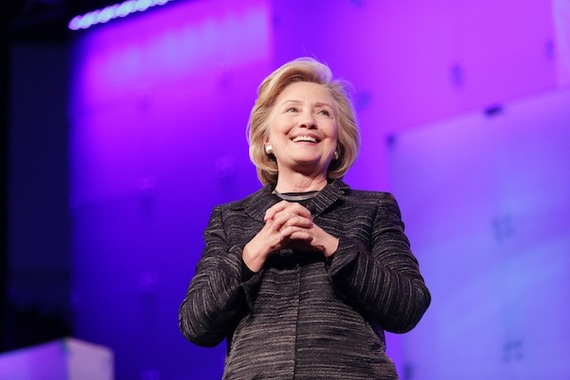 Hillary Clinton stated during her recent press conference that, "No one wants their personal emails made public, and I think most people understand that and respect that privacy." This is true, however most Americans aren't being sued by the Associated Press for access to their 62,320 emails from 2009 to 2013. This lawsuit alone, in addition to the possibility of becoming the first female president in American history, separates the former Secretary of State from every other person who values privacy.

When asked why she used personal emails exclusively, Clinton answered "I opted for convenience to use my personal email account...because I thought it would be easier to carry just one device for my work and for my personal emails instead of two." Again, this could be true, however there are plenty of Americans who use multiple cell phones, email accounts, computers, and even cars for work related purposes. A 2014 Wall Street Journal article titled People for Whom One Cellphone Isn't Enough explains that many Americans actually choose several devices for both convenience and safety:

The average U.S. home had 6.5 Internet-connected devices at the end of 2013, up from 5.6 devices in 2012, according to NPD Group's Connected Intelligence/Connected Home Report.

...The safest assumption, Ms. Sotto says, is, "if you are co-mingling work and play, you should expect that your employer could seek access to the 'play' data."

...Hilda Canes Garduño, a 37-year-old resident of Fairfax, Va., says she has no expectation of privacy as a project manager for the federal government. Her work may be subject to Freedom of Information Act requests, internal investigations and litigation.

...It has become second nature, says Ms. Ifshin, who has had a smartphone since 2007, her freshman year of college. "I guess I feel like if I'm going to have any devices, I may as well have two."

Unlike Clinton, the people interviewed in The Wall Street Journal article have no problem with utilizing several devices at once. In fact, many claim that owning several cell phones is even more convenient than just one. In addition, the article explains that people use multiple devices to enhance security; an issue that Clinton has dodged from the beginning of the scandal.

Like Nixon and Watergate, the longer Clinton evades turning over her emails, the greater the chance that people associated with the former Secretary of State will be asked to lie on her behalf. Similar to Watergate, people could end up resigning from her staff or feel the pressure to leak the information. Or, loyal aides could help her circumvent responsibility from explaining the existence of what The Atlantic describes as a "private server that Clinton was running out of her Chappaqua home."

Therefore, below are four steps Hillary Clinton and her team should take in order to address the scandal from a moral, not simply a public relations (and they're failing at that) perspective. This controversy is about trust, not the rule of law. If the four steps below are addressed quickly, rather than in a tortured process of lawsuits and awkward press conferences, Americans will quickly forget this scandal and move on to other news.

There is no evidence that Hillary Clinton broke any laws or rules.

So, why is this a controversy?

It's a big story for three reasons. First, she has yet to disclose all of her emails. Second, her emails were stored in a private server at her home. Third, the public does not know if "homebrew" servers were safe. Wired has called it a "security fail."

Once the Associated Press has all her records, there won't be any need to battle a lawsuit. Hillary Clinton won't have to answer any questions related to the Freedom of Information Act. In addition, the issues regarding her private servers and potential "security fail" will be mitigated by the fact all her records are in the public domain.

2. Allow a third-party to pick and choose the emails to disclose to the public.

Clinton explained that she was forthright in handing over emails by stating "I responded right away and provided all my emails that could possibly be work-related, which totaled roughly 55,000 printed pages, even though I knew that the State Department already had the vast majority of them." However, the Clinton team decided which emails to hand over to the government.

According to CNN, it was Clinton's choice which emails stayed and which ones were disclosed:

So with her own server, did she also got to handpick which emails went to the State Department for public release, right?

That's right, she and her aides made those calls.

This is an enormous dilemma that Clinton must address sooner than later. She should allow a third-party to sift through her remaining emails, in order to undermine any political attacks in the future that question why she chose to keep certain communication as private.

The GOP won't be able to say a word about transparency in 2016 if this dilemma is addressed quickly by Team Clinton.

3. Explain why private servers, storing public information, were located in a residential location.

"This is the biggie," according to The Washington Post.

Hillary Clinton defiantly claimed "The server will remain private." However, her servers are inherently public since federal communication traveled through these servers. Her decision to store them in her home didn't shield them from becoming public domain; it exacerbated the problem. A recent Wired article states, "the security community is focused" upon the potential of sensitive information possibly being compromised on Clinton's servers.

According to CNN, Americans can look at Clinton's reasoning in two ways:

You can look at this either as Clinton not wanting her private email out in the public. Or you can look at it as if she has something to hide. Americans will remain split -- some will take her at her word, others will fervently doubt it.

Trust will be a key issue in 2016, so an honest answer to this issue will help gain any swing voters lost from 'Emailgate'. The issue of security will also be addressed since the servers can be analyzed.

4. Make sure the Freedom of Information Act isn't a point of contention in 2016.

POLITICO's Josh Gerstein wrote an article titled Hillary Clinton email flap not likely to end soon, explaining why the Freedom of Information Act (FOIA) is a key issue in prolonging the story:

"The problem here is one of government accountability. If you decide to solely use a private email account for years, you make it much more difficult for people of goodwill in a FOIA office or responding to congressional requests to deal with them in a timely manner," Baron said. "This isn't at all consistent with my understanding of open government."

Once Clinton discloses the remaining emails, explains clearly why private servers were used (convenience might not be the only issue), and assures the public that no security breaches took place, then any issues with FOIA will cease to remain contentious topics.

In his iconic interview with David Frost, Nixon stated "It snowballed, and it was my fault." More press conferences, or "press encounters," will only hurt Clinton's chances in 2016. I want Hillary Clinton in the White House instead of Bush, Walker, or any other Republican. However, battling both the GOP and an AP lawsuit won't help in securing another Democratic presidency. Once Clinton addresses the issue of secure servers, remaining emails, and questions regarding security, 'Emailgate' will become simply another political attack, rather than a serious scandal.