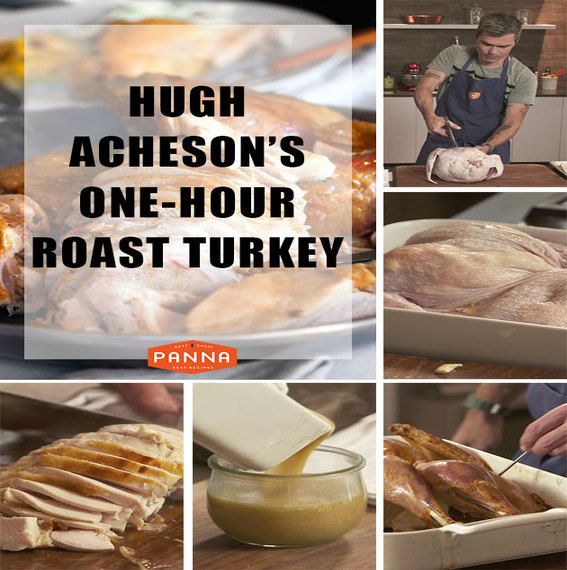 In a perfect world, we would be turkey champions. We would remember to thaw our bird days in advance, brine it, maybe wiggle some butter under the skin. If we were on top of our game, we might even sous vide the whole thing. But when life actually hands us a 12-pound bird on the big day, we do as Top Chef judge Hugh Acheson does: spatchcock it.

Stay with us -- it's not as crazy as it sounds. The word spatchcock (that's shorthand for removing the backbone and flattening out a bird) has its roots in Ireland, where smart cooks have been butterflying poultry since the late eighteenth century. It's with good reason, too: A flattened turkey cooks more evenly, crisps up like a dream, and best of all, roasts in just under an hour. Is it your typical Thanksgiving bird? Not really. But spatchcock once, and you'll never roast turkey any other way. Here's how it's done:

Flip the bird breast-side-down on a cutting board and snip off the back gland. There's no need to bring out the heavy weaponry here -- a simple pair of poultry shears will do the trick.

Spatchcocking isn't complicated, but it is, as Hugh puts it, "a bit of a wrestling match." Cut along the backbone on one side, and then the other. Save the bone, along with any giblets, for later -- it's prime turkey stock material.

These pesky little things burn quickly, so set them aside for gravy.

4. Get handsy with your turkey.

Here's the fun part: Get in there and flatten that sucker down. This will expose the thighs (usually undercooked) to more heat and the breasts (usually overcooked) to less, so everyone wins.

Be sure to season both sides. If you brined your turkey the night before (admirable), tread lightly.

Arrange your turkey in a lightly buttered roasting pan, slightly larger than what you would normally use for a whole bird. Once it's nice and snug, slide it into a hot oven at 475 degrees for the first 15 minutes to crisp the skin; then, lower the temperature and let it finish cooking. This should take 55 to 60 minutes, or about 5 minutes per pound.

More: While you wait, here are 11 Thanksgiving sides you can start on.

Insert your meat thermometer into the thickest part of the turkey. When it reads 160, you're golden -- as it rests, the internal temperature will continue to climb to the USDA-approved 165 degrees. In the mean time, pour yourself a drink. You deserve it.

Get the full One-Hour Roast Turkey recipe on Panna. 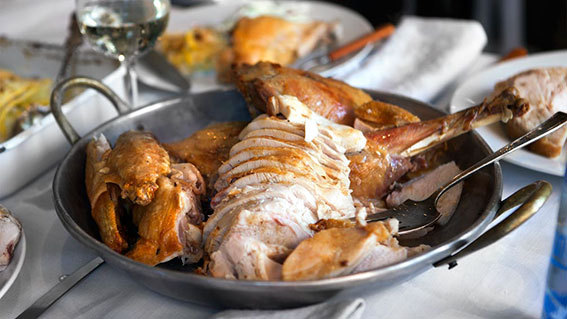