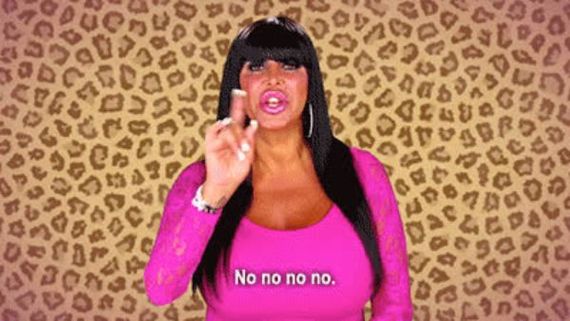 As Ted Cruz finally dropped out of the race last week, and Trump seemed to solidify his position as the Republican candidate, I heard a lot of people asking this question:

"Know any nice places in Canada?"

Any time anyone asks me if I am moving to Canada if Trump becomes President, or hints that they are planning an escape to the Great White North, I become Effie from Dream Girls, and right on the spot feel like I need to belt out "And I am teeeeelllling you! I'm NOT GOING."

Yes, I think Trump would probably make life harder for Muslims in America (and for Americans in America in general), and I love that Canada has Justin Trudeau and hockey and maple syrup and all that jazz, but these are still not reasons for me to leave.

Not when I have so many reasons to stay.

***Notice that the reasons below are the things that I love about America, but these are not the things that make me an American. If I got off a boat or an airplane and became a naturalized citizen YESTERDAY, if I spoke little English and wore a niqab, if I were more religiously conservative and didn't like cheeseburgers or football, I would STILL deserve to live here and to be treated with respect; I would still be an American even if I didn't fit someone else's definition of what that means. And Trump still wouldn't be able to scare me into buying new snow gear and donning a Canucks jersey.

First off, I am an American. This is reason number one why there's "No, no, no, NO way," I am leaving the US. I was born here, I was raised here, I will probably die here. Why? Because I LOVE IT HERE. I love summers in Minnesota and seeing my cousins skip rocks on the Mississippi. I love hiking in California and taking photos in Arizona's Painted Desert with my grandfather. I love baseball and hockey and rock music and American food.

I love being able to practice my religion the way I see fit. I drive, I work, I wear hijab because I want to. I also swear like a sailor, hang out at bars, identify as queer, and don't get judged or punished for my differences or transgressions by people who think they are somehow closer to God than I am because of their proximity to Mecca (cough cough, Saudi government).

I love American culture, the American landscape, and my identity as an American. I love that this is a country where anything can change, and while I am often critical of America and her policies, I would not call any place else home.

2.  My family fought hard for freedom and civil liberties.

And in staying here, I pay tribute to them and the sacrifices they made. There has been a military serviceman (or servicewoman) in my family since the Civil War, when my many-times great grandfather had his house burned down by his Confederate brothers-in-law for being a Union sympathizer, and quickly joined the Yankee army.

Both of my maternal great-grandfathers fought in World War II, and came back with the hope that because of their sacrifice, tyranny would no longer shackle Europe and their children would grow up with the compassion they needed and not the violent egoism of dictators.

Other family members have deployed as active military to Iraq and Afghanistan, and while I disagree with their decision to deploy and participate in what I consider a culturally-imperialist and immoral war, I understand that they were hoping, as individuals, to protect democracy and liberty for Americans and others. I deplore their methods, but I entirely understand and respect their adoration for  the civil liberties we enjoy as Americans.

My Irish ancestors came here in the early 20th century, seeking security and the American Dream, and saw signs saying "NO IRISH" plastered in towns where there was no work for those fleeing the long-lasting consequences of English imperialism and the potato famine.

Similarly, my father, the son of Palestinian exiles and Al-Nakba survivors, came here from Kuwait seeking a better life for himself and his family in the 1980s. He learned English, earned a Master's degree, and worked hard to earn and keep a place in America, enduring many hardships and much bigotry along the way.

In staying in the country my ancestors fought so hard to reach and stay in, I honor their struggles, and continue the fight to make America a place worthy of people like the Hameds, O'Connors, and McGoverns.

3.  Future generations of Muslims are depending on me.

And not just Muslims. Mexicans, gays, women, Jewish people, African Americans, Sikhs, Hindus, and anyone else disparaged and "othered" by the hateful rhetoric spewed by Trump and his ilk are depending on me to stay strong and stay put. It is incumbent upon me to stick up for myself, for others, for anyone, against xenophobia and hatred.

I don't want to see little girls crying and packing their teddy bears into suitcases because they worry that the military will come deport them if Trump is elected.

I don't want to see Sikh and Hindu Americans assaulted and terrorized because Islamophobic rhetoric makes any brown person with facial hair and a head-covering suspect.

I don't want rights for queers and women to disappear in a fog of bigoted fear-mongering.

I don't want African-American communities to  experience brutality because of long-standing misconceptions that were created hundreds of years ago and persist in ignorance today.

I don't want future Muslim girls to pin their hijabs down extra tight because they know some boy at school will pull it off.

I don't want future Muslims feeling they have to change their name from Jawad to John just to avoid persecution.

Muslims are major contributors to this country in many fields, and I want to make my mark. For Islam, for women, for myself, I want to put my art out there, and make my contribution to society.

While Muslims like Ibtihaj Muhammad and my personal girl-crush Linda Sarsour are already doing awesome things in the U.S., there's more to come. I want to be one of the Muslims fighting to make my country as amazing as I believe it can be, and I think the rest of America is going to want to stick around and see just how much we can give to this country.

Many of us have already faced backlash and Islamophobia, and we know there is going to be more. We could get on our knees and beg and plead for you to like us, we could change our appearances, our names, and our customs and "assimilate," but that is not who we are. Unlike political candidates, we don't pander, and we don't really care what you think of us.

Let's take a quick look at Moe Shama. He made an awesome video of his family car-karaoke-ing to Queen's "We Will Rock You," and people lost their minds.

Muslims, behaving like....Americans! Who would have thought?

The point of the video was to show that we are not who you think we are.

We are not miserable, or oppressed, or driven by hatred. We're part of the fabric of America now. A new, interesting, sometimes weird thread being woven into the tapestry of American history.

We don't really care if you love us or not.

We are Americans. And we're not going anywhere.