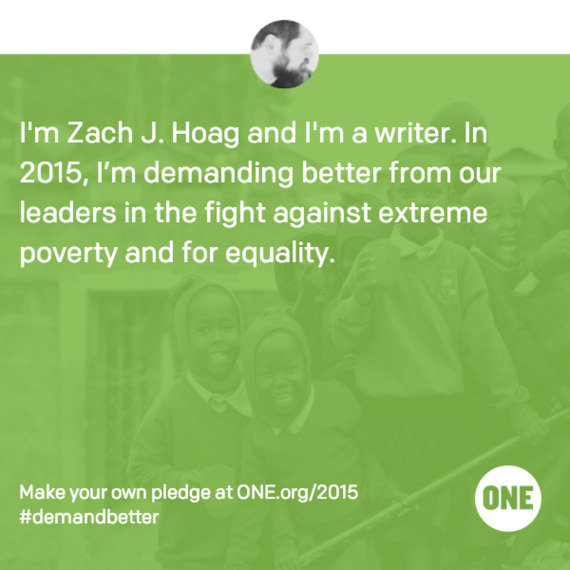 In life and in ministry I've always held to a strong belief that we need to act locally -- to put feet to our gospel and do the hard work of finding and meeting the deepest needs in our congregations and communities.

I've tenaciously held to the conviction that as we do justice and compassion in the neighborhood, our local churches become outposts of the kingdom, little hubs emanating the energy of heaven, healing and restoring real people, right in our backyard, in a holistic way -- spirit, soul and body.

And I continue to hold this conviction.

But I'm beginning to realize that it is not good for local action to be alone. Just like the well-worn adage goes, it is important that Christians and churches everywhere continue to think globally even as our hands and feet are engaged in the work of healing here at home. And by thinking globally I don't just mean giving global issues like extreme poverty and inequality a passing thought, but dedicating our hearts and minds to advocacy for these issues as the Spirit leads.

The relationship between church and state can be a tenuous one -- as an anabaptist-leaning thinker, I believe it's an important distinction to uphold to say the least. But on grand-scale issues like extreme poverty, how on earth can we not acknowledge the role that governments play in human health and flourishing? It is one thing to separate the fundamental role of the church from that of the state. It is quite another to cynically conclude that their interests may never overlap or that partnership and collaboration is somehow impossible, particularly when aimed at healing the deepest maladies afflicting all the precious people on this precarious planet today. Indeed, the church should be a prophetic voice for moving the resources of governments toward promoting human flourishing (instead of so often contributing to destruction).

This is what excites me about organizations like the ONE Campaign. While churches and other local ministries are rightly dedicating the bulk of their active resources to building the kingdom in their neighborhoods, they can yet raise their thinking and advocacy to the most urgent needs on earth -- literally. ONE is working tirelessly with governments, NGO's and all manner of aid groups, faith-based relief orgs, global ministries, etc. to see that these needs get met.

And most importantly, their work is making a significant dent in the most significant injustice facing our generation: extreme poverty on a global scale, human beings attempting to subsist on less than $1.25 a day.

Since the Millennium Development Goals were set in the 90's, the rate of extreme poverty has been reduced by more than half. Now, that work certainly transcends ONE, but consider how ONE has raised the level of consciousness in the developed world to respond to extreme poverty over the last 10 years! Also consider that during that time ONE has led the charge in the fight against AIDS, helping to increase the number of people treated to 9.7 million from just 300,000 ten years ago. And that is to say nothing of other ONE initiatives saving children from curable diseases through vaccination, drastically reducing malaria deaths and fighting government corruption that perpetuates poverty and inequality.

2015 marks a point of incredible progress.

But there is so much more to do.

There are still 1.2 billion people in extreme poverty, and inequality and environmental destruction are at dangerous levels across the globe. In order to continue the progress, eradicate poverty, reduce inequality and respond to climate change, significant work must be done starting this year. ONE is spearheading action/2015 for this reason, and there will be two important meetings of global government leaders later this year that may very well determine whether this progress continues.

In prayer and reflection lately I keep getting the sense that 2015 is a very important year -- on lots of levels. Maybe it's the charismatic side of me coming out, but God seems to be moving in a special way if we have open eyes and ears and hearts to respond.

And that begins at the local level, in your parish, in your city, responding so that God's kingdom would come and his will would be done right there. But it extends beyond the local too. I think one way to respond to what God is doing this year is to pledge to think globally on these big issues -- these most pressing injustices and emergencies on our planet today.

As a local faith leader, I pledge to think globally in 2015. And I commit to do so in collaboration with the efforts of ONE.

I'd love it if you'd consider doing the same.