With the explosion of people taking on on-demand work there's little doubt that the gig economy is exploding. Just last month, LinkedIn jumped into the gig economy with its new portal for freelancers. The growing desire to generate supplemental income through side jobs is great for workers and businesses alike, but an important question persists: why is this happening?

There isn't an easy answer to that question. People are drawn to the gig economy for a myriad of reasons, depending on their goals, skills, and circumstances. To learn more about those reasons, Gigwalk surveyed over 1,000 freelancers and on-demand workers on their background, their experience with the on-demand economy, and their opinions on the future of work. Their responses illuminate the appeal of on-demand work as more and more people drift away from traditional 9-to-5 roles. 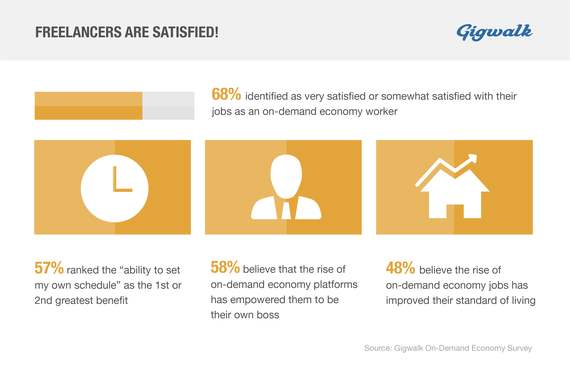 The gig economy is sometimes portrayed as a secondary paycheck, but plenty of people are making a full-time job out of their gigs. Roughly 60 percent of respondents said on-demand work was a source of extra cash, with a third saying it was their primary source of income. While we expect on-demand work to be a secondary paycheck for most, there's little doubt that people can make a living from this type of work if they so choose. In fact, the extra cash that workers can make from the gig economy is improving quality of life for many.

On-demand workers are seeing their standard of living improve because of the gig economy -- 48 percent of respondents said so. This isn't to suggest that 52 percent are seeing a lower standard of living, though. A substantial portion of respondents were neutral about this question -- meaning the gig economy is enabling them to maintain their current lifestyle. That freelancing has become a source of upward mobility in part explains its growing appeal. It's also keeping workers sane, our data reveals. 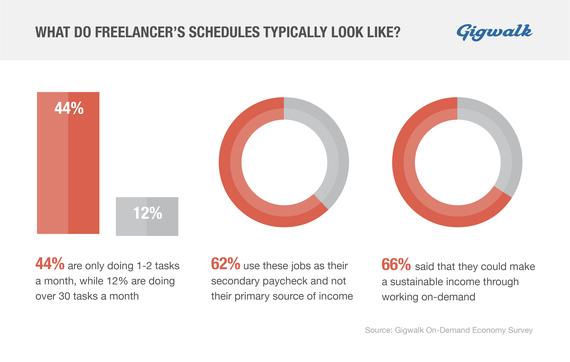 Finding the right work/life balance is something we all strive for. And while it might seem that on-demand workers are on-call 24/7, a substantial portion of people we surveyed -- 43 percent -- said the gig economy was actually improving their work/life balance. For many, the flexibility to work when and where they choose is enabling people to live more balanced lives. This, unsurprisingly, correlates with a high level of optimism about the gig economy's future. When we asked workers about the future of on-demand jobs, a resounding 39 percent said they expected the gig economy to grow by at least 25 percent in the next three years. This shows that people are optimistic about the gig economy and its impact on their lives.

These findings are just a handful of explanations for the rise of the gig economy. People all over the country are getting involved, whether it be to pursue a higher standard of living, find a better work/life balance, or create a new primary source of income. It's no wonder why traditional workers and on-demand workers alike are getting in line to participate in this new era of work.