Spontaneous trading erupted last week on New Year's Eve, the official launch of the NYC Bitcoin Center. Hundreds of eager cryptocurrency enthusiasts gathered to usher in the New Year and celebrate the grand opening of the center, the first of its kind in the world. Keynote speaker Congressman Steve Stockman (R-TX) shocked the crowd by taping a QR-code to his suit, accepting Bitcoin donations for his 2014 Senate campaign, the first U.S. Senate candidate to officially embrace the cryptocurrency. It's fair to say that cryptocurrency is here to say, but what exactly it will be used for is unknown right now -- that's where the NYC Bitcoin Center comes in. 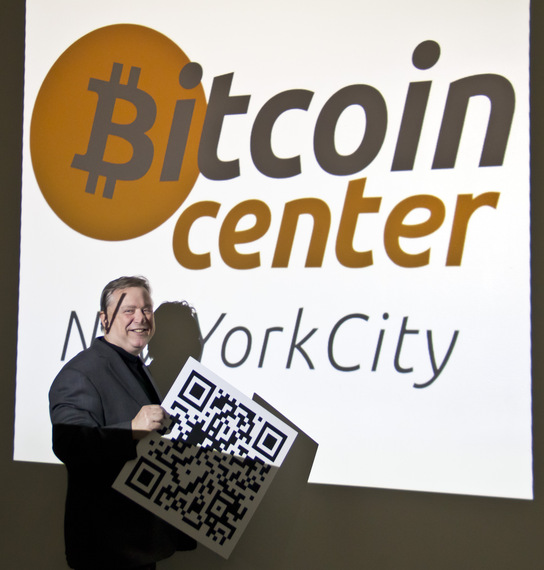 Veteran New York entrepreneur Nick Spanos, one of the center's co-founders, rose to address the crowd shortly after midnight, and was greeted by the boisterous shouts.

"I'll pay $700 for one Bitcoin!" yelled an enthusiastic twenty-something. Within moments, similar cheers rebounded throughout the hall. The energy was truly incredible.

Within moments, dozens of individuals were holding up their smartphones, their QR codes poised to receive Bitcoin.

And so, a mere 100 feet from the doors of the New York Stock Exchange, where since 1817, traders have gathered before the Big Board to trade U.S. dollars for stocks, that night, at 40 Broad Street, hundreds of Bitcoin traders brought that tradition into the 21st century. 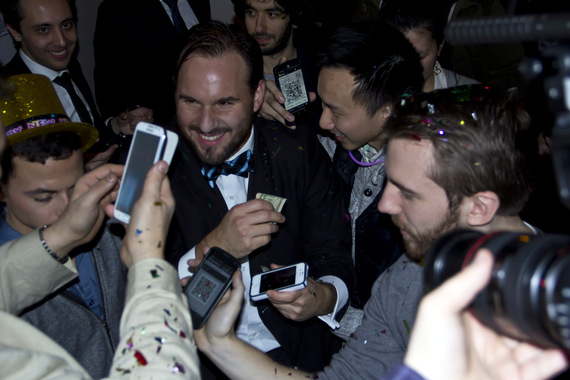 The NYC Bitcoin Center is the premier educational institution dedicated to promoting awareness of competing cryptocurrencies and aims to be a hub for innovation in the financial tech space. Founded in 2013, the center's board consists of leading entrepreneurs, policy makers, and thought leaders. What better than a group of successful people who see utility in something, and want the rest of the world to see it too?

We've all heard about Bitcoin recently. It's in the news everywhere, but most people don't understand what it is. This center is trying to change all that. It's sort of like when the Internet was first released. Was it a digital library? Maybe it was a digital post office? It was those things, but it was also so much more. The possibilities behind it were endless, and as we're still seeing, abound. No one knows what cryptocurrency will be used for in 20 years, and so the exploration the Bitcoin Center will allow is necessary.

In essence, Bitcoin is a decentralized, digital-only currency. There is no central monetary authority with it like other currencies. Rather, a peer-to-peer computer network maintains the transactions, and makes Bitcoins through the process of mining. There are no international exchange rates, and no middlemen collecting fees on it. Transactions are processed through particular Bitcoin wallets, which are apps that can be downloaded onto computers or smartphones. Buyers and sellers are identified not by their names, but by a digital wallet address, which is a string of numbers and letters. These wallets are relatively easy to open. At the launch party everyone was helped in creating his or her own Bitcoin wallet, and everything inside was for pay with Bitcoin only; the bar was not accepting cash.

Introduced in 2009 by Satoshi Nakamoto, likely a pseudonym, Bitcoin is one of many cryptocurrencies available today. Yet, despite years of being available, few still understand it. The NYC Bitcoin Center holds educational seminars many days a week for no cost to help educate investors and the general public about Bitcoin. In the last 30 days, Bitcoin price has been as low as $465, and as high as $1026. There are clear high levels of volatility in it, but such upward swings also indicate something worth investing in.

Bitcoin has only been around for a few years, but has quickly proven to be a force to be reckoned with. If Bitcoin isn't successful, it's still certain that digital currency is here to stay. With everything moving to digital in the past 20 years, it only makes sense for money to do the same. What exactly will make the public see this? Who knows. But the NYC Bitcoin Center will definitely be a catalyst in making the process happen so go check it out!