I decided to join a support group. But even though I fit every description of every psychological disorder in every self-help book out there, I couldn't quite find a group that "got me."

So I figured I would start my own. How hard could it be? Give the younger kids to my ex-husband for the night, put some folding chairs in a circle in my living room, set out some grapes and throw out a topic. Easy peasy lemon squeazy. Oh, and I might serve lemonade. That was always refreshing.

I put this announcement online:

"Hi I don't want to use my name but I'm starting a support group for women. I worry a lot so I was thinking of calling it, WWW - 'Women Who Worry,' but we can tweak when you get here."

The first two calls were from women worried they didn't know how to twerk, until I explained what I meant by tweak.

Since this was to be an anonymous support group, I will not use any names below to convey the dialogue at our first meeting. It could be any woman saying these things. And trust me, it was!

Well, I worry that what I worry about will actually come true. Kind of like the opposite of "The Secret."

Can this also be a support group for women who have never read "The Secret?"

How about women who really hate "The Secret?" Secretly, of course.

I recently read somewhere that the act of worrying itself is eventually what we'll die from.

Ladies, can we get started? We'll call it "Women Who Worry Too Much Or Not Enough and Aren't Sure How They Feel About "The Secret" but Don't Want to Die."

And The Men Who Love Them?

No men. I would need to wear foundation. And my skin really needs to breathe.

How about we focus on Joy instead of worry? We'll be The Joy Club.

When and where will you provide childcare?

That's just like you! I knew you would assume that women our age would all be mothers.

Don't say that. My name is Anonymous. You don't even know me.

I know you're catty.

I wish I could be a mother

I wish I had a mother.

I wish my landlord let me have a cat.

Well, if all 17 of us pitched in, I suppose my eldest daughter could babysit for an hour upstairs. Say $2.00?

If we pitched in $5.00, do you suppose you could hire a house cleaner?

Shouldn't we have said the Serenity Prayer by now?

I think this group could use more tweaking -- er, twerking.

Or maybe we could all turn our chairs toward the wall and sit facing away from one another.

After they left, I was exhausted, but stayed awake all night tossing and turning. I toyed with starting another support group for women with insomnia. But when would we meet? We'd be too tired during the day from being up all night. We could meet evenings, but we'd want to turn in early to try and fall asleep. Finding a convenient time was definitely a worry.

To distract myself, I read slips of paper I had all the women leave in the Suggestion Box before they left. It was mainly filled with more names of support groups they were suggesting I start.

And there was one question:

Will you ever have anything to eat other than grapes and lemonade? I have IBS. It would be refreshing if you could serve other refreshments.

At the next meeting I decided to do more of the talking and be more bold.

Thank you all for coming back. I wonder if some of you feel as exhausted as I do. I was thinking of starting a group for insomnia, but I couldn't figure out when we could meet.

Cute. So I've gone over all the suggestions and I've decided there's one name that will encompass everything.... Ready? It's quite brief. "Dysfunctional Households"

But I live alone.

Uh, I'm a guy, so this might be a typical male question. But by Dysfunctional Households, do you mean when the dishwasher and the floor sweeper break down?

No, I don't mean appliances. I mean people.

Well I AM the dish washer and the floor sweeper.

Welcome to our group.

Great. Just great. Does anyone have foundation in a porcelain beige shade I can borrow?

After they all went home, I knew I would never mention it, but secretly I would change the name to "Women Who Start Support Groups To Feel Important But Instead Feel Put Out."

And as far as worrying? I was no longer concerned at all. I now had plenty of new material for tons of Huffington Post blogs about women! 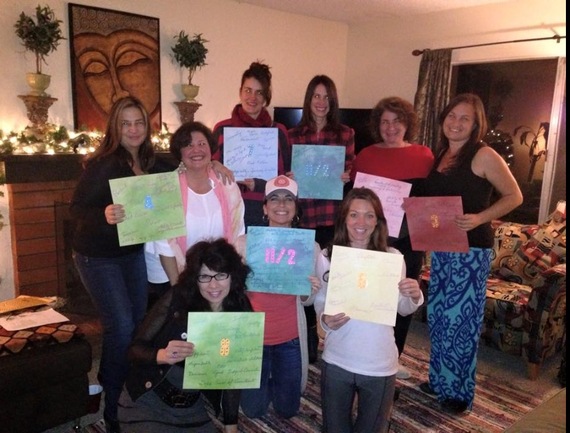 The author (bottom left) really is in a woman's group called "Joy Club" but they don't ever turn their chairs to face away from each other!

For more female humor, check out the author's personal blog "Once Upon Your Prime!"