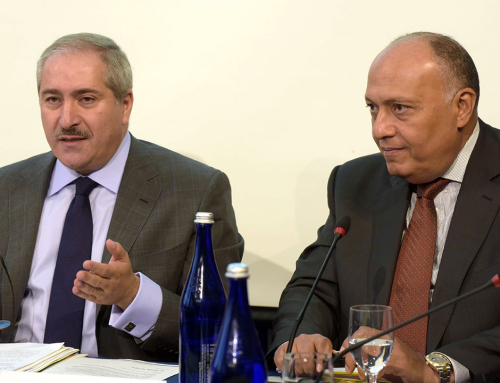 It was a headline week for the protection of cultural heritage.

When leaders from more than 160 countries gathered in New York City last week for the 70th Session of the United Nations General Assembly (UNGA), a main topic of discussion for the attending heads of state was how to combat the growing strength of violent extremist groups in the Middle East.

Critical to this effort is cutting off all possible sources of funding that support terrorist organizations such as ISIS. While Al Qaeda depended on donations from rich benefactors, ISIS has robbed, extorted, and kidnapped its way to becoming one of the wealthiest terrorist networks in history. The looting and trafficking of antiquities has played a key part in this economic strategy, while the destruction of cultural, historic, and religious sites has guaranteed newsheadlines and further terrorized the local population.

This past week, UNGA served as a platform for bringing together the key players from leading countries, international organizations, and law enforcement agencies, as well as the arts and archaeological communities, in a series of conferences to seek innovative solutions to halt the trafficking of "blood antiquities." Never before has there been this level of political will from the global community in seeking real solutions to this cultural, economic, and security crisis. Hopefully, this recognition will lead to meaningful action.

On September 24, the Antiquities Coalition, with its partners the Asia Society, Middle East Institute, and UNESCO, hosted a solutions-oriented forum with the Foreign Ministers of Iraq, Jordan, Egypt and Australia, in addition to senior delegations from Cambodia, Italy, Qatar, Saudi Arabia, and Thailand. This unprecedented gathering brought together policymakers and leading experts to develop and implement recommendations for halting this black trade.

From this event, the #CultureUnderThreat Task Force will be launched comprised of law enforcement agents, business leaders, anti-terrorism experts, as well representatives from the arts and antiquities communities. This group will work to raise awareness about the linkages between the cultural racketeering and terrorist financing, close down markets to blood antiquities, and provide in country support to those who are risking their lives to protect our shared heritage. The task force will publish a set of recommendations before the end of the year and work with key stakeholders to realize their implementation.

Three days later on September 27, the United Nations also launched a new initiative, chaired by the Foreign Ministers of Jordan and Italy, with strong support from UNESCO, the U.N. Office of Drugs and Crime, and Interpol. This initiative aims to strengthen the political determination of member countries to take the necessary steps to shut down the illicit trade. The five partners have committed to a multifaceted campaign focusing on three aspects:

As a special guest, Fatou Bensouda, the Prosecutor of the International Criminal Court (ICC), joined the proceedings by video to announce the arrest of Ahmad Al Faqi Al Mahdi, a senior member of the Ansar Dine, a terrorist group with connections to Al-Qaeda. He is charged with the intentional destruction of religious and/or historical monuments in Mali. This case sets a precedent as it is the first time that destruction of heritage is being treated as a crime of war by the ICC.

This event was followed on September 29 by another major program, in which the State Department, brought together law enforcement officials from the FBI, UNODC, and the Department of Homeland Security at the Metropolitan Museum. For the first time, U.S. law enforcement provided extensive (and recently declassified) evidence of how ISIS is benefitting from the trafficking of antiquities. The extremist organization is actively promoting plunder for profit by granting permits for new digs and taxing the sales of illicit gains, as well as raiding archaeological sites, museums and warehouses. These officials confirmed that the United States is one of the largest markets for these blood antiquities.

Even more importantly, law enforcement officials put the community on notice that the federal authorities are cracking down on illicit sales, and will take severe action against those that are knowingly supporting terrorism through the purchase of blood antiquities. 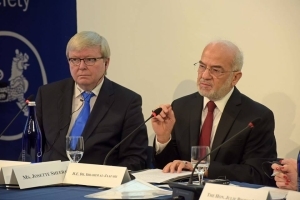 Heads of state also reconfirmed their commitment to fighting against the intentional destruction and trafficking of heritage. As part of the Leaders' Summit on Countering ISIL and Violent Extremism, members reiterated their support for cutting off sources of funding for extremist groups. The development of an informal Public-Private Partnership to protect antiquities in Syria and Iraq was also announced, although details are limited on the partnership at this stage.

Lastly, no greater authority than Pope Francis, the unparalleled star of the past week, noted in his speech before the United Nations,

"...regarding to the painful situation of the entire Middle East North Africa and other African countries where Christians together with other cultural or ethnic groups and even members of the majority religion who have no desire to be caught up in hatred and folly have been forced to witness the destruction of their places of worship their cultural and religious heritage their houses and property and have faced the alternative either of fleeing or of paying for their adhesion to good and to peace by their own lives or by enslavement."

Political will to take action is one of the critical elements necessary to successfully halt the trafficking of blood antiquities. A significant step forward has been taken this week in raising the profile on this heinous crime - as well as some initial steps towards cracking down on those who allow it to continue. There is still a significant challenge ahead of us in bringing a halt to this activity.

We encourage all of you to join in this fight. And please don't buy blood antiquities.