This essay will accompany an exhibition of the artist's work next month at Arthea Gallery, Mannheim, Germany.

Hermann Lederle's "Adaptation," 2015, is massive. Measuring five and a half feet by ten feet, this totemic monument doesn't just envelop you, it anchors you to the ground. Reminiscent of partially open Levelor blinds, a network of dense and narrow vertical bands sweep across the canvas. There's more weight at the center; this makes the surface quiver and shimmer, like water burbling over an outcropping of coral just beneath the surface of a roiling sea. Without fully revealing it, the piece suggests an expanse of pictorial depth. It accommodates something that is turbulent and veiled, expressionistic and controlled. This balance suggests a mystery, a conundrum, a koan.

You read it up and down, down and up, systematically working your way across. A crescendo from left to right, a climax at the middle, and then a denouement until the right edge. Structurally it's the painterly equivalent of Guillaume Apollinaire's pictorial poem, "Il Pleut," from his 1918 book, Calligrammes. The lines of the poem are vertical, to simulate falling rain that evokes memories of women in the poet's life.

The piece began with marks on the canvas. His signature, in the lower right corner; Japanese words near the left edge, vertically arrayed, that correspond to young Japanese daughters and an ambiguous amalgamation of a term that suggests Japanese trust fund sons and Goths. Given the piece's up and down rhythm, it invites a comparison to the fair Juliet above on her balcony being courted by her swain Romeo down below. Those vertical bands consist of the vivid and expressionistic decades-old paintings that Lederle has painstakingly hand-cut and then collaged onto the canvas, leaving just enough space so that the original marks show through as interstices of the canvas. Punctuated with a stop and go rhythm, the work reigns in the artist's prior spontaneous flourishes. Each scrimmed line brims with its own gravity. Overall it packs a powerful existential wallop. As such, it makes you wonder what Jackson Pollock's drip paintings would have looked like if he had worked off of an easel.

An inspired piece, the work lays bare the source of artistic inspiration. The work corrals something prior and powerful, something that had once been deeply felt and is now remembered. It doesn't push this feeling into the background; it leavens it with the consolation of memory. The work waxes humorous, a literal application of the way an artist's new painting builds on what went before. "Adaptation" looks backward to move forward. Besides the emotion, besides the humor, the work feels wise: the product of adapting to things pictorial and, thus, personal with the perspective of age. 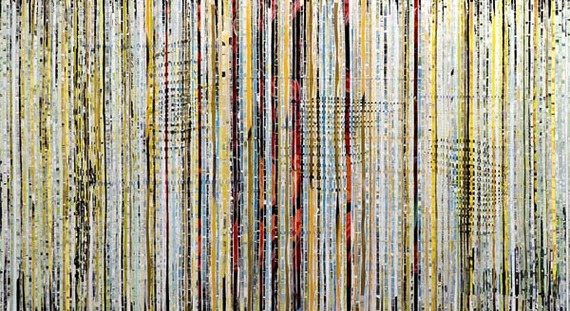