Mittens the cat has both male and female genitalia.

The Canadian kitty, who lives with its owner in Heart's Desire, Newfoundland, will need surgery to cure its bowel and urinary problems as a result of its dual gender, CBC reports.

Colleen Clarke-Murphy took Mittens in when her daughter brought it home, thinking it was a stray. In October, Mittens was rushed to a vet, who gave the surprising news. Clarke-Murphy said her first response was, "Did I just hear you right?" 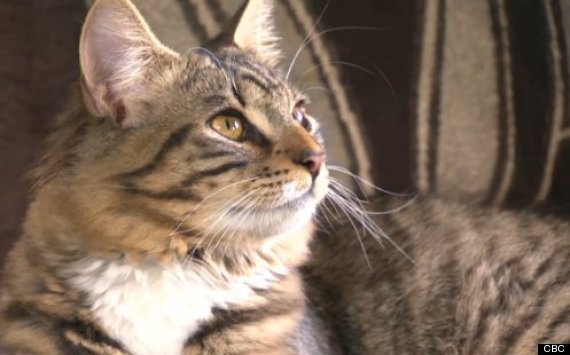 Since gender assignment surgery is more a medical need than a cosmetic one, the initial question was, which gender should Mittens be?

Clarke-Murphy said she'd rather have a female cat, but she'll follow the veterinarian's recommendation to make Mittens a male.

Mittens will need to be both spayed and neutered before the $1,500 reconstructive surgery. Good luck, Mittens!

Twinkle's vet recommended that the male parts be removed, and made it so. The feline is reportedly doing well -- alongside her brother Socks -- after her gender assignment surgery.