Hermes, the Greek God with wings on his shoes and wide-brimmed hat, carries a caduceus staff (winged rod with two snakes wrapped around it). Known to the Romans as Mercury, Hermes is also the Lord of Information: patron god of... geeks. 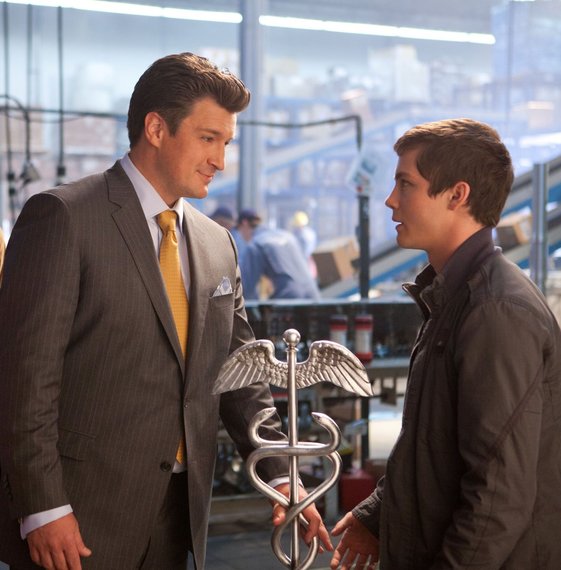 But, geeks don't only obsess about digital-technology or derivatives, some geeks are enthusiasts for wine. Or genealogy. Or Buffy the Vampire Slayer. Anytime we place great attention to technical detail about a subject (think news junkie or sports fanatic) we are geeking-out with Hermes.

Why should this matter? Many people are looking to succeed in their lives, whether career, creativity, or heath. Given Hermes' areas of influence it could be beneficial to tune-in to him.

A quick and cunning messenger of the gods, Hermes is protector of travelers, thieves, and the marketplace. The essence of the mercurial nature can be seen in our current financial system: banks and investment firms staffed by a cadre of obsessed analysts (geeks) in New York and London who forecast information they've gathered.

Although Hermes is a geek's benefactor, there is more to him than mining data streams. Hermes' winged boot sells radial tires (Goodyear), Hermes as Mercury Man peddles spring bouquets (FTD Florist), and his caduceus is a symbol for medicine (American Medical Association).

Mad Men's Don Draper and gossip blogger Perez Hilton both resonate with Hermes. Hermes was featured in the Disney animation Hercules (1997), voiced by David Letterman's musical director Paul Shaffer. But my favorite is Nathan Fillion and his comedic flair as Hermes in Percy Jackson: Sea of Monsters (2013) based on the book by Rick Riordan (forward to 1:15 in the trailer to experience Hermes).

When it comes to politics, Hermes excels at peaceful negotiation, trade and diplomacy. Consider White House Press Secretary Josh Earnest, whose last name epitomizes the essence of a spokesperson. The best way to see the Press Secretary (and Hermes) in action, is to watch the television serial drama The West Wing and Allison Janey's portrayal of Press Secretary C. J. Cregg.

Thank You for Smoking

Because of his eloquence, Hermes can be aligned with trickery, thieves, and spin-masters. The 2005 comedy Thank You for Smoking, starred Aaron Eckhart as Big Tobacco's chief spokesman who lobbied on behalf of cigarettes using manipulation and heavy spin tactics. Not every PR agency uses deception like Hill+Knowlton or Burson-Marsteller -- shills for the tobacco industry in the '50s, '60s, and '90s -- but they all echo with Hermes' influence.

Why Partner With Hermes? 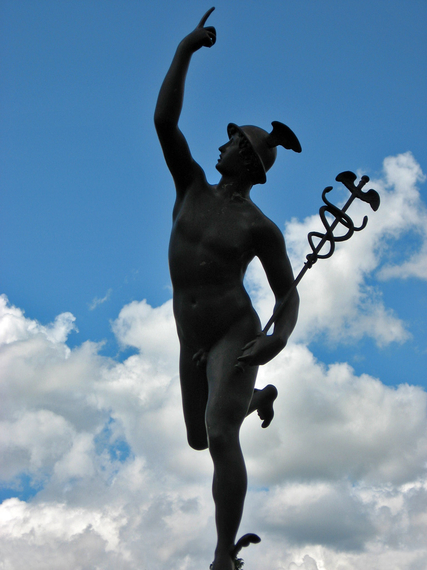 Since ancient times, people have been looking to Hermes for assistance. The Orphic Hymn to Hermes (late Hellenistic, 3rd or 2nd century B.C.) identifies Hermes as a celestial messenger, many-skilled, the "source of gain" who increases memory and provides graceful speech.

"One gains the character of the deity you invoke. The power of communication, wielding symbols, the ability to reach across all divides/cross any thresholds to reveal the truth. That's why Hermes is so funny, he's the big reveal," Webster says.

So, if your computer isn't functioning properly, why not ask Hermes for assistance? Need to petition your boss for a raise? Call on Hermes. Running late? Use a traffic app, and ask Hermes for help.

So, how do you cultivate a relationship with the Messenger God? Webster says:

Get to know Hermes, pay attention to his character and note him wherever he is. Look for the scribe, the technologist, any maker of things, the eloquent storyteller. Recognize him. This is how you first learn to deal with a god is in his/her activity.

Then, take a moment to put your attention on that occurrence or manifestation of Hermes around you. When you pass the IT guy in the hall, when you see an FTD florist advertisement, or when you walk through a doorway, bless -- or establish -- a positive regard for Hermes. Maybe just say hi, "Hail Hermes", or some other way to positively connect with his energy.

At The Dark of the Moon

If this sounds intriguing, then take the next step. Create an altar to Hermes with a blue cloth, a statue or picture, cedar incense, and a small stone (or herm) standing upright in salt or uncooked rice. At the new moon, when there is no visible moon in the night sky, make Hermes an offering: light incense and offer some coins or trail mix to deepen your relationship with the god of travellers. Say something heartfelt, then pour water, wine or beer into a travel mug and empty it into the sink or ground when you're done.

Sure, there are people who would scoff at all this. Worship Greek Gods? In the 21st Century? But as geeks and nerds know, sometimes you have to explore new data in order to get a desired result. Why not ask Hermes to help you geek-out a part of your life? You might get surprising results. But remember, Hermes is also a trickster god, so be careful what you ask for...