Hernan Bas isn't sure if he's 33 or 34 years old. The painter has been too busy working to keep track of his birthday.

Bas, who's made painting his livelihood for 10 years (a figure he does know), recently moved to Detroit from Miami to pursue what he calls a more "hermetic" life, concentrating almost exclusively on his work.

But despite his best intentions for a private life, Bas already has three solo shows this year. A show at the Lehmann Maupin Gallery in New York opened last month, and he has shows lined up in South Korea and Paris.

Bas's paintings pull his range of influences -- everything from 1800s poetry, saints and paranormal television -- into dreamy and dark landscapes peopled by lone male figures. For more about his work, head over to the Art:21 blog, and for images, see below.

While Bas hasn't shown in his newly adopted home yet, on Wednesday evening he will make a rare public appearance to talk about his work at a Detroit Institute of Arts lecture.

"I came to Detroit not wanting to be involved in the art scene," Bas said. "But a DIA lecture -- you can't turn that down."

Ahead of Wednesday's event, HuffPost Detroit caught up with Bas to talk about the Detroit and Miami art scenes, pinball and what it's like to have a studio in a haunted spice factory.

What will you talk about at your lecture?

A lot of my work [is about] having a curiosity about everything, and a lot of that curiosity lends itself to mysteries of unknown and the paranormal world -- the spiritualist movement, ghosts, werewolves, the devil. I'll be talking about the reference points and about the work that ended up being inspired by those subgenres. The whole lecture is a kind of a history of the supernatural.

I started very young. I was born in Miami, but my parents moved upstate to a small town; it was kind of like living in "The X Files." There were constant UFO sightings, Bigfoot, ghosts. My older sister was a witch-in-training, you could say. There was an occult section at the library, and [my sister and brother] would bring home books. I would pore over these books and see human combustion, vampires ... it made me go off on a life-long infatuation with the bizarre. I collect a lot of that stuff, spirit photography, I have a wicker coffin. It's a big part of my day-to-day practice, you could say.

When did you start painting?

My father has recordings of me when I was three or four saying I was going to be a painter. There's nothing I wanted to do other than this. Not to get paranormal, but maybe it was a past life thing.

How is the supernatural involved in your painting?

I think [French artist Marcel] Duchamp put it that painting is a form of automatic writing. You're not super conscious of what you're doing. There's an element of magic to painting.

What are a few of your influences?

The lives of saints -- I did a whole series on the saints. A lot of it stems from literature, classical literature that isn't necessarily about spooks and spirits. Oscar Wilde has always been a champion, Baudelaire. I love finding those little avenues between my different influences, that all have the same path in common -- the path being a general understanding that the world isn't just what's here.

Does popular culture ever come into your work?

I'm definitely more drawn to things in the past. All my favorite painters are mostly dead. Aside from just painting there's a lot of contemporary stuff I pay attention to, but I don't know if it bleeds into the work. I do watch a lot of television -- it's paranormal TV 24/7, those weird shows are so popular right now. Supposedly it happens around war times; when there's a lot of death, people wonder if there is an afterlife.

Why did you move to Detroit?

I love the weirdness of this city. It's kind of strange -- you're basically living on the point of a knife, balancing on it.

[I moved my studio here] when I realized the space you could get here for your money. For one year of rent in Miami I bought my painting studio's building. I've been here full time for almost two years, my studio is here and I want to make work all the time so it makes it hard to get back to Miami. I see maybe five people in Detroit. I go between my house and my studio, it's been like living on two little islands.

My studio is in an old spice factory. The last question I asked the owners is, "Are there any ghosts here?" They said, "Well, every place has a little something." That freaked me out a bit, but I haven't felt anything.

Has living in Detroit for the last two years affected your work?

It's changed in a weird way. When I was living in Miami I would never paint palm trees and tropical locations. Now I'm in Detroit and I just want to paint flamingoes. I think that happens -- if you live in Iceland you dream about the beach, you know?

How are the Detroit and Miami art scenes different?

In some ways the Miami art scene was like what Detroit is like now 10 years ago, and now Miami has become like the spot to be. People started calling Miami the "new Berlin" for art and people now say that about Detroit, but to me that's a negative thing.

What are some of your favorite things to do in Detroit?

I love the Belle Isle conservatory. I really want the aquarium to reopen, I love the idea of a Victorian aquarium still existing. Jumbo's would be my favorite bar. I love Eastern Market in the summer when it's super plant-crazy.

The Michigan pinball expo is this weekend. I'm a bit of a pinball fanatic -- I have four machines. There will be a lot of hardcore pinball nerds there who take it really seriously.

Hernan Bas will hold a lecture at the Detroit Institute of Arts' Marvin and Betty Danto Lecture Hall, 5200 Woodward Avenue, Detroit, at 7 p.m., following a 6 p.m. reception in the museum's Kresge Court. To RSVP and receive free entrance, see the DIA's website.

See images of recent work by Hernan Bas below: 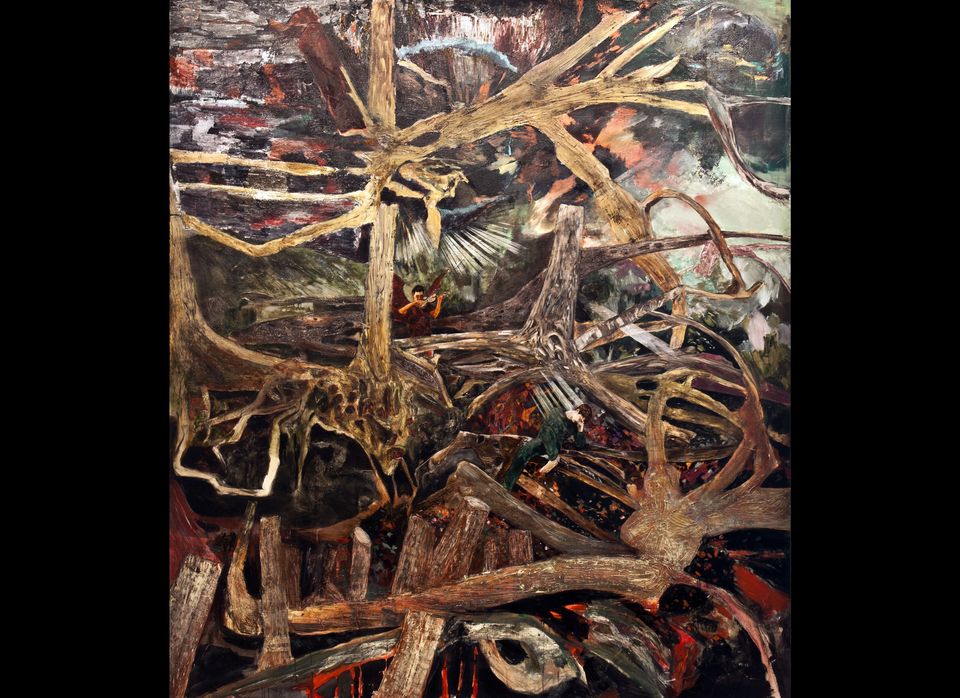