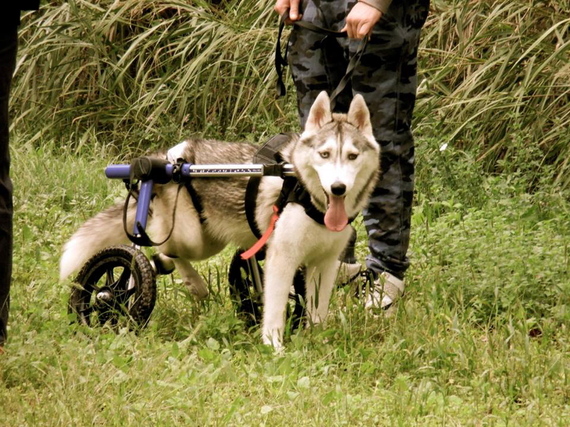 I had read the story online,briefly. Not because it did not interest me, rather, because it hurt, it made me feel uneasy. Something, about that image troubled me. The sight of a paraplegic dog armored into a two wheel cart was disturbing. I assumed Hero, now an 11 month old Siberian Husky, led a terrible and sad life. Why would anyone condemn a living being to that kind of an existence? After all, nearly a year had gone by and no one had stepped forward to adopt him. I was validating my emotions and judgement, denying the possibility for change to happen by not listening. We live in the age of image. Images are the surface of reality. To understand it is necessary to go beyond. So,I did.

According to the Italian animal protection organization LAV, every year an average of 80,000 cats and 50,000 dogs are abandoned. Eighty percent of these have a high chance of dying in accidents, of starvation or because they are mistreated. Abandonment is a crime in Italy. Punishments include up to one year of imprisonment or, a fine of up to 10,000 euros.

With this notion in my head I parked the car, grabbed my camera from the back seat and walked toward the pet shop to meet Chiara, Roberta and Hero. Chiara is a pet trainer, Roberta runs a pet grooming business. Their common love for animals brought them together. As volunteers for OIPA they devote their lives to rescuing and finding loving homes for forsaken dogs and cats.

Chiara was standing outside the front door of the shop, shivering, waiting for me in a frosty mid January wind. " Nice to meet you! " she said as she stepped aside. Through the glass, Hero's eyes smiled at us, one ice blue, the other brown. He sat and stared. " Move over "lupino" ( little wolf ), let us in. It's cold out here." Hero maneuvered himself out of the way, dragging his hind legs. To my surprise he put very little effort into movements." We think he doesn't know the difference. He was very small when the accident happened. Hero was forced to get used to this condition right from the beginning." Chiara giggled. She had read the expression on my face. " When you're always around animals you learn to interpret mannerism more than words! "

Roberta joined us. She had just finished grooming a little dog for a young girl who was waiting to take him home. It was time so say goodbye to another fortunate friend who had been adopted. Tears of joy filled our eyes. The whole time Hero had sat in the middle of the room, his big pink tongue hanging out of his mouth and his favorite tennis ball in front of his feet. " We'll play later lupino!" said Chiara.

Roberta wiped her tears and showed me a picture on her cell phone: "This is Hero when he was a puppy. He's amazing isn't he?" Once again tears began to roll down her cheeks. "When he was that little everyone wanted to adopt him. We were afraid to give him up when he was a puppy. We feared that when people realized how difficult it is to take care of a big paralyzed dog they would abandon him somewhere. They do it with healthy dogs... so, you can imagine..."

Chiara and Roberta have cared for Hero since the day he was taken to the veterinarian in critical condition. The puppy had been attacked by his father. Although it may sound crude, this type of behavior is not uncommon among our canine friends. It's about instinct, relations between animals and human awareness. "There were moments when we thought he wasn't going to make it," says Roberta. "But, every time he looked at me it felt like he was begging us not to give up." After discussing the matter with the pup's original owner and the veterinarian, a decision was made. Together, they would help Hero live, give him the best quality of life possible and the opportunity to find a family who understands his physical and emotional needs. A family capable of seeing all the things he can do, despite the paralysis.

In February Hero is going to be one year old. Against all odds he has survived. He eats, drinks, runs, plays and has plenty of friends. But above all this, Hero gives and receives love.
Some may read this simple story and judge it as rhetorical. "Love," may be an exploited word but it remains the motor of all living beings. Love ignites passion, passion leads to dreams and dreams have the power to change the world. Love is what kept Hero alive and his presence makes us better people.

"I don't know if Hero will ever find a home," says Roberta, "but I do know he has a mission to accomplish, he has a purpose." I have a hunch that we will be hearing a lot about Hero in the near future around here. Maybe we will see or read about him as he travels through schools, surrounded by children who will learn the beauty of diversity through the kindness in his eyes. What a great accomplishment this could be! In the meantime: Happy Birthday Hero!