A dog who put her life on the line in an unsuccessful attempt to save her owner has been welcomed into a new home.

Carmen, a 9-year-old boxer in Ohio, made headlines earlier this month when she was found unconscious during a house fire, according to CBS News. Firefighters told a neighbor that the pup was found lying across her owner's face in what seemed to be an attempt to shield him from the flames, WCPO reported. Rescuers took her owner, Ben Ledford, to a hospital where he was pronounced dead. 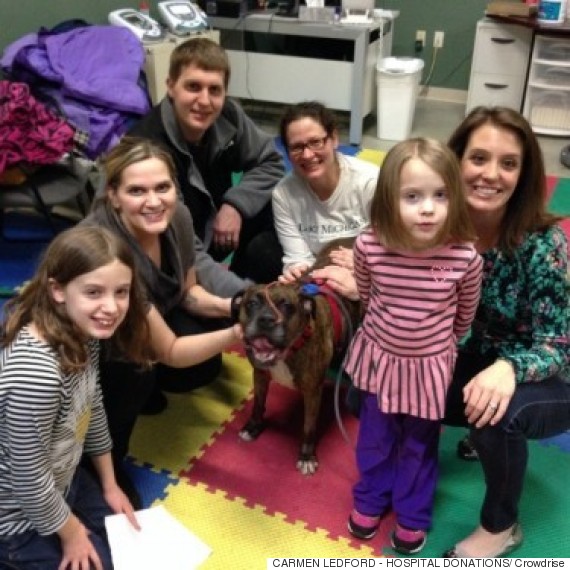 While the dog survived, she was in critical condition and spent almost two weeks in 24-hour care at an animal hospital after the fire, according to a fundraising page set up for the canine. This past Monday, the pooch finally became strong enough to leave the hospital, and head to her new home with Ben's brother, Phil.

"It'll be tough in that sense, seeing Carmen every day, because she will remind me of Ben," Phil told WCPO. "But it'll be like having a piece of him around."

The heavy smoke from the fire left the canine with severe lung damage, and she initially needed to go on a ventilator to breathe. Under the supervision of Care Center veterinarians, as well as help from an online community who has donated almost $30,000 to cover Carmen's medical bills, the pup has made huge strides in her recovery.

It's support that Carmen's new caretakers say they're grateful for during this difficult time.

"We appreciate everything, as you have shared in our grief as we mourn the loss of Ben, our hope for Carmen's recovery and finally our celebration as Carmen heads home," the family wrote on the fundraising page.

Carmen will continue her rehabilitation under Phil's care.

"It's nice to have her here. It helps. It's a nice positive in a bad time," Phil told WKRC.

To learn more about Carmen or donate toward her medical bills, click here.