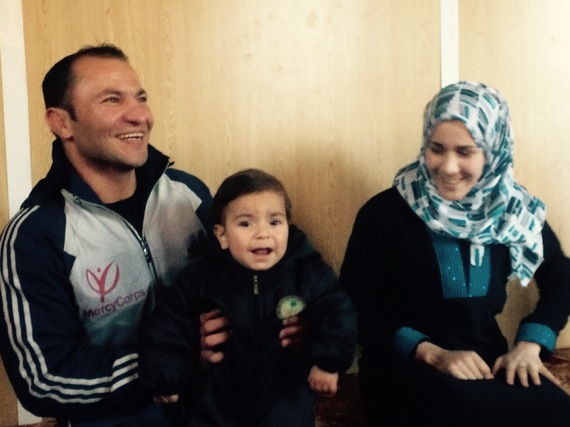 ZAATARI REFUGEE CAMP, Jordan -- A Syrian refugee who lost nearly everything and has lived in this desolate camp for almost three years, Mohammed al Krad offered an unexpected message of resiliency.

"I believe that every person has to have hope; my life actually has so much meaning," said Mohammed.

I got to know Mohammed on a recent visit to this refugee camp and learned that he was a popular figure before the war. He was Syria's national wrestling champion. After a celebrated career as a professional wrestler, he became head coach of the Syrian national team. Now he wrestles with the hard reality of life as a refugee. Recently, he emerged as a mentor and coach for young Syrian men and women struggling against the despair that often permeates refugee camps.

The journey that took him to this refugee camp began in 2012 with a knock on the door by officials from the autocratic regime of President Bashar al-Assad. His title as coach of the national team made him in many people's eyes a loyal member of the regime. Demonstrations had enveloped the streets, and government officials asked for his help in putting them down. His heart stood with the pro-democracy movement, but if he didn't help the regime he would be imprisoned. He had to make a decision.

Mohammed and his wife Asma left that night for Jordan, taking almost nothing in their haste. His brothers and other relatives joined them. His uncle knew a secure route. Their paid guides spirited them from place to place each night, bypassing checkpoints and hiding them during the day. They were dropped off 15 miles from the border and then walked through the night to arrive at the crossing into Jordan with hundreds of other refugees fleeing the war. The Jordanian military patrolled the border and picked up masses of refugees each night, loaded them into trucks, and took them to a large processing center where they were fed, given medical care, and interviewed. Those suspected of being militants were sent back across the border. The rest were transported to the rapidly built Zaatari refugee camp.

Within months of their arrival in 2012, Zaatari's population had ballooned to 100,000 Syrian refugees; it's now the fourth largest city in Jordan, and one of the largest refugee camps in the world. It's well organized but desolate -- a flat expanse of desert, barren of vegetation or shade. At first, the camp was row upon row of tents. Now, many of the tents have been replaced with metal "caravans."

The Syrian war grinds on with no clear end in sight. Mohammed told me, "I thought the family would return to Syria in three to four months after the situation there had calmed down, but now we're trapped." His family had an offer to resettle in Qatar. But they left Syria without their passports, so they cannot leave.

Half of the entire Syrian population is now displaced, according to the UN, including 7 million within the country and 4 million now refugees in Turkey, Jordan, Lebanon, and Egypt. More than half the population is under 25 and many children and youth have missed a year or more of school. There is growing concern for adolescents who are largely idle and suffer the effects of trauma and dislocation. Aggression and fighting have increased in the camp, particularly among adolescent boys.

Two years ago, a sports program for youth was started inside the camp. Word quickly spread and Mohammed offered to help. It became clear Mohammed had leadership skills, and he was hired to build the program.

Within a few months, 400 youth between the ages of 12 and 17 were participating in the program. The international NGO Mercy Corps brought in exercise and weight-lifting equipment and converted a warehouse into a gym. Mohammed organized wrestling and boxing programs for boys and aerobics for girls. Soon he was known throughout the camp simply as "Coach."

His expectations are high. If you enroll in the program, you are expected to come each day. He instills discipline and pride. At first boys would arrive in packs, and fights quickly broke out. When they wrestled, punches were thrown and equipment was broken. Boys tried to pick fights with Coach. I asked him if he ever had to kick any of the kids out of the program.

Never. If I kick them out, they will only become more aggressive. My job as a coach is to absorb their negative energy and change it to positive energy. I quickly saw that there were two kinds of aggression and I had a different approach for each. One type of aggression comes from fear. These kids have been through a lot of trauma and are afraid. They feel insecure. They are still kids yet they have faced so much and have lost all hope. I give them a sense that this sports area is a safe space. They know that I am here for them and that I'm working on their behalf. I find that when they get physically exhausted from a disciplined workout, then they calm down. I also work on giving them pride in what they are accomplishing.

"The other type of aggression I see is a bid for attention -- to gain a reputation as a tough guy. These boys purposely try to draw attention to themselves by roughing kids up, by shouting or breaking equipment. They want to gain fame in the camp. I try to flip this drive to show them that they can be famous by being good at what they do, to seek fame in a positive way. I tell them, 'Don't make noise to make people notice you. Work hard and the noise and fame will come to you.'

Mohammed built the large sports area with the hope that it will become a sanctuary for these kids, saying, "When they are here, they are isolated from the outside problems. Here they are safe and they have purpose."

"I am a refugee too. I have also been through this trauma. I relate to how they feel. I believe that each person needs to have hope. So if I've been able to inspire these kids and create dreams for them, I've reached my purpose and I have hope and pride as well," Mohammed said.

Recently Mohammed put on a sports tournament in wrestling and boxing that included hundreds of youth and spectators. "I cried when I crowned the champions. I remembered when I was crowned in Syria. That was a different life that is now gone." 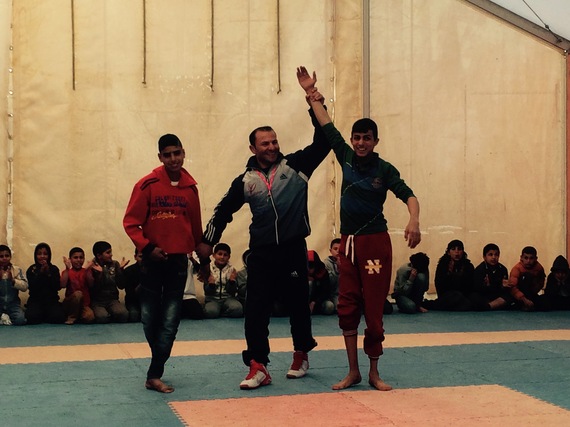 Mohammed raises a winner's hand at a wrestling tournament at the camp.

Mohammed and Asma had a baby boy recently named Taemal-Malik. There are now an estimated 1 million Syrian refugees in Jordan. After nearly four years of war, there is no clear resolution. Much of Syria's economy and infrastructure has been decimated. International attention and funding have turned away from this crisis to focus on new crises, particularly the threat of ISIS. There is less and less aid going to the refugees. They now represent 15 percent of the population in Jordan and are straining a country that has a history of taking in refugees that dates back to when hundreds of thousands of Palestinian refugees fled to Jordan after the wars in Israel of 1948 and 1967.

Zaatari camp already feels like a Syrian city. There's a large marketplace in the center of the camp. On the main street, called the "Champs Elysees", one can find anything that could be found in a mid-sized city: small grocery markets, cafes and small restaurants, bridal shops, home goods shops, electronics stores, video game kiosks, ice cream parlors and much more -- each located in small metal kiosks or caravans. I even wandered into a shop that was selling colorful parakeets in cages.

Weddings are taking place within the camp. Traditional ceremonies have sprung up. But it remains a desolate place and refugees are not free to leave. The last day I was in the camp, there was a cold rain and temperatures were in the forties. Tents and caravans are not insulated. The ground was mud and most children were wearing only plastic sandals. It seemed like there was no place to go that was warm and dry.

I asked Mohammed what being a coach means for him and for the young refugees with whom he works. He responded, "In some ways I have more purpose in my life than I did before. I am aware of how important I am to these kids and what a difference I am making in their lives. They will be my future. When we go back to Syria one day, they will be my team. They will be a star team. This is our hope." 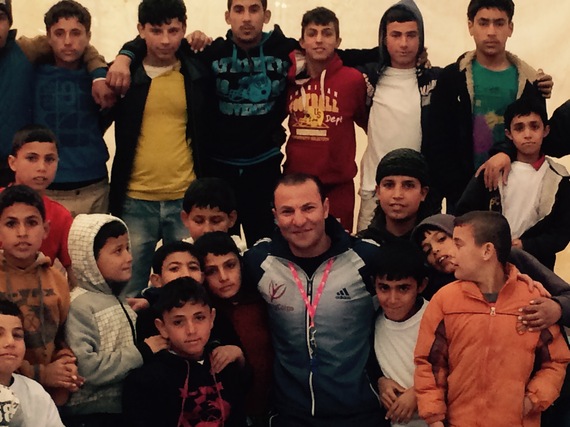 Mohammed and the boys.

Linda Mason, Leader in Residence at Harvard Kennedy School and chair of Mercy Corps Leadership Council, occasionally writes opinion pieces for VOICES, a series produced by The GroundTruth Project and supported by The Ford Foundation.