Nine years ago combat Marines from Camp Pendleton became the first conventional U.S. troops sent into Afghanistan. They were also part of the first unit to cross the Iraqi-Kuwaiti border in 2003. Among those marines was Staff Sergeant Tim Gallagher. And now, as he prepared for his second deployment to Afghanistan, I spent some time with him, his three children and his wife as part of a report for the PBS program SoCal Connected. And here is what I learned: when a marine goes to war his whole family goes with him. Did you ever see the bumper sticker that says "The hardest job in the marines is being a marine wife?" Well, that's never been truer than now.

You can see for yourself in the piece below.

As part of my research I spoke to Nancy Sherman, author of an intriguing analysis of the mentality of the warrior in combat and at home called THE UNTOLD WAR: INSIDE THE HEARTS, MINDS, and SOULS OF OUR SOLDIERS (WW Norton). Trained as a philosopher and a psychoanalyst, she makes the case that wars are fought on two fronts, one with guns and the other within the psyche. I wanted to mine her understanding of soldiers' hearts and minds and find what she learned about the families they leave behind physically, but not emotionally.

CHRISTAL: Let's start by talking about the reality of multiple deployments, since this is really sort of a recent phenomenon.

NANCY SHERMAN: We're fighting now almost 10 years, it's longer than WWII, but with a really stripped down military and very few are doing it. So some are on 4th or 5th deployment.

NS: That's a long time to be at war, a long time to be revved up and you're there, there's no time that you are not there. If you're in Iraq or Afghanistan, these are counter-insurgency operations, there are no front lines, and you're always on alert for an IED or for an insurgent. When you're always vulnerable and always at risk, you have this ramped up hyper vigilant sensibility on overload and it's very hard to let go of it when you come home especially if you know you're going to go back. When [they] come home they want so desperately to let go of the numbness. They want to be able to talk and laugh and communicate.

CS: And for families at home multiple deployments also present unique issues. I'm thinking of this one family in particular that I've been spending so much time with, he's been out training in the field, so he's been gone for 5 weeks, then he's home for 10 days and then he's off to Afghanistan. His wife told me she was exhausted by the coming and going and she has gotten to the point where she felt like saying, "just go already, please just leave," because it's just so hard. There's something about that back and forth that's particularly difficult.

NS: I think that's right. Even from both sides - the soldier really wants down time in those ten days but it's so hard to reconnect in that time. It also depends upon how much baggage you're carrying and there's so much anticipation and then limited patience on the part of those at home and also, in the case of the wife or mom, she's figured out how to do it all on her own, how to pay her bills, how to get the kids to school, whatever it is. And then the disruption is enormous. You don't have someone who can connect, who's emotionally there and for a military man or woman, they've come home and again they don't want to be numb or they don't want to be all revved up but they are and there's not much down time. There isn't time to work through issues and also, they're getting ready to ramp up again. It's extremely hard. I don't know what the solution is. Men and women keep their civilian sensibility, in some sense it's the only way they can remain human, but they come home and they can't make those transitions easily, it is not seamless. I really do believe that we have to understand that as public because we have to allow soldiers to open up to talk about it a bit.

CS: You talk about that line between soldier and civilian and how now, with global communications, you never really shed your civilian self even when you are deployed. You explain why that can be stabilizing but also disorientating and I want to hear more about that.

NS: The war theater and home theater are not separate the way they used to be and the safety that came with being able to put up really strong walls is no longer. That kind of separation and almost insulation isn't possible anymore with email, instant messaging, and cell phones, and it means that the families go to war with the troops and the troops also worry about Suzy's birthday party that didn't go well or the ups and downs of family life.

CS: The impact this all has on the home front is what fascinates me. We held a round table for a group of marine wives and they all talked about how their husbands had road rage and drove recklessly once they came back from deployment. You say this is very common and that it has to do with missing that adrenaline rush you get on the frontlines?

NS: That's an extremely important issue. Psychiatrists on the bases worry desperately about road rage. It's well known -- people come home and they put that pedal to the floor. One of the families that I spoke to, the kids were scared silly of being driven to school by their dad, because it's 7 am, it's a suburban street and [he was] driving as if in war zone. I've also been in the car on a trip to Fort Bragg with a guy who just came home and he wasn't going fast. He would slow down when he saw a little bit of rubbish on the road or an irregular surface and he would excuse himself, but explained that 'I'm bringing home some of Iraq looking for IEDs." ... Then there are the classic brawls and fights. I talked to one guy, Rob Kislow, who had been at Walter Reed for 2 years, and went home to start his life as mechanic. He found himself in a bar with his hands grabbed around someone's neck, bringing him down to the floor and tears streaming down his own face and he had a flashback of being a sniper again and defending himself for his dear life. That wasn't the ramped up road rage but a flashback that made his life back home so precarious.

CS: Another thing you briefly touch upon -- the intimacy issues. I recently read a blog by a military wife and she talked all about her sleeping patterns and how much of the bed she took up when he was home, and when he wasn't, and readjusting to having another person physically in the bed.

NS: 'I shall never leave a fallen soldier on the field' -- the Marine's credo. That's very ancient [and it creates] new intimacy bonds and I would suspect that when they come home from long deployment, they only have 3 months or so before they go back, that's not a lot of time to work out their issues, not a lot of time to rebuild intimacy or a lot of time to replace intimacy they felt. They feel really conflicted and a lot of them say they get used to living without their partners. In the case of the wife, she may move in the bed and the soldier next to her thinks that's a restless enemy so he's in hyper vigilant mode which is a hangover or symptom of PTSD.

CS: Would you have any advice for family members who are seeing somebody off in terms of what they can do to make it an easier transition for their soldier?

NS: One is, like any close knit family, you want your family member to keep the lines of communication open no matter how ugly it gets. I feel that so strongly with my children, and if I were seeing one off to war, I would fight desperately to want to be able to have them tell me everything no matter how ugly or sobering or how much they want to protect me from it. I feel this really strongly because of my dad; he died just before I put the finishing touches on my book this past December, and I found his dog tags in his pocket and I had no idea he had been carrying them for 65 years. My dad never discharged a firearm; he was a medic and he talked to me in his later years as I started to research this book but I still had no idea. He felt he had to carry the moral bruises of war so privately for so many years. My mother didn't know that he carried them in his pocket either. So there is that sense that 'I can't burden you with it, it's so ugly, and a war is so awful that only I can make sense of it, you can't.' I would urge families to try not to have those kinds of walls. I think the public really can get it if we are empathic listeners and if soldiers know that we are ready to hear [them]. 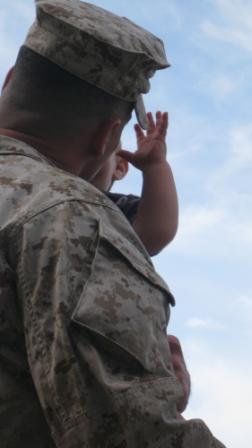