Collin Zborowski, 28, and Daniel Lubach, 27, were arrested last Tuesday after police saw them together inside a stall in the men’s bathroom at the Chuck E. Cheese restaurant. A customer reported to police that the suspects were getting high in the family-friendly pizzeria's restroom, according to the Los Angeles Times. 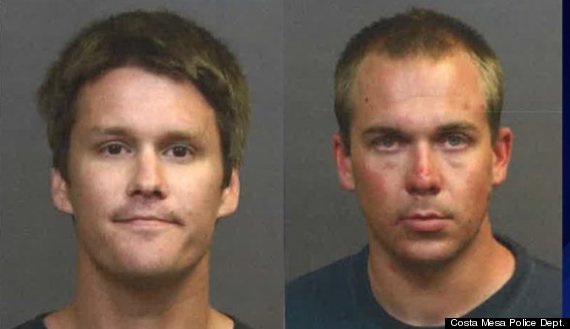 The men went to Chuck E. Cheese's to meet with a drug supplier, Costa Mesa Police Sgt. Patrick Wessel told NBC Los Angeles. Police did not know whether the suspects had tried to sell drugs to other people at the pizza restaurant and children's playground.

Both Zborowski and Lubach were under the influence, according to the arresting officers, who confiscated drug paraphernalia and a small amount of heroin, KTLA TV reports.

He was released after posting $20,000 bail on Thursday.

Lubach, was booked for the misdemeanor charge of under influence of controlled substance, was released on a written promise to appear in court.

"We cannot begin to express the combination of sorrow and anger that we feel about adults engaging in this type of behavior in a children's establishment," she said in a statement released to KABC TV.