I try not to enter Brendan's bedroom. It has been four months and it still smells of death. Today, as I open the door nausea overtakes me. I placed a small rug down to cover the vomit stain, but the edges of Brendan's body fluids still peek out, taunting me, daring me to break down and never recover.

His hockey equipment is lying on the carpet with the bag open so that his sweaty items don't grow mold. His empty soda cans and old gum wrappers are still on his nightstand where he left them.

All of the items from his brand new custom ordered 2015 orange RAV4 are stacked on his bed: a box of chocolates, his school work, a Columbine keychain, his NA tags that mark his sobriety, and all of the garbage I could not bear to throw away.

Heroin addiction has ruined our family. The day my 15-year-old son, Brendan, took his first hit, he changed my life. Yes, not just his, but mine too. And not just mine, everyone who loved him.

My daughter, Haley, found him unresponsive. She is 12 and has never gone back downstairs to her bedroom. She probably never will. She sleeps on the floor next to me. Most nights she wakes me, her long blonde hair drenched with sweat from nightmares.

My husband, Scott, is a retired police officer. He's seen grief before; I can't hide it from him. Nowadays, he spends most of his time guiding me through this emotional minefield littered with sixteen years of breathtaking memories.

We are all on a merry-go-round we can never escape. So we stay on this ride. Dizzy, sick, tired, and scared. No peace. No quiet. Only the merry-go-round with these silly stuffed animals on Brendan's bed, staring at you with blame and shame and sadness. You vomit, you cry, and yet you ride round and round.

Folded on his bed are several dirty shirts that still smell like Brendan. And right there, pinned to his wall, screaming out to me, is his retired Columbine jersey -- number 19 -- signed by all of his teammates and presented to me at his funeral. The blue is too bright from never having been worn or washed. 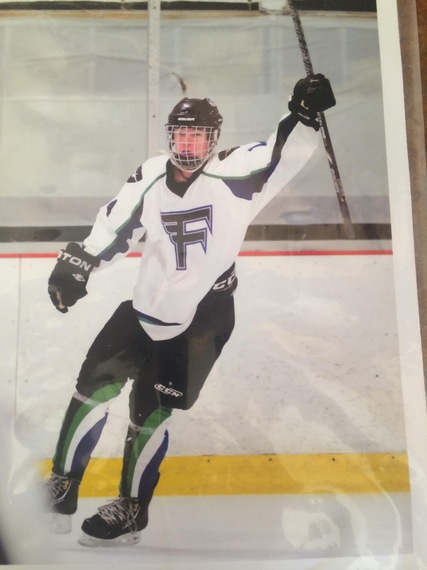 Suddenly, I see images on the floor, pictures in fast forward, a movie that storms across my brain without notice... Brendan dying.

I jump on top of Brendan and straddle him on his bed. His eyes are tiny slits. I can see some white, but I'm afraid to pull back his eyelids. He is barely breathing. Like an animal, I scream to Scott. What is happening? Why won't he wake up?

Scott pushes me off and drags Brendan to the floor and begins CPR. I watch as Scott chokes on black liquid coming from Brendan's mouth. I don't understand what is happening. A rancid smell of vomit begins to suffocate me. Black blood and a vile bodily fluid begin to cover the carpet around Brendan's head.

I have to get out of his room before it swallows me. But I feel like I'm knee-deep in molasses and I can hear Brendan whispering. My mind skips like a flat rock on a serene lake's surface. Then I realize my fate... to relive this horror over and over, forever.

The living room is filled with firemen, police officers, and EMTs. Where did they come from? When are we leaving? Why isn't Brendan in the ambulance yet? Someone is talking about where to land the chopper. Just get my boy to the hospital! There is an awkward cocoon of silent madness enveloping me. A vacuum of untouched insanity. A prelude to perfectly woven horror, and all of a sudden Scott walks in and pops that bubble.

He is walking in slow motion, staring at me. His voice cracks... a sentence, just five words: "Brendan did not make it." His arms reach out to catch me as I fall to the kitchen floor. No, oh God, NO! Not my baby. Not my boy. He kneels down and holds me. I can't breathe. There is no air. I am suffocating. Scott cradles me, softly crying and saying, "I know, I know." But no one can know. I carried Brendan inside of me; he can't be gone. He just can't. Oh God, no. I begin to gag. My stomach wretches. I begin to quiver uncontrollably. Heroin just killed my baby.

On the shelf next to Brendan's bed, I have a beautiful urn with an angel crying. It holds his ashes. Maybe if I leave him there he will come back to life and be with me again. Maybe things will be different this time. Maybe we will laugh together again. Maybe if I don't touch Brendan's ashes, his death won't be real.

Trisha Grose is committed to helping others avoid the ultimate cost of the heroin epidemic. She is currently writing a book, Beauty From His Ashes, with Richard Farrell, so that the death of her son, Brendan, can help others.