It would be comforting to feel detached from the heroin epidemic. As parents we want to define our neighborhood as sequestered and our children immune to the possibility of using, thereby obscuring our engagement with hard core drugs. "Not my community" is an illusion, "Not my kid" is hopeful but naive. In 2013 we lived in an uber-safe, master-planned community in Southern California and I was a mother who had little suspicion. My 18 year old seemed like he had everything going for him. He had never been in trouble at home or school. He'd graduated from high school and was working a good job at the time I was told he was using heroin.

In retrospect it was a lack of awareness that made our household an ideal host for heroin use. According to a study by Cornell University, adults make an average of 70 decisions everyday, 12 of them before 9:00 a.m. Juggling multiple responsibilities and conflicting demands means that a percentage of these choices are made subconsciously. Life and work kept me busy but I didn't feel oblivious. I was reasonably unthreatened by innocuous household items and ordinary behavior. I can now see individual signs that once seemed benign, together created an obvious picture of drug abuse and foreshadowed the hell that was to come. 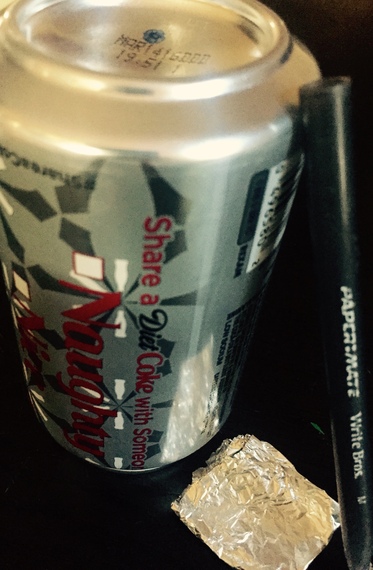 Innocent pens, ordinary aluminum foil rolls and empty soda cans, as well as typical prescription bottles and receipts were the harbingers of heroin use. Finding random foil squares around the house barely registered on my radar. I had no context for the black stripes that were revealed when I unfolded the foil. I assumed the graveyard of melted, dismantled pens were the result of adolescent pyromania and I made a mental note to tell my son to knock it off. By the time I learned about "chasing the dragon," heating heroin atop foil and inhaling the vapor with pen barrels (glass pipes and straws), it was irrelevant; the chase was ongoing. I mistook soda cans, in sawed off form, as an indication of time spent goofing around with his buddies. Instead, these cans were the bell weather of danger. It wasn't about the sharp edges, but the indication that heroin was being injected. Turned upside down the bottom of a can becomes a shallow vessel, a makeshift spoon, used to liquefy heroin and syphon it into a syringe.

Household medicine cabinets crowded with pain medications provide an opportunity for curious adolescents to be introduced to opiates. If medications are used sporadically it's unlikely you, your friends or family members would miss them if they disappeared altogether. I never found any telltale amber colored pill bottles or discarded caps, but I did come across single pills in my son's jeans pocket, which sent me Googling to determine the medication.

While searching for a rehab facility, my knee-jerk reaction was to throw away all the pens, and to keep the foil rolls along with all our household medications in the trunk of my car. It felt stupid but simultaneously constructive. Ironically, what I hoped would be a deterrent for his use only became an inconvenience for me.

Loose receipts weren't generally noteworthy, except when I came across the rare handwritten one. I was perplexed by a document indicating flipping a $100 Sports Authority gift card for $62.00 cash. His claim that "I have all the sports equipment I need, mom," seemed truthful; so I commented on the stupidity of his financial loss. I understand now that selling the gift cards for less than their face value provides quick cash and accessibility to drugs.

On their own, my son's physical symptoms seemed unexceptional and at the time aroused little concern. But later, in concert with the flu symptoms, dark circles, sweaty skin, sleepiness and weight loss together represented heroin use.

While I was on the way home from a mom's weekend my son called to say he was sick and had thrown up. He was worried about missing a shift at the 5-star hotel where he worked and needed advice. When I calmly guided him on how to professionally handle the situation his reaction was irrational. His demeanor was so out of character it should have been a tip off, but I chalked it up as his serious work ethic instead of a symptom of using heroin.

When his eyes became shadowed by dark circles I assumed he wasn't getting enough sleep. Studying him from a distance a few months later I asked him why his blue eyes looked so dark. He shrugged it off, "It's just the light, mom". Once he was homeless his face became dominated by shadows and his eyes resembled antique baby dolls. He was alive but his eyes were empty. Heavy lids and tiny pinpoint pupils became a haunting image that I cannot erase.

His oversized clothing made it difficult for me to track his weight loss. My comments about his slimmer stature were met with his claim of fitness running, which also explained his sweaty skin. Although his body was a trash can for drugs, he was consciously health savvy, and commenting on GMOs and eating organic eggs reassured me he was healthy. Months passed, and at his worst he was 40 pounds lighter; his clothes hung from his shoulders. He resembled a skeletal, glowing version of himself.

Teenagers infamously maintain unique sleep patterns. It took some time to sort out the differences between normal sleepiness and nodding off. I began to recognize that difference was that he was actually unconscious. The nodding out was usually precipitated by slurred speech. In the early days I would wistfully assume he was drunk. Slurring was quickly followed by an all system shut down. In the midst of functioning a user will simply stop like a toy out of batteries. An arm poised mid-bite with a fork dangling from their mouth would be an example. I still scrutinize my son when he sleeps.

Although addicts are astute at concealing their drug use and lightning-fast with explanations, with their faculties compromised they leave a trail of clues. I resent that I was oblivious to the signs because those clues had no context in my life. Embrace my experience, increase your awareness and avoid subconscious decisions that you will later regret. Find a more detailed listing and depiction of heroin abuse here.

More:
Parenting heroinParentsadolescentsaddiction
Newsletter Sign Up
Raise the kind of person you'd like to know
Subscribe to our parenting newsletter.
Successfully Subscribed!
Realness delivered to your inbox