What can cold sores tell us about the "out of Africa" theory of human migration? More than you might imagine.

While the theory that early humans migrated from Africa to other continents is widely accepted among scientists, the evidence to support it has been limited. So a team of researchers from the University of Wisconsin sought to confirm it by looking at the spread of a particular strain of the herpes virus along the presumed migration routes. The scientists hoped that by studying herpes simplex virus 1 (HSV-1) -- the common strain that causes cold sores -- they could draw key conclusions about how, specifically, human populations dispersed.

The theory holds that humans originated in Africa 150,000 to 200,000 years ago before slowly dispersing to Australia and the Middle East and, eventually, around the globe.

"What we found follows exactly what the anthropologists have told us, and the molecular geneticists, who have analyzed the human genome have told us, about where humans originated and how they spread across the planet," Dr. Curtis Brandt, a professor of medical microbiology and ophthalmology at the university and senior author of the new study, said in a written statement.

For their study, Brandt and his team compared 31 genomic sequences of HSV-1. The researchers focused on mutation patterns within the genome sequences -- derived from data collected in North America, Europe, Africa and Asia -- in order to isolate specific clades, or branches, of ancestors and their descendants. 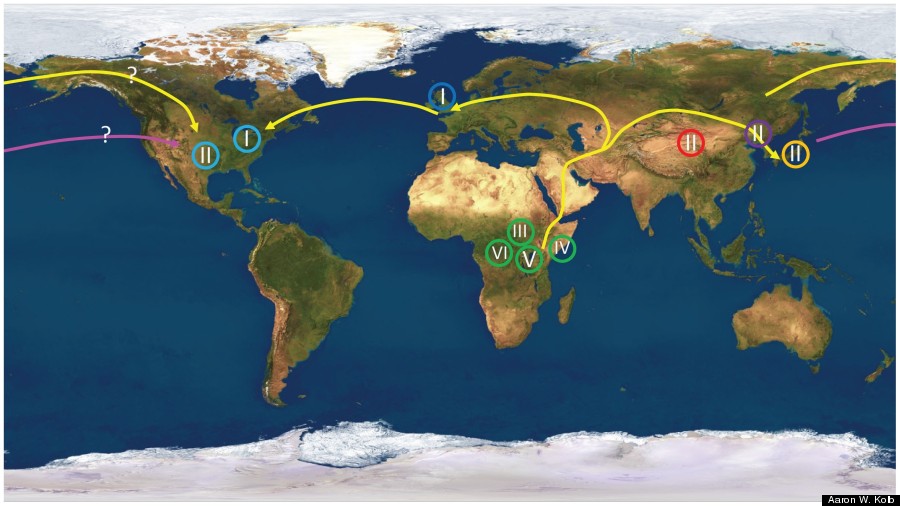 The phylogenetic data support the “out of Africa model” of human migration with HSV-1 traveling and diversifying with its human host. Each clade is depicted by a roman numeral inside a circle. Land migration is depicted by yellow lines and air/sea migration is shown by the pink line. (Image courtesy of Aaron W. Kolb, Cécile Ané, Curtis R. Brandt/PLOS One)

In the HSV-1 research, Brandt and the team noticed that similar strains of the herpes virus are clustered in distinct geographical regions. For example, strains in Africa are clustered together, while viruses derived from far east Asia, including China, Korea and Japan, share certain commonalities.

Aside from confirming what was already known, the study shed new light on specific aspects of human migration. Though viruses in Europe and America were clustered together, there was one exception: a North American strain in Texas that shares similarities with strains derived from east Asia.

While the exception could just be chalked up to recent travel between the state and Asia, researchers speculate it also supports the hypothesis that native Americans once crossed a "land bridge" to North America.

"We found support for the land bridge hypothesis because the date of divergence from its most recent Asian ancestor was about 15,000 years ago," Brandt said in the statement. "The dates match, so we postulate that this was an Amerindian virus."

The findings also support conclusions reached by scientists who have used DNA samples to provide evidence for the human migration patterns under the "out of Africa" theory.