PHILADELPHIA — When is a rectangle a case of intellectual property? The Hershey Co. says it's when the rectangle is divided into a dozen smaller rectangles and mimics the design of its signature chocolate bar.

The Pennsylvania-based company is suing Williams-Sonoma Inc. over the shape of a brownie pan the chocolate maker says "embodies and mimics" its candy bar design. Hershey is seeking an injunction to block the upscale retailer from further sales of the baking pan.

Williams-Sonoma spokeswoman Leigh Oshirak says the company has no immediate comment on the dispute.

Hershey's suit says its chocolate bar is more than a century old, and has enjoyed trademark protection since 1968. The suit is filed in federal court in Harrisburg. 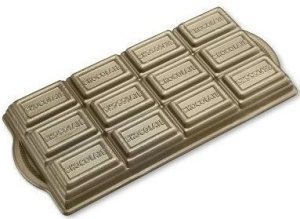 The pan in question at williams-sonoma.com