October 22 was National Pantsuit Day. Yeah, I missed it too. The funny thing is, I was literally #withHER at an event that day and surprisingly, Hillary made no mention of the occasion. 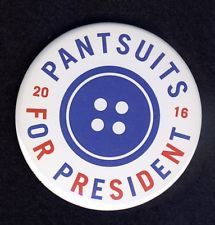 While all the talk of pantsuits may seem silly, just the other day I heard a story about a high school-aged girl who doesn't want a president who wears pantsuits. Yet another sign of the lack of HERstorical knowledge many young people have about the struggle for women's equality.

To understand Hillary is to understand the modern-day pantsuit. It's practical, pragmatic, focused, fashionable and efficient. A woman in a pantsuit signals, "I mean business." We need to embrace the symbolism of a pantsuit as a way to give women a leg up!

There's nothing new about pantsuits on the Beltway. Senator Barbara Mikulski helped lead the pantsuit rebellion in 1993 at a time when women were required to wear dresses on the Senate floor. Women of a certain age, myself included, have faced similar battles.

There are many historical reasons why pants became part of more masculine dressing. European and Asian men initially dressed in gowns, robes, tunics and togas. They began wearing trousers around 3,000 years ago to make it easier for riding horses. Horses were critical to civilization as part of warfare, hunting and commerce in general. Even if women had been permitted to participate in these activities they would have had a difficult time doing so since their mobility was limited by cumbersome skirts with multi-layers of crinoline and petticoats. Pantsuits were first introduced in the 1920s, but began to trend in the fashion world in the 1960s and '70s with the feminist revolution.

Personally, while I'm a major advocate for women in pants and for Hillary, I've never been a fan of pantsuits. Where's the creativity when there's nothing to mix and match? But my real problem with pantsuits is more deep-seated and involves an incident that happened to my grandmother when I was a child. In 1973, she was going on a chartered tour to Israel and my mother convinced her that wearing pants would be more comfortable while sitting on a bus for hours and exploring ancient ruins. At 70 years old, my grandmother had never worn pants and therefore needed a lot of convincing. She finally agreed and purchased a navy blue pantsuit. On the group's last day in Israel, they boarded the bus for Mea Shearim, the ultra-Orthodox section of Jerusalem. After stepping off the bus, the women and children began throwing small rocks at my grandmother and calling out that she was a "sinner." The culprit? Her pantsuit. Ironically, my grandmother herself had grown up Orthodox. That's why she had never worn pants in the first place!

To paraphrase the section of Deuteronomy in the Bible pertaining to this, it says a woman shouldn't dress in man's clothing. It doesn't actually describe what that clothing is and as noted earlier, men were wearing clothes more akin to dresses at that time. The message, though, is clear: women aren't supposed to be like men. And that's the crux of why both Hillary and pantsuits are continually maligned. It's interesting that when men wear suits, they're simply called suits, but when women wear them, they're referred to as (pant)suits. Could this be a result of a society that's still hung up on women wearing pants?

Hillary Clinton made a major statement when she was the first, First Lady to wear pants in her official White House portrait. What a statement it will be when she takes the oath of office at HER inauguration rocking a pantsuit!