Today is the first day of second grade for my seven-year-old, and like many parents, I'm torn between breaking into wild song and dance (like the mom in the Staples ad) or following my son into school to make sure he finds his classroom. Maybe, I think in a bizarre, surely heat-induced reverie, I could sit down in a small desk beside him for the first hour or so.

Just to make sure he's comfortable.

But I stop myself from doing either thing. Because really, even I can see how a lunatic mom dancing in the school yard or one who follows him into class could be, well, embarrassing for a second-grader. Instead I talk with a few parents, exchange stories about the summer, and commiserate over how everyone is growing up so fast.

We parents are an intrepid, hardy, inventive, slightly exhausted bunch. We've soldiered through a hot summer that required answering hundreds of questions, tendering Band-Aids and hugs when needed, and in my family's case, laughing at knock-knock jokes so terrible they were almost funny.

So, today might feel ever so slightly like a holiday. For a brief six hours, someone else is in charge of our children, instilling knowledge that would most likely be met with an eye roll at home.

We can be thankful for the gift of the proverbial village that it takes to raise a child.

But running right alongside the crazy blend of excitement, gratitude, even relief, that comes with the first day of school is a certain melancholy mixed with a wee bit of anxiety. Have we done enough over the summer vacation?

It might seem ridiculous to ask ourselves this question since any of us can tick off a long list of tasks accomplished. But has it been the quality kind of stuff that counts, the kind that prepares our kids for a successful school year?

At the beginning of summer, my son's school sent home a sheet with bicycle helmets to color in for each book read over July and August. The students who read the most books can enter a raffle to win a free bike. For each book, Nicholas carefully colored in a helmet.

This was important stuff, I told him. The allure of a new bike was the perfect incentive to keep him, a normally reluctant reader, reading. And with each tiny helmet, I'll admit I gave myself a little pat on the back. I was being a good mom, the kind who makes sure her child keeps reading!

But did we color in all those helmets? Nope, not by a long shot. What's more, we forgot to bring in the sheet today with the trunk of school supplies. Oh, and math? I realized yesterday that I'd pretty much forgotten about numbers over the summer. A quick review of math facts revealed Nicholas had, too.

So, last night I tossed and turned. Was my second-grader really ready for second grade? In today's world, where every activity seems not worth doing unless it has an educational component, I fretted that perhaps I'd fallen short. We hadn't practiced school work for an hour every day like another parent I know. I mentioned my concerns to my husband.

"Do you think we've done enough to get him ready for school?" MCAS were only a year away, after all.

My patient husband raised an eyebrow, shooting me the look he typically reserves for when I'm about to go off the deep end.

"What about the bicycle helmets?" he pointed out. "And all the other stuff we did together this summer?"

I had to stop and think for a minute about "the other stuff." We'd taken a family vacation to the Cape, spent heaps of time with Nicholas's cousins at his grandparents' house on a pond. We'd had sleepovers and playdates at the beach, where the kids dipped into tide pools and dug holes deeper than themselves.

We traveled to Legoland Discovery and to the local fairgrounds, where Nicholas went on his first "big kid" ride, the cars whizzing by at lighting speed, a huge grin pasted on his face. There were multiple ice cream trips and made-up plays, all acted out in the summer heat; mini-golf outings and hoop games in the driveway. There was the first, heart-stopping time that Nicholas rode his bike all by himself.

Plenty of milestones, plenty of great memories. My husband was right, of course. So much had happened this summer in the blink of an eye. I just hadn't really thought of it that way.

It occurred to me that if we'd had a sheet of helmets to color in for all the fun stuff we'd done, for the kind of growing and learning that's harder to quantify, we would have filled up those helmets in a heartbeat. And isn't there something to be said for good ol' fashioned fun? The kind that makes your kid giggle himself silly? I'd like to think so.

I hope my son's re-entry into school will go smoothly. But if it doesn't, we'll be there to help him every step of the way. Even if, for the first time ever, he didn't want to hold my hand as we walked up to meet his friends this morning.

And I won't. Well, maybe just a tiny bit. But then I'll go color in that mythical helmet. You know the one: "Walks into school by himself on the first day of second grade." 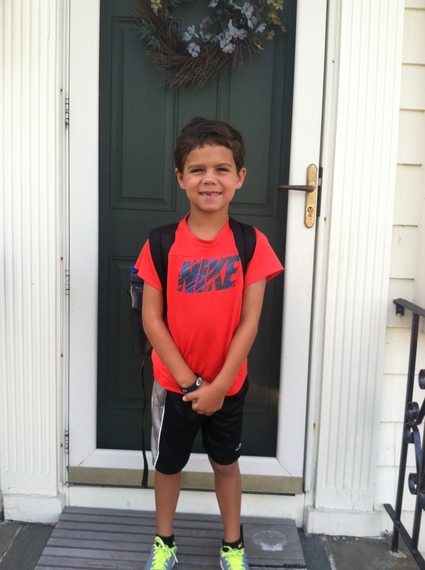