The older I get the more the conversations I have with friends over dinner revolve around how much they hate their jobs. My childhood pal said to me recently, "With each passing day I relate more and more to the Peter Gibbons character in Office Space. Is there anyone out there, except for Oprah or Jimmy Fallon, who has actually found a job that they like?"

Full disclosure here, I was a history major in college, and most of my fellow history majors, save for two have not gone on to work in jobs where the study of history is anything more than a blip on the radar and thus they drown their sorrows in PBS documentaries and whatever historically-minded reality show the History Channel is running. But for some history buffs there is light at the end of the undergrad tunnel.

So just to be clear this article is not designed to tell you how to find your dream job in five simple steps. I offer no simple self-help explanations to anything here. What I do have to offer is a profile of a man I know who actually does love his job and hopefully his story might serve as a little bit of factual information and inspiration in your day. His name is David Turk and he is the official historian of the United States Marshals Service. 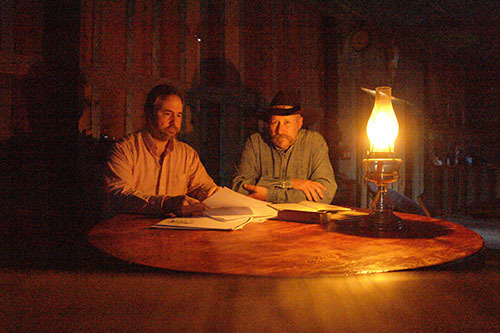 This is David with his buddy, Detective Steve Sederwall, hot on the trail of some lead in a century-old cold case no doubt...

I am sure that just learning that is an actual job got many a history buff out there terribly excited. But wait, there's more...

The US Marshals Service (USMS) is the oldest American federal law enforcement agency in the country and was created over two centuries ago by the Judiciary Act of 1789. The Marshals Service, apart from having cool badges, is an arm of the executive branch of government, and exists to enforce the rulings of the U.S. federal courts. Beyond that the Marshals Service is the primary agency for fugitive operations, making it responsible for federal prisoner transport, the protection of officers of the court, and for the security and safety of the judiciary. Last but not least, the Marshals Service operates the Witness Protection Program. Pretty awesome, right?

And within the U.S. Marshals Service there exists a division known as the Office of Public Affairs where there is a one-man department staffed by the aforementioned David Turk, who is the official historian of the agency.

Turk did his graduate work in U.S. history at George Mason University and joined the USMS in 1990. Within a year of joining he became the assistant to the first official historian of the service, Ted Calhoun. By late 2001 he was the official historian himself and during his tenure has gotten to conduct official historical writings, archive the historical collections and serve as a liaison to the forthcoming U.S. Marshals Museum opening in Fort Smith, Arkansas. He fields both internal and external historical requests, studies and processes official line-of-duty deaths for memorials, and plans special commemorative events such as some of the special ceremonies for the United States Marshals Service's 225th anniversary last year. 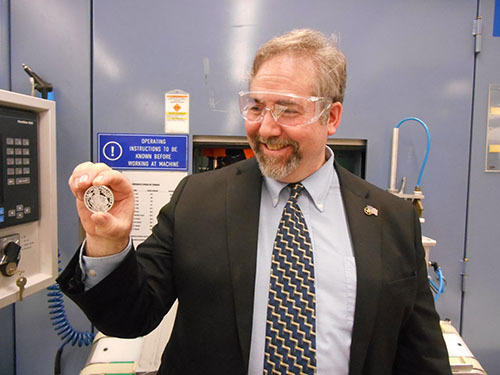 David Turk at the U.S. Mint at Philadelphia holding one of the commemorative
silver dollars for the United States Marshals Service's 225th Anniversary.

One of the highlights of his career has been co-coordinating the 2002-2003 commemorative ceremonies for the integration of the University of Mississippi. There were actually two different events, one in Mississippi where the retired deputies who guarded James Meredith met him for the first time since 1962 and then a second ceremony where then Attorney General John Ashcroft honored them in the Great Hall of the Department of Justice in the summer of 2003.

David is a busy guy and in addition to his work with the USMS, he researches mysteries of the Old West. Lately, his hobby caught the attention of an agency called Cold West, which solves 19th century cold cases. One of the cases that interested him put him hot on the trail of the authentication of the Billy the Kid "Croquet" tintype that surfaced in a Clovis, California antique store back in 2010. He also has a book coming out in July entitled, Forging the Star, that will be published by the University of North Texas Press. The book will explain the evolution of the agency in the modern era. 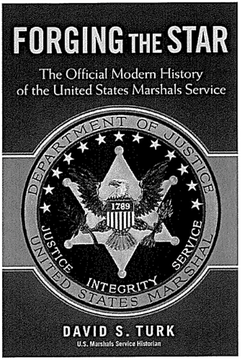 Again, the point of this article is simply to point out that there are jobs out there where you can pursue your passion (ahem, history buffs). When I asked David where he plans to go after the USMS he responded, "I would like to retire from this job and the agency. I really love it. I've never really thought about anything else." It is rare in this day and age to hear someone who actually wants to spend the remainder of their career in the same job. But when you are the official historian for the U.S. Marshals Service it would be pretty hard to give that up.

Perhaps there are days when following the protocols and routines of a government bureaucracy can make you feel a little Peter Gibbons or dare I say, Milton-esque, but all in all, researching and recording the stories of one of the coolest law enforcement agencies in the land isn't a bad days work and its proof that for history majors out there, there is a way to pursue your love of history professionally. 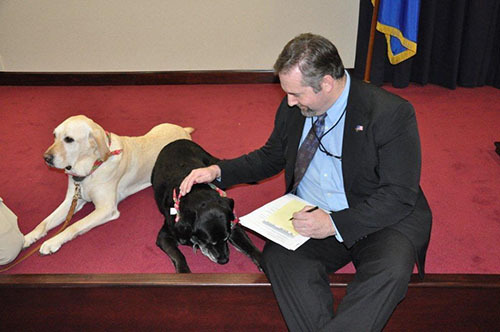 David with Max and Beacon, the K-9 deputies that broke the DC Sniper case