Exploring, as he puts it, the "increasingly murky ground between reality and fantasy, fixed identity and transformation," artist Hetain Patel has taken a 1988 Ford Fiesta and morphed it into a towering Transformer. 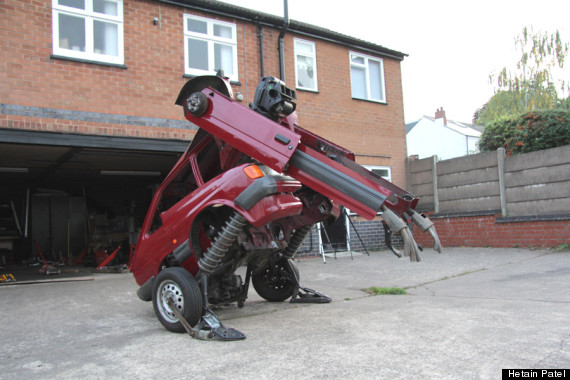 Collaborating with his dad, who converts cars into hearses for a living, Patel spent six months working on this ambitious project. His first sculpture, the work was inspired by Patel's dad and his immigrant, working-class background.

"My first car was a 1988 Ford Fiesta gifted to me by my father as I turned 17. Born in the U.K. to immigrant Indian parents, the passing of a car between generations provided me with my first taste of independence," the artist said, according to the TED Blog. "In this new work, I’ve reworked a newly acquired 1988 Ford Fiesta, of the same specifications as my original car, to create my first sculpture. Manufactured in England, this car stands as a symbol of working-class Britain -- a native body, albeit a metal one."

(Watch a time lapse of the sculpture's creation in the video above.) 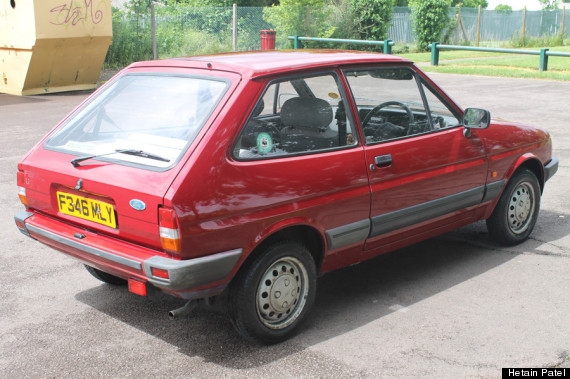 The 1988 Ford Fiesta that Patel used to create his Transformer. Patel pointed out that the license plate spells out a word that was especially meaningful to the project. "As you’ll see, even the number plate on the car is perfect, almost spelling out ‘family,’" he said, per the TED Blog. "That’s the original, untouched number plate of the car."

Influenced also by the "Transformers" entertainment franchise, Patel said that these metamorphosing robots could be seen as a metaphor for the Other -- as beings that exist "in a fantasy world where they can transform out of a marginal position into one of empowerment."

He says, however, that his Transformer is different from the ones we're familiar with.

"Unlike the popular toys and films, the car here is not a high-powered sports car or truck transformed into a powerful warrior, but rather a small, inexpensive Ford Fiesta transformed into a human, calmly squatting," he said of the sculpture, which is on display at the Galleria Continua in France until December.

"This posture is a recurring image in my work and forges a link between the lower classes in India and my immigrant family in the U.K., both of whom sit comfortably this way," Patel continued. "Naturally this introduces a tension in this sculpture between the seemingly submissive nature of the squat and, in this case, its oddly larger-than-life scale." 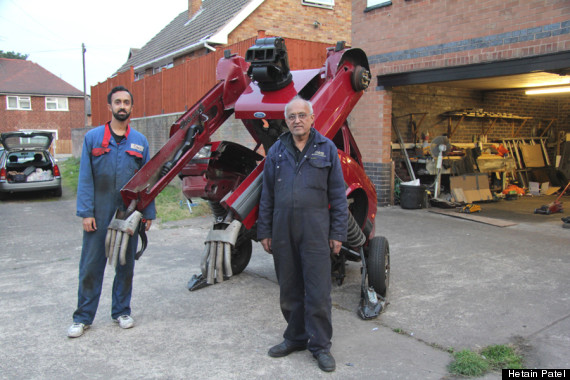 Patel and his dad stand in front of the completed Transformer.

Earlier this year, Patel, whose work has often explored the concept of identity formation, presented a poignant stage work at TEDGlobal 2013. He said that he hoped his performance would challenge preconceived notions of identity and authenticity.

“My artwork is about identity and leverage,” Patel said at the time, according to the TED Blog. “Challenging common assumptions on how we look or where we come from. Gender, race, class. What makes us who we are anyway?”