The year is 2012 and while most major news outlets have covered the role female voters will play in deciding the upcoming presidential election, CNN took things in what looked like a decidedly retro direction Wednesday, posing the question, "Do hormones drive women's votes?"

The article focused on a new study out of the University of Texas positing that women aren't voting based on their economic interests or issues of women's health or their personal values ... but based on their menstrual cycles. Yup, turns out ladies may just be too hormonal to be rational voters!

After an uproar around the Internet in which bloggers and news sources criticized the methodology of the study and the timing of the article on it, just two weeks before the election, CNN removed the article, stating, "After further review, it was determined that some elements of the story did not meet the editorial standards of CNN."

But the removal of the post doesn't seem to have silenced all of its critics, Ryan Gosling, for one. As always, we're pleased to offer the Gos a platform to share his thoughts on the subject -- with a little help from some friends. 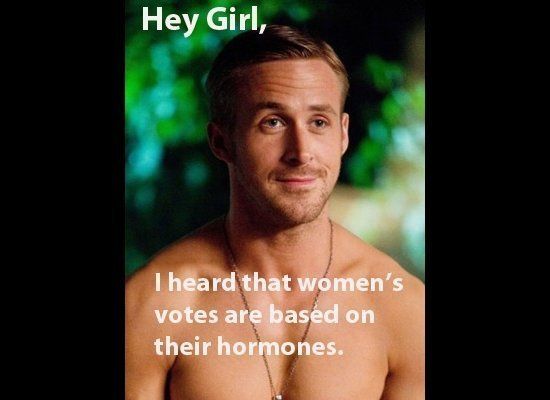