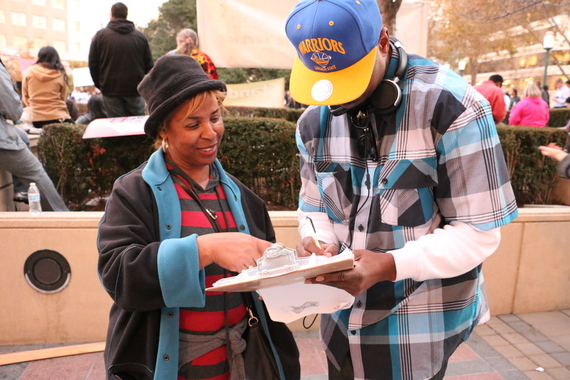 With less than 100 days until Election Day, Bernie Sanders supporters are looking beyond their candidate to the issues he championed in the first place. While their candidate may be out of the race, economic inequality -- which Sanders built his campaign around -- is still an issue worth fighting for all the way to November.

Sanders developed a strong core of followers looking to change a broken system. They were galvanized by his forceful condemnation of a rigged economy that is stacked against everyday American workers. They were propelled to vote in droves by the imperative to do something about income inequality, which he called the "great moral issue of our time." And they were moved to action by a need to raise wages and to build a political system that works for all.

Sanders' supporters knew that politics as usual just isn't working for working people. Career legislators are failing to do their job. Elected leaders are not enacting the changes needed to reduce economic inequality and allow working people to make progress toward achieving the American dream. They aren't passing legislation to address problems facing the majority of American workers or to stop powerful corporations that are using their influence to keep wages low, even for skilled workers like paramedics and nursing assistants.

Those who backed Sanders, especially millennials, want a transformation that rebuilds the middle class, and they want to have a say in the result. But just because this campaign-turned-movement is ending, voters don't need to give up on those goals. They should channel their energy and dedication into ballot initiatives, a powerful political tool that can bring concrete change for millions of working Americans.

Only ballot initiative campaigns offer voters the opportunity to do what politicians cannot or will not. Over the last two years, nearly a quarter of all states have used ballot initiatives to reform their economic systems. In 2014, four states with traditionally conservative populations increased the minimum wage after the majority of voters supported raises at the ballot box. This year ballot initiative campaigns in California, Oregon and the District of Columbia have already compelled lawmakers to increase the minimum wage proactively before voters passed the measures in November.

But there is more to be done, which is where the Sanders' campaign energy could be so important. Initiative campaigns in Maine, Washington, Arizona and Colorado are organizing to pass minimum wage increases in November. When Congress can't even raise the federal rate to $10 an hour, these states are looking at $12 and beyond. And they need the help of the millions who voted for a Vermont senator who answered the call to change a system where Americans are working longer hours for lower wages.

For the millions of Americans disenchanted with our political system and our economy, these campaigns present a great opportunity to change the power dynamic and continue the revolution.

Elections don't have to be just about who's in the White House or Congress -- they can be about directly fixing our broken economic system. Supporters of Sanders' campaign have an opportunity to use their power and passion to bring about direct change this cycle and beyond. Ballot initiatives can empower millions of voters this election to implement Sanders' message of economic fairness, state by state. We hope they join us in the fight.