(To get Ms. Palin's attention, I'm afraid I used an unforgivable number of ice hockey terms in this post.)

During your resignation speech on Sunday, you complained the media is constantly roughing you up. So I hate to pile on with another attack. Especially since you've been stuck in your own end for months.

But heads up, Ms. Palin, because a Web site with your name on it is stealing my blog content. It says you recently posted Iranians Worldwide Roll Out Green Scroll Against Ahmadinejad. I wrote that piece, but I don't see any links to my original story. In the blogosphere, that's called stealing content.

For the record, this isn't the first time you've taken a cheap shot at me. Earlier this month, you posted Iranian Women: We Feel Cheated, Frustrated, and Betrayed -- again without linking to my original story.

So it's gloves off, "Maverick."

Why? Because it appears the SarahPal.in Web site is for sale, which means somebody is loading it up with stolen content from me, the New York Times, and others -- in order to make a few bucks. And while we're on the subject of money, I see the SarahPAC (your political action committee) has already raised more than $1 million according to your spokesperson Meghan Stapleton. Do you have any idea what I get paid to write these Huffington Post blogs? (Hint: it's not a million dollars.)

For all I know, Ms. Palin, you may not even be aware there's a SarahPal.in Web site. But it has your name on it, so go for a little skate and turn the Webmaster's lights out. 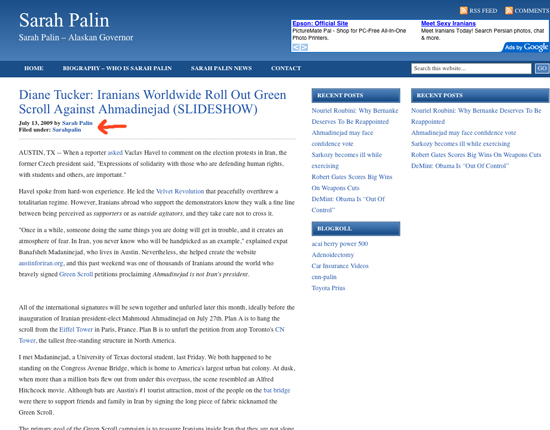 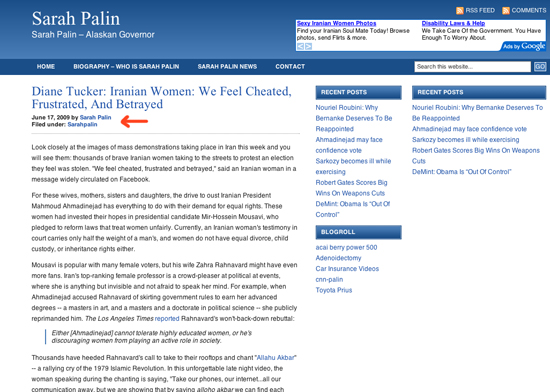