Rachel May founded The Hey Stranger Project in the same Oregon community where a tragic high school shooting took place this morning.

Hey Stranger as it is now started years ago with handwritten notes I'd leave in specific places, especially when I was having a rough day. I found it remarkably healing to possibly evoke a smile in someone else's life. It wasn't long before I began ordering them on printed cards in bulk to save time and to always have extras handy.

They sat in bags of change, little notes of reassurance left on hospital vending machines. Pass along a card and a cup of joe for the Camry behind me at Dutch Brothers. I'm feeling stressed over tuition costs? Leave a card and a campus cafe gift certificate inside a few of the more expensive books at the college bookstore. Car trouble getting me down? Leave a card and bus fare on a bus station bench. Soon my Partner suggested that I start sending them out to others: "Every card is a person. But you can only reach a finite number of people; love will multiply with more hands." He was right. With that in mind I started an Instagram account, and, in November 2013, I began sending cards to whoever wanted them -- for free.

I sent shipments every week and -- using a map a follower made me -- I began tracking the places they've gone. In the U.S. they've traveled from Alaska to Maryland, Southern Florida to Maine and hundreds of places in between. In Canada from BC to Ontario. The United Arab Emirates, Malaysia, Belize, Australia, Ireland, the United Kingdom and the Philippines -- I've even sent cards to France in French!

In the six months I've been shipping -- still in its infancy in the grand scheme of things -- I have dispensed around 10,000 cards to over 400 cities and over 500 "strangers." But the stories I have gotten to hear so far have been my favorite part.

With Hey Stranger, the giver and the receiver don't often come face to face but sometimes the stories unfold, and they are the true magic.

In one instance, a waitress from California messaged me about a gal who came up to her till with a Hey Stranger card, asking to pay for a young woman and her two children at a nearby table. The waitress informed her that the woman was a single working mother who brought her children in every payday so the kids could have milkshakes, never ordering a thing for herself and that she would definitely appreciate the gesture. The woman paying was so touched she asked for the waitress to ring up a $100 gift card so the woman wouldn't have to worry about missing a Friday date with her kids.

A barista at a cafe in Florida tells me a "Stranger" regularly buys coffees and pastries, leaving cards along with them -- 10 at a time -- for the homeless.

Another woman tells me that someone came into a children's hospital with a card and flowers, telling the receptionist to give them to the parents of the sickest patient. This was her, and she tells me no one will ever know what that meant to her.

I can imagine there are hundreds more stories just like this, that I just haven't heard yet.

Sometimes these cards are just left in really touching and meaningful places to be found by another who may need it. One told me that she left them in an oncology clinic, someone else put some in the waiting rooms of fertility specialists, hidden in the magazines she saw many couples mindlessly flipping through. A man tells me he leaves a few each week at a meeting place for recovering addicts. One person shared that they left a few in the funeral home, while there for their own loved one's funeral. Someone else left a card and paid the adoption fee of a senior cat, so she would be free for whoever took her home. I'm hearing stories of people finding ways to love on others in their own lives, people they probably won't ever meet. It is simply beautiful.

A gal requested cards to send out with her care packages for cancer patients. Another woman asked for 54 cards so she could do 54 acts of love on her 54th birthday. The best part? She actually ran out before her birthday came and I just sent another 54 in the mail to her. These cards have been left with gifts, hung on trees and stuck under windshield wipers. One fellow in Tennessee told me he saw someone get a parking ticket, so he slipped one into the envelope with a $50 bill.

A gal in France buys flowers every week for people she will never even meet. Some leave cards with tips at restaurants or for breakfast for the car behind them at a drive thru. One lady tells me her favorite is paying strangers tolls and giving them cards at a Washington toll bridge. Another paid the dinner tab for a table of high school student athletes. There's one who leaves them with money taped to gas pumps. People are buying each other dinners, coffees, newspapers and groceries.

I've heard these incredible stories of how these simple cards were used to show love when paired with a willing and giving heart. I may only have a couple handfuls of stories from recipients out of the 10,000+ and counting that are out there, but I know there are more. With each pack of cards I ship out, each photo sent to me from a stranger or each story I hear, I am reminded that these cards aren't the focal point. These cards are merely a physical reminder of the greater love that exists in the core of people. I'm reminded that while we are surrounded by a lot of negative noise in our days, love is louder and love matters. 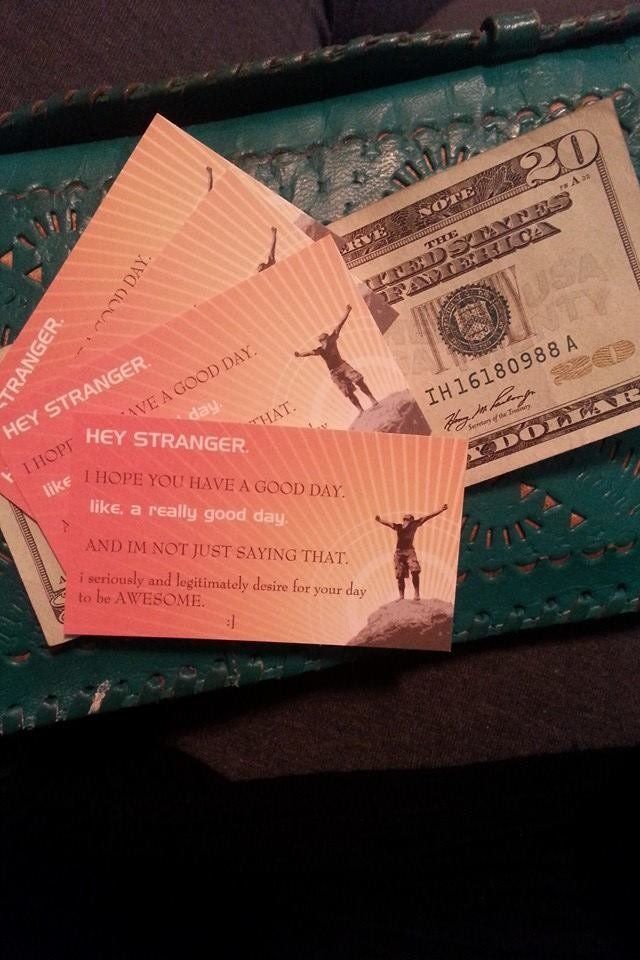 1 / 10
The Hey Stranger Project | Photo Courtesy of Rachel May