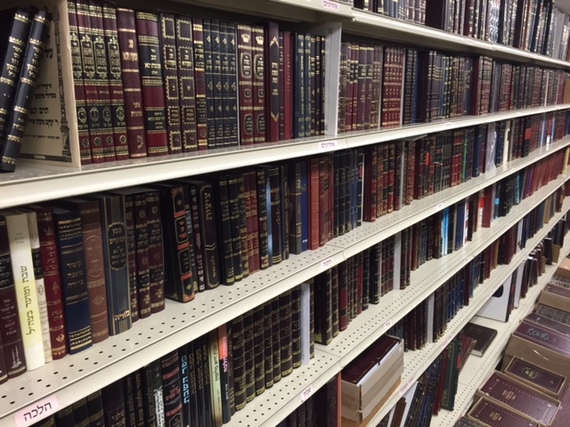 Another Upper West Side story from some twenty years ago...

Carrying a sizeable, velvet-mantled scroll in my arms, from its ark in the sanctuary toward a celebration at a nearby student residence, the watchful guard at the Seminary gate, Mr. MacMillan, challenged me:

"Hey! Where'd you get that Torah?"

And then, of course, he wanted to know - "And where're you takin' it?"

Philosophically, these are interesting questions.

I like to tell rabbinical students that the question of where Torah comes from is very much like the question of where babies come from - especially if one means Torah in its broad sense, as not only the consonants on the parchment but also the layers and ages of elaboration that amount to the legacy today.

The question about Torah's origin tends to bring on a similar pall of fluster and mystery, and - as with "Where do babies come from?" - there are different kinds of responses, keyed to differing levels of readiness for different sorts of answers.

One may start with oblique generalities - "Well, when a God and a people love each other very much, in a very special way..."

But pretty soon the child, actual or metaphoric, comes back wanting to know exactly how the process works. And then, before too long, the adolescent wonders about trying out the generative mechanics oneself.

One story: "The people stood all together beneath the mountain, and, at each and every thundering, divine pronouncement, they set about commenting and expounding and elaborating and expanding, each person perceiving according to unique strengths and capabilities, and everyone optimally able."

A third story: "Each word went about and presented itself to each Israelite individually, saying, 'I am this commandment - do you accept me? But before you answer, let me tell you all the details that are contained within me, all the particulars, the nuances, the fine points. Now, do you wish to accept me? And you? And you? Good! Then let me kiss you all upon the mouth.'"

I had the privilege of studying these ancient and medieval Midrashim - these rabbinic narratives of Sinai - with the pioneering Talmudist, Professor David Weiss Halivni, as he crafted his own distinctive account of where Torah came from. He explains the accounts as follows:

The first of the three stories - Sinai as study-hall, the Israelites interpreting creatively - comes from the early centuries of the Common Era, when it was necessary to justify the enterprise of re-inventing Torah, in the wake of Jerusalem's destruction, for a new era and a new reality. "You see" - says this story, in effect - "there never was such a thing as Torah in this world without our being productively involved; our ancestors set about applying their minds and interpreting, from the very first moment of revelation, and so we must do."

The second story came about once that process had presented an almost co-equal rabbinic Torah to go with the scriptural one. The question then became: on what basis believe that such a trove of elaboration could be deemed Torah, along with the scroll? The second narrative's answer was that our ancestors at Sinai knew - in a flash, so great it overwhelmed them, as each and every word exploded upon them - that all of this was packed deep inside that.

And the third account - each commandment listing its own fine print (somewhat like the Genie in the Disney version of Aladdin) and being embraced, with all its provisos and entailed details, by each and every Israelite at the mountain? By the time of that story there was already what we might call a whole library of rabbinic commentary and codification, so canonical that any notion of human involvement in its genesis was theologically uncomfortable. So the story became: Your ancestors had this all spelled out to them at Sinai, and they accepted it.

It is not accidental that the eighteenth and nineteenth century Hasidic tradition, which recaptured and rekindled the creative genius of Midrash, taking the soaring elaboration of Torah to new spiritual heights, again told a story of Sinai that made abundant room for the human mind and soul. Rabbi Naftali Tzvi Horowitz of Ropshitz (1760-1827) said, in the name of his teacher, Rabbi Menachem Mendel of Rimanov (1745-1815) that what God actually spoke at Sinai was only the first letter Aleph of the word "Anokhi" - "I am." The rest was - well, 'commentary' would be far too pedestrian a word for what those Hasidic sages believed could happen when that reality was realized.

As we come, in our cycle of Torah-reading, to the story of Sinai, I recommend taking some moments for your own response to the challenge - "Hey! Where'd you get that Torah?"

Whatever is involved in your answer - parents, school, teachers, friends, Sinai, the depths of a collective past, the searching of your own soul - you will no doubt have your own distinctive sense of what it means to you to be a recipient of Torah.

As to that other question - "Where're you taking it?" - well, that adventure has a great deal to do with why I love working in a Jewish community of Harvard students, in all their diversity.