After working on the set of a TV pilot recently, I posted a photo of a rare event: a predominantly female crew. 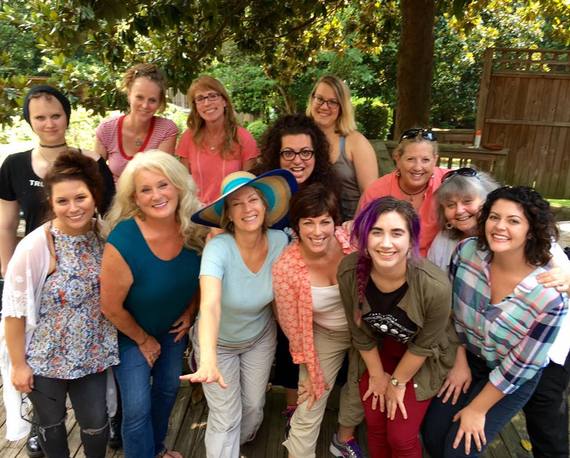 Within hours, one of the male crew members replied: "Somehow the six men who were also contributing a bit kind of got forgotten. I'm here to remind that we were in the trenches as well." Never mind that I'd posted many other photos of male cast and crew members throughout the shoot -- this was the one that grabbed his attention. Because I named -- and celebrated -- the difference between this and the overwhelming majority of crew photos.

My fingers started twitching, burning to type a flaming response. "Seriously? Are you kidding me? Because I post one without male representation, highlighting a celebratory moment, you feel excluded? Can you imagine what it might feel like to almost never see people who look like you in a photo recognizing achievement?"

But I took a breath, because I know this guy. I like this guy. He's smart and funny and super-talented. I forced myself to remember to wonder "What's going on in his world, that would make him post such a public statement?"

I also heard the echoes of others who'd asked "Why do you need a parade? Where's my parade?" and whose response from the very first #BlackLivesMatter was #AllLivesMatter.

Blessed are those who don't need a parade or a hashtag for their innate worth is already legally and culturally recognized.

Blessed are those who, when they hear of a crime, don't hold their breath, silently praying that the person convicted doesn't share their race.

Blessed are those who, when they hear of a mass shooting, don't cringe, anticipating the public response if the murderer happens to claim their religion.

Blessed are those who, when attacked after a frat party or working late, aren't asked why they were alone after dark or were wearing those kinds of clothes.

Blessed are those who, after being violently assaulted on the street, aren't asked why they were holding their loved one's hand or flaunting their identity.

Given a choice between an annual parade or daily privilege, what would you pick?

It's natural to say "What about me? My life isn't a cake-walk." And it likely isn't. So pretend for a moment: Add to the challenge of your life the possibility of legally losing your job because of who you love so that daily you have to choose between making a living or living a lie. Add to it that your skin tone causes people to hold their bags a little tighter when passing you on the sidewalk at dusk. Add to it that you're a woman in your mid-30s and your manager casually asks if you're thinking of starting a family soon and you know he's considering which employee to promote. Add to it that your children come home and ask what 'deported' means.

And once you've virtually experienced a few of those -- on top of just trying to get through your day -- ask yourself: Would you be tired of people automatically deciding your skills, qualities and aspirations because of what you look like?

Don't get me wrong, some of my best friends are heterosexual, white men. I'm not bashing anyone -- including my filmmaker friend -- for not inherently knowing what it is like to be negatively judged based on gender, race or sexual orientation and having to work twice as hard to have half a chance. It's not their fault they were born with a certain privilege and have wisely taken advantage of the readily-available resources at their disposal. I certainly have, as the white daughter of educated parents who instilled in me the knowledge that I would go to college and the belief that I could be anything I wanted to be.

And while that privilege has helped me overcome some of the cultural barriers of being a woman and a bisexual lesbian, it also gives me responsibility: to use whatever advantages I have to support those who are also trying to make their way in the world, to honor their struggle to be visible and have a voice, and to celebrate their accomplishments.

Believe me, I'd gladly trade my parade for legal recognition and my hashtag for a level playing field where words and history aren't stacked against achievement.

For so long, women were deemed incapable of being scientists, astronauts, presidents, soldiers. As late as last week, at (openly gay) Army Secretary Eric Fanning's Welcoming Ceremony, Secretary of Defense Ash Carter proudly showcased the Army's inclusiveness. His words, however, inadvertently revealed how far women have yet to march: "We've opened all combat positions to women who can meet our standards." I wanted to jump up, disrupt the ceremony and ask "Do you let men into combat positions if they don't meet your standards?" Of course not -- and yet he felt it necessary to include that disclaimer when talking about women. Because women still have to prove that if they have the title, they've really, really earned it.

So yeah, when we're finally recognized or achieve the improbable, I'm going to celebrate. And I'm going to post a photo to show what is possible. Don't feel left out because your demographic doesn't have a parade or a hashtag: the very fact that you don't need one shows you're already included.