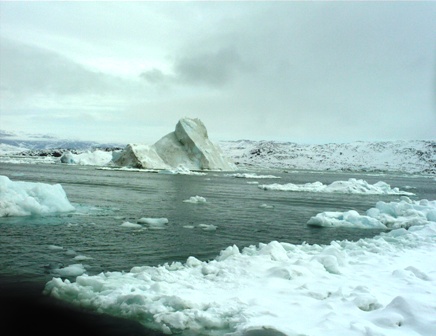 Later this week -- if troubles abate at the climate change talks in Copenhagen -- President Obama will speak with 191 other world leaders about the global warming crisis. But there is posturing and bickering and real problems to resolve from countries rich and poor. The conference leader has resigned. Protests are increasing. It's a depressing, dangerous scenario.

This past Polar Year -- which actually has been going on for two -- more than a thousand researchers from sixty countries reported on polar climate change both in the Arctic and Antarctic. Their reports told us more definitively about how much of the ice is melting, and the role of gases and emissions, in the future. And the results were worse than expected. (See the February 21, 2009 New York Times editorial on newest stats about global warming.)

I posted here about my trips near the poles in early 2008. I cruised within a few degrees of 70 latitude south in Antarctica, and six weeks later I flew to northern Greenland at the same latitude north, 250 kilometers above the Arctic circle. (As my friends wryly note, I'm now bi-polar.)

Whatever the cause, I've seen the effects of global warming with my own eyes, and listened to Greenland fishermen who have no agenda except to make a living and feed their families. Since I was there, glacial melt is increasing in the Arctic, and a huge chunk of Antarctica is right now floating towards Australia.

And despite this, the politics remain dismaying and intransigent. Even talking together is a problem.

Al Gore may have some recent trouble with stats, but in An Inconvenient Truth, has projected with scientfic backing that if we emit only twice the amount of carbon dioxide and greenhouse gases we do now, and if the temperature increases by only a couple of degrees, the almost three-kilometer thick Greenlandic inland ice will melt away. Global sea level will rise over twenty feet, causing world catastrophe. The horizon for such a scenario is a few thousand -- or even a few hundred years -- depending on which researcher you ask.

Why has Greenland become a major symbol for global warming? The Greenland ice cap, fourteen times the size of England, covers most of this largest island in the world, and contains ten per cent of the world's total reserves of fresh water. The ice is constantly changing and moving, and every year sheds thousands of icebergs into the sea from glaciers in the central and north-western regions. These bergs consist of heavily compacted snow that fell up to 15,000 years ago.

The ice fjord I visited near Ilulissat is a UNESCO World Heritage site. Sermeq Kujalleq near there, the fastest moving glacier in the world, produces the most ice -- twenty million tons a day. But since 1840 it has shrunk forty kilometers, and in the past few years alone, over fifteen kilometers -- the equivalent of about ten meters, or thirty feet a day.

In 2007, Arctic-Ocean ice was half of what it was four years before, and warming will trigger icebergs to break free from the leading edge of glaciers more frequently, opening the way for the glaciers to race even faster to the sea.

Some climate researchers from the Snow and Ice Data Center in Boulder Colorado now believe that these warming Arctic waters could be completely ice free by 2012. (Scientists previously estimated this wouldn't happen until 2040.)

Two Aprils ago I passed within a few hundred feet of icebergs big as battleships, fortresses, cathedrals and islands, and thousands of smaller chunks gently drifted past in the Arctic currents. Some of this ice will float more than 2,500 miles south before melting at latitudes of around 40 degrees, the latitude of New York. 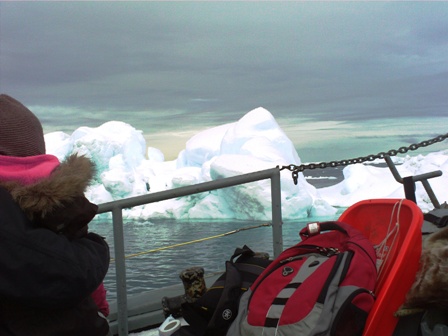 The ice took all shapes, and openings in some icebergs were large enough to tempt our little red fishing boat to sail through (we didn't), and we crunched over ice the size of cars. Aqua water outlined the seven-eighths of ice below the surface, and small, clear bits -- frozen rain trapped maybe thousands of years ago and now freed -- float pure and sweet around us, like crystals in the sun.

Despite the warming trend, ice and snow surrounded me in Greenland. I gingerly walked on it, and dog-sledged for hours along steep, white, glistening fields behind a fan of fifteen Greenlandic dogs and an Inuit driver sharing my sledge. And from the little red Dash-7 Air Greenland plane I gazed down on thousands of bergs in the sea, white polka dots on blue velvet.

Looking inland, the vast icecap stretched as far as I could see. Near Kangerlussuaq, the air hub where we made connections, I stepped onto this huge remnant from the last ice age. I'm no expert on global warming, but I did talk to dozens of locals, mainly fishermen, who make their living at the Royal Greenland fisheries from these waters. Some of what they said:

-- The water temperature is two or three degrees warmer than in the recent past.

-- Cod have moved to the area, and shrimp have moved further north. Fishermen have not been able to ice fish recently, and they can now sail into previously icebound fjords year round.

-- Sealers and whalers in Qaanaaq in north Greenland, say that the sea ice is three feet thinner today than earlier.

-- For the past ten years the Ilulissat harbor has not frozen, and it always did before.

People are reacting to this and Greenland is becoming a world center of climate research. Three Ilulissat warehouses are now Kangia Ice Fjord station, where scientists and researchers will study climate change on a regular basis.

John McCain, Nancy Pelosi and other pols have already made the pilgrimage to Greenland's melting icecap. They, like me, were probably shocked by the sea of floating ice, beautiful yet bittersweet. And it's getting worse. Besides these iceberg-clogged Arctic waters, a couple of weeks after I returned from Antarctica, the Wilkins ice shelf, 160 square miles wide, broke off near the western peninsula, near waters where I had been cruising.

Questions may still exist as to the speed of declining ice, but facts now show it is declining faster than ever recorded. What can we do? And can we get our act together and take a world view before we destroy the planet and ourselves?

We shall see what comes out of Copenhagen this week.

Witnessing the silent white/blue coldness of ice shelves, ice caps, glaciers and icebergs in our polar regions is life-altering. How can all countries not be moved to go green in every way possible, when the white of the world seems to be melting before our eyes?