I've been observing you all for a very long time. I have a few questions for you all. But first, let me tell you a bit about myself and why I am frustrated with you lot.

My name is Kanza Khan. I grew up all around North America, but that didn't stop any of you from finding me. You were at Sunday school, at Jummah and Eid prayers, at family/friends gatherings, and you were on YouTube. You tried so hard to instill your beliefs on to me. You would corner me and make absurd declarations to my face, the face that was still holding its innocence. The "fatwas" that call for women to stay home and solely cook and take care of their husband and kids. The "fatwas" that would try to tell me that because a strand of my hair was showing while praying Jummah, I was going to Hell. The "fatwas" that would tell me that because I didn't pray five times a day, I was guaranteed Hell. The words you all spoke told me one thing: God hated everyone, especially me.

I grew up thinking that God hated me, that I was constantly doing something wrong. I just wasn't enough for the Creator. I would drive by billboards that say, "Jesus loves you." How could Jesus love me when the God who created him and I hated me?

You, along with 9/11, made me feel as if being Muslim or part of Islam was bad. What else was a nine years old girl supposed to think? I began to deter away from the very religion that had given me so much joy growing up: my mom sharing bed time stories about the prophets; Eid festivities; and the feeling a sense of peace when the adhan echoed around the house.

So while you blow up social media, blare your voice in the mosque, and try to give me the death stare in social settings, just know that your actions are doing more harm than good. I remember a time during Eid prayer. Women wearing dresses of various colors and glitter were squished together ready to pray. I noticed around me that many of them were wearing dresses with short sleeves. A lot of them had their hair dangling out of the loosely tied scarf -- all in an attempt to keep their hair perfect because you know, it is Eid.

Now don't get me wrong, I have no issues with this whatsoever. "You do you" is my motto when it comes to how people practice a religion. What I really had an issue with was you. How come you called out the girls, who during Friday prayers, had their back of the neck slightly showing while they bowed to down to pray. They were in the middle of praying for God's sake. You made them break their prayer! You shamed these girls, and I'm sure many of them now associate Friday prayers and mosque with not the nicest of vocabulary. On the other hand, you refused to call out the women who had their hair and skin showing because these women were wearing cultural dresses on Eid. How could you go against cultural practices? Silly me for thinking what you do to the girls during Friday prayers would be something you would do on Eid. Astagh to me for ever thinking that. Astagh.

It was not until high school and college that I finally understood you and your role in my life. First of all, you assuming you know where I'll end up in the next world is hilarious. You are nobody. You make no sense. Your job is to push people away from Islam. I'll thank you for one thing though: you made me understand that Islam is perfect, but the people practicing it may not be. This understanding has given me so much peace because it takes into account that we all have our own personal journey, our own personal narrative, and our personal relationship with God. No one and I mean no one can take that away from me, not even you.

As you can see, I clearly have no respect for the haraam police. More often than not, these unofficial police members ends up tarnishing the tolerance, open-mindedness and respect taught in Islam.

Coming to you from Coming of Faith, The Expose the first episode, Am I White Enough? 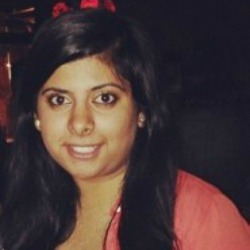 Kanza Khan is the host and executive producer of The Expose. A storytelling and civil rights leader, Khan graduated from James Madison College at Michigan State University May of 2014. Kanza believes in tackling injustice through sharing narratives and by creating a space for dialogues. During her time in school, she raised awareness on social justice through her work in theatre and spoken word.

Coming of Faith believes in the power of stories. We're founded on a simple idea: minority voices deserve to be heard in an inclusive and thought provoking space.

This post was originally published on Coming of Faith.

Other recent stories include:
How to survive being ghosted
The big, bad wolf came to Copenhagen
Let's talk about male rape on TV
Why women feel silenced at work