I love HGTV. I love everything about it. It is, in fact, the safe channel for my kids. And by that I mean that when my husband is watching Cops, the news or any other totally inappropriate show with swearing/drugs and derelicts, I simply yell, "HGTV." He gets it. I also love the comfort, the familiarity, the predictability.

We understand that the Property Brothers will always bring their latest clients to a house that they can't afford to show them how insane they are for believing they can buy perfection on their budget. And after the twins dangle the proverbial carrot in front of the home buyers, they always act surprised that Drew and Jonathan could be so cruel. And yes, this does seem strange since the couple must have seen the show and known what to expect.

Yet, this predictability is part of HGTV's appeal and while it may appear that it leads to boredom and viewer fatigue, it doesn't have to. I give you HGTV: The Drinking Game. I will use some of HGTV's most popular shows, complete with alcohol and snack pairings. Next time you get the kids to bed early and invite the hubby to join you, keep this list handy. 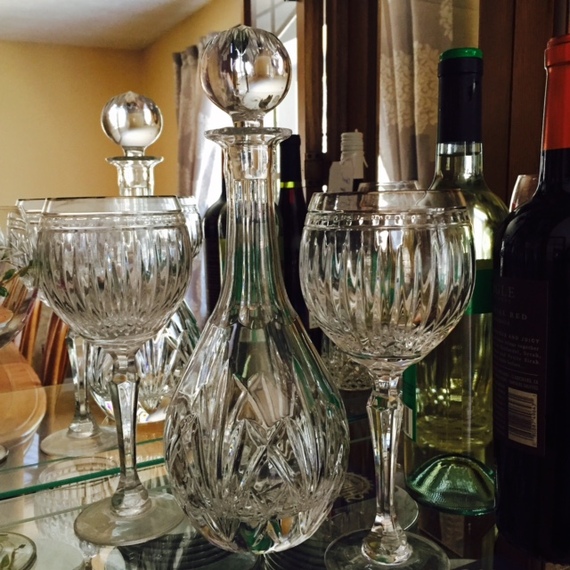 
Snack suggestions: Beer Nuts or regular old bar peanuts for Jon Jon fans and brie, capers and grapes if you like Drewby.

Beverage pairings: Beer if you like the contractor brother (Jonathan) -- an import of some sort, maybe a blonde. The guy did have highlights. Wine if you like the realtor brother (Drew) or maybe a gin and tonic. That man is very fancy with his suits.

The couple (normally the woman) begins taking the decisions out of Jonathan's hands and oversteps the clearly drawn boundaries.

The husband rolls his eyes knowingly as his demanding wife, who is not a designer or involved in real estate or home repair in any way, picks something out that they didn't talk about.

He gives up and in.

The brothers get annoyed with the couple.

The brothers get annoyed with each other.

The couple is upset to find their last minute, and often strange requests (a rock climbing wall in the bathroom), jack up the price and blow the contingency budget.

Jonathan has already blown the budget on a new foundation or other major issue that you would think would have been red flagged during the home inspection.

You think Drew has an easier job because he simply has to sell the beautiful, modern, like-new house his poor worker brother had to fix up.

You realize that you still don't know the difference between Jonathan and Drew. Who can blame you? They are twins. Hint: One wears a suit and the other flannels and jeans.

Drew tells the couple to keep the house clean while they show the place in spite of the five kids running around, hence the need for a new house. Oops, that's a different Scott brothers' show. Sorry, I've been drinking. How many shows do these boys have anyway?

Snack suggestions: For Chip fans-chips and dip, a ranch or maybe some salsa. If you love Jo, homemade cookies or bread made from the fresh eggs and milk of farm animals (because they have a farm).

Beverage pairings: If you like Chip it's beer in a Baylor koozie. Something domestic-Bud or Coors. Or you can go south of the border with a Corona and lime. And Jo would keep it classy with either a martini (maybe a Cosmo or an Appletini). You could also go Stoli Raz and tonic.

Jo says shiplap. Okay, this one may get you sick drunk. Keep a throw up bucket nearby... Jo really likes shiplap.

Drink twice if they make a joke about shiplap or Jo's obsession with the white wood.

Chip makes a joke about something sexual or his height.

They say, "open this up," or "open up." What do these two have against defined spaces/rooms?

Chips says something dumb or embarrassing. Jo rolls her eyes and looks exasperated.

They show an animal. Drink twice if it's a goat. Drink again if they show the Magnolia Farm sign or the silo.

Chip says something like, "Jo, I think we have a problem."

Chip makes Jo call the homeowner about "the problem." Drink twice if Chip makes the call (this is as rare as unicorn dust).

Jo has the client out to the farm. Drink once if they pick the cheapest special project option with the leftover money, twice for the most expensive.

Jo and Chip pimp themselves out with a commercial for their show -- during their show.

When there is a surprise or big news and Jo makes her, "surprise," face as they cut to commercial.

Snack suggestions: Party foods like pigs in a blanket, cheese and crackers or chicken wings. This is in honor of the end of the show when the new homeowners finally have family over for a celebration. No, it doesn't look staged.

Beverage pairings: Margaritas -- because they are fun!

The couple can't agree on a home style or where they want to live. (He wants a fixer-upper, she wants move-in ready or he wants modern, she wants traditional).

The agent has to school the home buyers on the realities of homeownership because they want more than they can afford.

They want a music room, man cave or craft room.

Anyone says the word, "spacious," "curb appeal," "stainless steel" or "granite." Drink twice if it's the realtor.

Drink once if they have a dog. Twice if they need a yard for the dog. Do a shot if the dog has a stupid name.

Either one of the couple is uncomfortable with the "high end" of the budget.

They want the city but the realtor tells them the city is expensive and brings them to the suburbs. Drink again if they seem pissed.

The realtor shows them something over budget. Drink again if they seem pissed.

The realtor tells them it has been on the market forever and they can get a deal.

Once if the demanding husband calls the shots, and he'll make the final decision. Twice if it will be the pushy wife. Do a shot if they compromise.

You are placing bets on how long the marriage will last.

You question why they got married at all.

They are an odd couple.

The husband is too tall for the shower or doesn't fit in the tub.

HGTV is fun but can be even more fun with the proper beverage and snack. Enjoy and drink responsibly!