Nalandabodhi sponsored the final stop of HH the Karmapa's US tour last weekend, and the 1,200 people who attended his public teachings last Saturday had the rare and auspicious opportunity to spend some time with a revered young global spiritual leader. In order to be one of those people, you had to be among the relatively more affluent elite as tickets were priced from a maximum of $500 to a minimum of $40. And nowhere did anyone see the often used Buddhist / New Age slogan "no one will be turned away due to lack of funds," which assures that teachings are available to everyone.

We know that the Buddha never charged for his teachings, and I have no doubt that the HH the Karmapa and Nalandabodhi's Spiritual Leader Dzogchen Ponlop Rinpoche had nothing to do with what Nalandabodhi management decided to do with their leg of the Karmapa's two-month American tour. In many of his presentations, tickets were given away free of charge, but in Seattle the 1,500 seats were quite pricy with the "cheap" $40 seats selling out in the first day of sale. 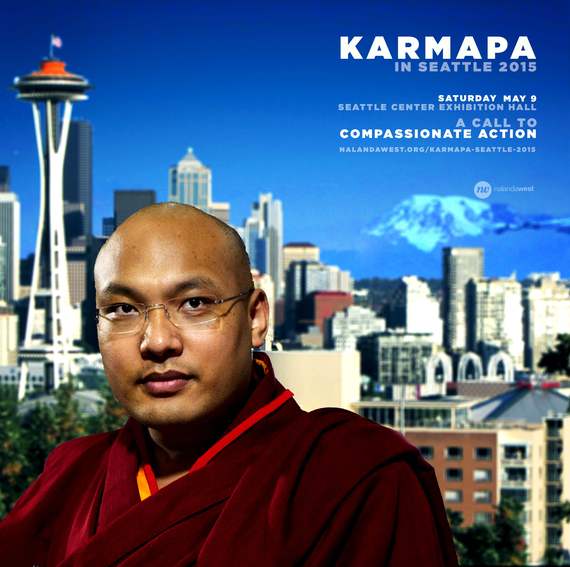 I strongly believe that anyone who wants to get into such a spiritual teaching should be allowed to participate unless the event is sold out, and this event was far from sold out. I estimate that there were at least 300 - 500 empty seats at the Seattle Center Exhibition Hall, which is designed to be an exhibition area and not a place for large performances or lectures as happened with the Karmapa.

Not that all those seats had a good view of the stage. The flat rather than banked layout of the site as well as the enormous columns that blocked the view for many people left some participants wondering why they paid to be in the room rather than watching a livestream at home. Granted, Nalandabodhi management did provide several large screen monitors so that the majority of the audience could see because so many were too far away to see or simply sitting behind the columns.

Still, had the Nalandabodhi management been concerned enough to inform participants about the seating issues beforehand, people could have watched the same thing they saw on the big screens from the comfort of their homes at no charge (thanks to the Karmapa's office which live streamed the event and many of his other teachings at no charge, which is how dharma is supposed to be shared). Of course, if everyone had done that Nalandabodhi would not have made money.

Which reminds me of what my teacher and mentor Buckminster Fuller often told audiences about making money. Bucky said, "You can make money or you can make sense because the two are mutually exclusive."

Nalandabodhi management and its sister organization Nitartha Institute for Higher Buddhist Studies (where Nalandabodhi teachers recommend people for advanced studies) have always done their best to make as much money as possible, often pricing their events out of the range of ordinary working people, and this Karmapa tour stop was no exceptions. At least a couple hundred volunteers put in numerous hours preparing and producing the event and for their efforts Nalandabodhi management gave them - the chance to purchase tickets to the event at full price a day before the general public. That's right, they didn't even provide seats for their own volunteers, and the least expensive ticket was $40 plus fees and taxes.

Then, there is the fact that there were no discounts for students or seniors or monastics. Buddhist Nuns and Monks had to pay full price just like anyone else.

In addition to the 1,200 people paying between $40 and $500 for a ticket (do the math to figure out how much they took in for this one event), Nalandabodhi also requested that members donate money to support this visit. Their plea read,

You are here with us and we wish to give you the opportunity through this fundraiser to offer your personal gift of support for His Holiness' visit in Seattle. Your gift will help with all aspects of his visit such as nourishment, flowers and physical gifts of value to His Holiness, and the 8-10 people traveling with him, while he is in Seattle.

All proceeds will go to Nalandabodhi in support of His Holiness the Karmapa's visit to Seattle.

I'm not saying that HH the Karmapa or Dzogchen Ponlop Rinpoche had any intention to keep poor people from attending or use this occasion to make as much money as possible. In fact, I doubt that either of them had any knowledge of what the Nalandabodhi management has done.

One only need to compare the Nalandabodhi way to what will be happening in a couple weeks when Mata Amritanandamayi (a.k.a. Amma) begins her North American Tour here in the Seattle area. Amma's people take donations at all her public events, and that money is transparently used for the enormous amount of charity she provides to the poor. However, all Amma's events and teachings are provided free of charge to everyone.

Amma's people have to rent space, feed people, transport people, etc. just like Nalandabodhi, but they manage to do so without $500 tickets or pleas for financial contributions from members. They make sense, and people contribute generously to their work.

Not so much with Nalandabodhi, which is known to produce very expensive Buddhist teaching programs and to constantly demand more and more from their members. Perhaps its time for the same sense of oneness and giving found in the Amma community to be manifest at the Nalandabodhi sangha. Then, the Buddha's teaching would truly be available to all people who come to Nalandabodhi and Nitartha Institute for Higher Buddhist Studies.

May all people be fully welcomed into all spiritual teachings and groups in order to support their full awakening.

Update: In the interest of full disclosure, I, Steven Sieden, submit the following:

I have never been paid for any contributions to the Nalandabodhi Sangha, and over the years, I have contributed hundreds if not thousands of hours of volunteer time to the Nalandabodhi Sangha. Because of my 40 years experience as a professional event producer, in 2008 I was asked by the management of Nalandabodhi to submit a proposal for production of their scheduled 2009 Pema Chodron event. I created an extensive document (at no charge), and that proposal was summarily rejected (see comment below for details).

I was a volunteer on the team doing Ikebana flowers for the HH Karmapa event described in this post. As a volunteer I followed instructions and purchased a $40 ticket to the event a day before sales were open to the general public. That seat ended up being way in the rear and directly behind an enormous column with no view of the stage, but I was never informed that it was an obstructed view.

It was not until a few days before the event that I was told that 75 event seats might be available for volunteers. I did not take advantage of that possibility and entered with my $40 ticket. When the event was over, I worked with the Ikebana flower team to take down and remove the floral displays.