If only all cancer patients were lucky enough to have a family like this surrounding them.

On Monday, Chicago's Rush University Medical Center took to their social media accounts with the hope of solving a mystery uncovered by one of their nurses: a message written in the snow covering the top of the hospital's parking garage over the weekend.

The message reads "HI MOM GOD BLESS U!" with a smiley face inside the "O" of "MOM." 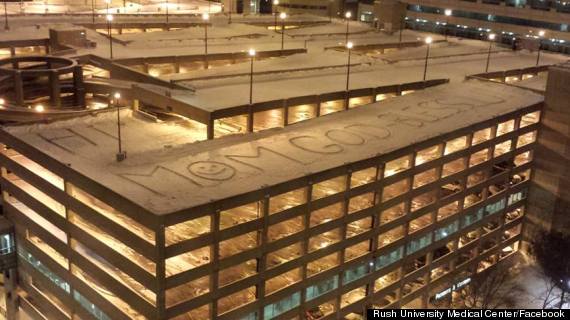 The hospital presumed the message was intended for a Rush patient and they were correct. The Chicago Tribune reported Tuesday afternoon the message had been written out in the freshly fallen snow by the 14-year-old son, brother and husband of Sharon Hart, a Bolingbrook, Ill. woman undergoing chemotherapy for acute myeloid leukemia that day.

Hart told the Tribune her son had called her after stomping out "HI MOM" and that her husband and brother added the rest later, intending to write "GOD BLESS YOU ALL" but running out of room.

"I’m glad so many people got to see the message and that it touched so many," she told the paper. "It shows how big God is."

"It brought so many smiles to our doctors and nurses – and patients as well," Rush spokeswoman Deb Song said, according to ABC News.

One of those nurses was Angela Washek, who first caught a look at the heartwarming message early Sunday and snapped the photo that has since spread throughout the country.

"No matter how cold it gets, there is always a message of warmth if we just open our eyes to see it," Washek said via the hospital's Facebook post.

"Sometimes we only see the bad side in healthcare. We don't get to see the good that we do sometimes," she tol DNAinfo Chicago.