There are two types of people in the world: Those of us who can buy a little novelty license plate with our name on it, and those of us who are f*cked.

My sisters always found their names whenever we visited a tourist gift shop. Mt. Rushmore mug personalized with "Lisa"? Here you go! Winnipeg Zoo magnet reading "Amy"? Why, sure! A piece of sh*t anything from anywhere that says "Wendi"? Fat chance, freakface. Take this Navajo Nation ballpoint pen that says "Wanda," close enough, and go write an angry note to your parents about their late '60s journey into creative spelling.

And yet I spun those tall racks of personalized license plates with fresh hope every time we saw one. I'd quickly whisk A-F aside, make my way past G-M and N-T, then I'd catch my breath in anticipation when the column came to a shuddering stop at U-Z. U-Z: The unsexiest part of the alphabet. If the alphabet were a beauty pageant, U-Z would be the pudgy girls with adolescent mustaches, pit stains and cankles who get blamed for clogging the toilet in the dressing room. Sure, we may have a few "Ursulas" and "Yolandas" in our zoo crew, and maybe a "Zoe" here or there, but let's be serious. Little baby "Walburga" ain't gonna be no prima ballerina.

Once at the U-Z column, I'd immediately narrow my eyes and get into a crouch position. Because much like catfish, sea cucumbers and stock market speculators, "W" names are always the bottom feeders. I'd quickly scan the row of offerings, hoping against hope that I'd finally find what I'd been searching for my entire childhood. The one item that would finally complete me and give my bedroom door some much needed pizzazz. "There's your name!" one of my sisters would yelp. "I see your name!" My heart would start to explode with joy, but then it would screech to a halt because my head knew what would come next. My head knew what always came next.

My parents would see me moping in the third row of the station wagon as we pulled away from the latest tourist trap, and roll their eyes and tell me it wasn't so bad. "But it is so bad," I'd think while drowning my sorrows in a bootlegged Jackie Collins novel. "It's the worst. And when I turn 18, I'm totally changing my name to Olivia Newton-John Willson. Just you wait."

Know what's pathetic and doesn't work? Making a "WENDI" license plate out of notebook paper and taping it to your Huffy bike.

Know what's also pathetic and also doesn't work, and gets you stuck at home watching The Love Boat on Saturday night with your parents instead of going to your friend's slumber party? Stealing your sister's novelty license plate and writing WENDI on the back of it with nail polish, then taping it to your Huffy bike and losing it in a gutter.

When my boys were born, I didn't choose their names based on whether or not they'd be easily found on gift shop crap. However, I didn't not not choose their names based on that, either. But while one would think SAM and JACK are personalized novelty Nirvana, while one would think we'd be practically choking on magnets and jackknifes and giant, hilarious pencils, one would be wrong. Because guess who's a complete asshole? The people who decide on the 100 or so names that make the souvenir cut, that's who.

Question: How many DESTINYs and DEVONs do you know?

Answer: Zero. Nobody knows a Destiny or a Devon. And if you do, I don't believe you.

Still, every single gift shop rack of name items has so many Destinys and Devons, you'd think that they were Jesus' parents instead of Mary and Joseph. Oh, Virgin Destiny, we pray to you. The stores also have plenty of things that say TRINITY, TRENTON and LARRY on them. Are there currently a bunch of kids named TRINITY running around at recess? Are there toddlers named LARRY buying personalized flashlights? I don't know, I don't know, I DON'T KNOW.

Of course, now you can go on the Internet and personalize anything. And I do mean anything, Etsy feminine hygiene crafters. FYI: If you're buying a monogrammed tampon, you may have a slight narcissism problem, friend. But being able to customize everything is good news considering that we now live in a time when there are approximately 5,302 spellings of "Kayleigh," and kindergartners are named "Justice" and "Pharaoh." Just last week I met a middle schooler named "Trivet" -- pronounced "tree-vay." Honestly, spelling "Wendy" with an "i" is nothing compared to spelling "Jackson" with two A's and two X's, so my parents were obviously way ahead of their time. I should probably consider dropping the grudge at some point.

Still, there's just something cool about walking into a gift shop and finding your name on something when you're a kid. That's why I recently tried to buy my son Jack a Texas Ranger badge from the Texas State Capitol gift shop. I spun the rack past A-F, stopped on G-M and eagerly looked. I knew I didn't need to crouch because the J's, unlike the W's, are always at eye level. The J's are the grand prize winners of the alphabet beauty pageant. Just ask any Jennifer. I'm sure there's one near you right now.

But not only was there no Jack badge, there wasn't even a space for Jack, even though it's been one of the top 50 names for the past 100 years. There was JEREMIAH. There was JARED. There was JONAH. But no JACK. My heart hurt for him, and not wanting my child to go through the pain and suffering I had for most of my childhood, I knew I needed to comfort him. So I bent down, looked him in the eyes, and told him to cheer up because it wasn't that big a deal. Not finding your name isn't something worth getting upset over for even a second. It just isn't.

"Besides," I said while we walked up to the register to buy his personalized badge, "I really think you'll like your new name, don't you, Devon? Go tell your brother Destiny the news."

Their bedroom doors have so much more pizzazz now. 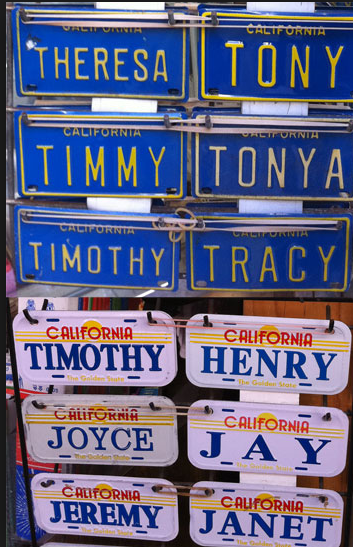