So, my friends, here is the latest. For the next two weeks, I am off to France for a press trip, organized by the Poitou-Charentes region in Western France. How can I say no? The region is famous for its ancient Roman history, medieval architecture, plenty of small museums, and beautiful landscapes - including the area known as Cognac. After that, I am off for a few days in Paris, to see the new Louis Vuitton museum built by Frank Gehry, and the renovated and expanded Picasso museum. So, stay tuned.

In the meantime, why don't you have some art adventures here in Los Angeles, in the heart of Downtown? God knows how many years it's been since, instead of driving, I simply strolled down Figueroa and Flower near 5th - just a stone's throw from LA Central Library. 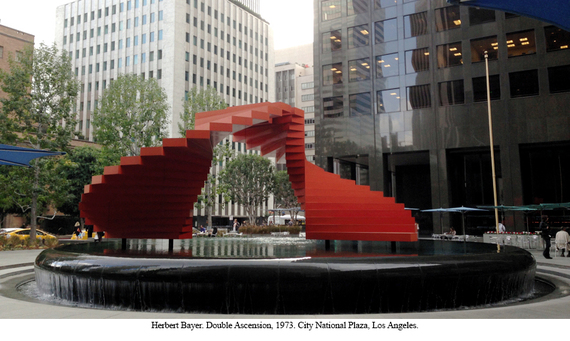 City National Plaza (previously known as ARCO Plaza) is blessed with one of the most beautiful public artworks in LA -an imposing, monumental fountain sculpture by Austrian-born artist Herbert Bayer (1900-1985) titled "Double Ascension." Its twisted red metal steps, going up and down, evoke for me the dance glamour of Busby Berkeley's musicals. Hey, aren't we in Hollywood after all? And by the way, the original and rather enticing title that Bayer gave to the sculpture was "Stairway to Nowhere," but silly corporate executives rejected it, saying that it did not properly reflect company goals. 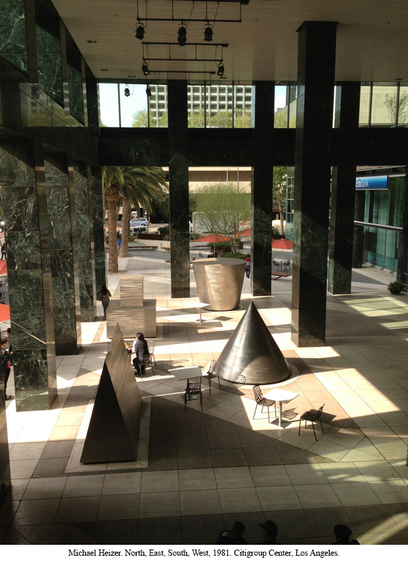 As a result, when you stroll through the public spaces of Citigroup Center -- on its plaza levels and garden terraces above -- you will discover a hidden-in-plain-sight treasure trove of monumental works by the who's who of contemporary American art. 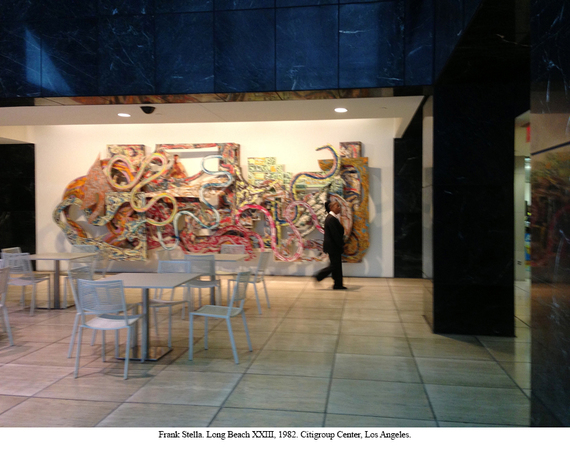 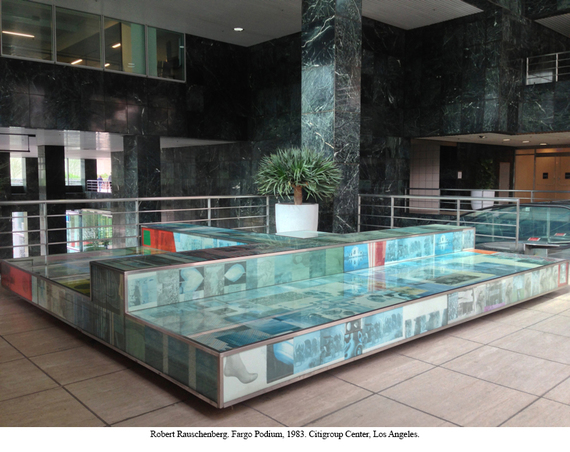 At the very end of the plaza hangs a huge wall sculpture by Frank Stella, which is easy to miss as it is tucked away deep behind Heizer's sculptures. Made out of brightly painted honeycombed aluminum and fiberglass panels, Stella's work recalls the tangled web of LA's winding roads and freeways. 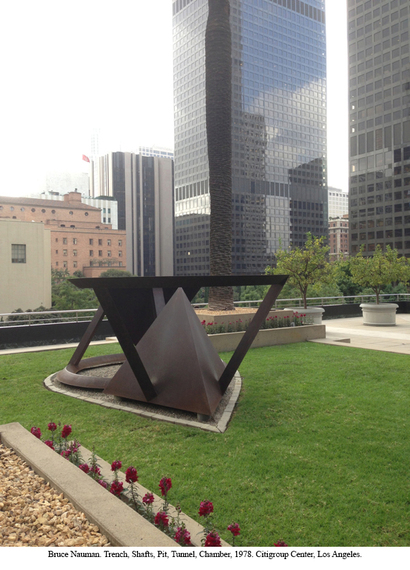 Going one level above the plaza, I rediscovered a large horizontal sculpture by Robert Rauschenberg, with his trademark collage of images of newspapers, maps, paintings, fabrics, and books -all tacked behind a thick layer of plastic. If you were standing in front of this sculpture in a museum, you wouldn't dare touch it. But here, on the terrace, people comfortably rest their behinds on this great work of art, which is probably exactly how Rauschenberg wanted it to be. 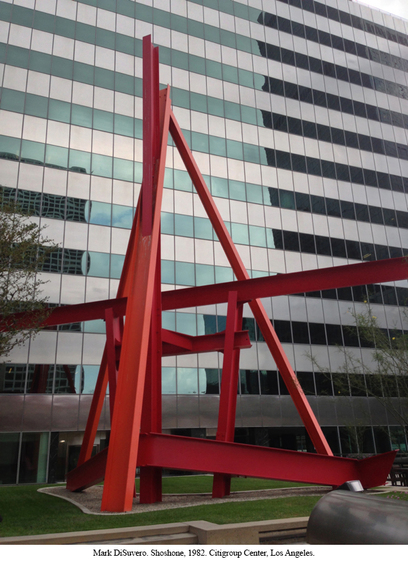 It takes some ingenuity to find your way to one of the upper garden terraces, but if you succeed, you will be rewarded by the sight of the 45-foot high metal sculpture by Mark DiSuvero, weighing 25 tons and constructed from 13 I-beams painted bright, vivid red. Even when you're driving through this intersection off Flower and 5th, you can easily catch a glimpse of this towering DiSuvero sculpture, which to me looks like an abstract dream of a Christmas tree.

So I hope that you, adventurous art lovers, will treat yourself to the pleasure of seeing this museum-quality public art collection in the very heart of LA.