Yesterday, the USDA reported that the average farm price for corn in the 2012/2013 season is projected to rise sharply from $4.20-$5.00 a bushel to $5.40-$6.40 due to the extreme heat and drought across corn country that has been wreaking havoc on crop production. For Americans, it means we can expect to see higher food prices coming to a store near you. Higher prices won't just be on ears of corn, but on all other products that depend on corn. The price of meat, milk, cereal, candy, and other food will all be impacted.

Meanwhile, in the Sahel region of West Africa, as many as 17 million people are now at risk in a food crisis that stems from crop failure, drought and high food prices. In The Gambia alone, skyrocketing food prices mean an estimated 700,000 people are going hungry. The U.S. is the largest exporter of corn in the world, but the latest USDA estimates are that we will be exporting 300 million fewer bushels due to tight supply and higher prices.

What is the hidden ingredient in rising corn prices?

In a nutshell, the answer is corn ethanol. While biofuels are not the only thing driving up corn prices, here's why it is an important factor:

Due to a cocktail of government incentives, we are already diverting almost half of our corn crop to ethanol for our cars.

This year the U.S. will turn five billion bushels of corn into ethanol. That's enough food to feed 412 million people for an entire year.

Earlier this year, the USDA boasted the largest corn planting in history and corn producers thought they might be able to meet rising corn demand for food, feed and fuel with the bumper crop. Yet the long and hot summer in the United States, with record-breaking temperatures and extended periods of drought, has been burning up the corn in the Midwest.

Basic economic principles show us that, inevitably, when supply diminishes and demand rises, prices will increase. The last several years have shown that extreme weather events ranging from floods to droughts to tornadoes have dampened supply. Climate change is only likely to make this erratic weather the new norm. Good policy shouldn't depend on prayers for good weather. Instead, to relieve the supply and demand challenge, we should ease pressure on our corn crop and remove any artificial government mandates for corn ethanol. 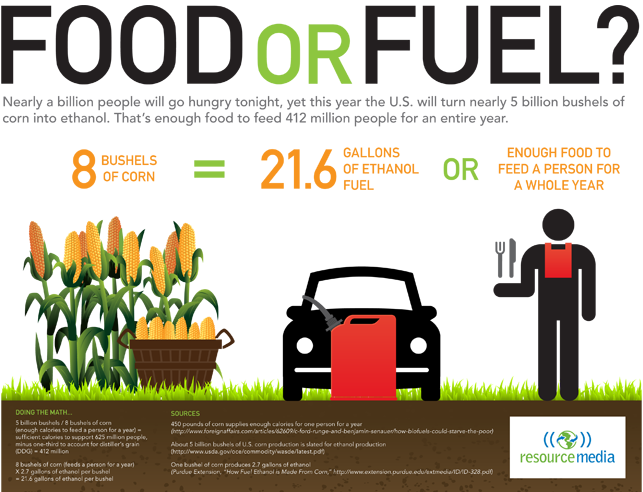 Proponents of ethanol often argue that crops used for fuel are different than the ones we eat. Let's not get confused here. Regardless of the type of corn crop that is grown, the common denominator remains the need for land and an adequate climate to grow crops. The problem is the diversion of land to fuel crops from food crops. It is not the farmer's fault. They grow what they can sell in the market for a good price -- and both producers and consumers deserve fair prices. But government mandates have created the market for ethanol encouraging producers to focus on feed corn for ethanol instead of for animal consumption -- which ultimately becomes food in the form of meat, dairy and eggs. In sum, corn ethanol means more demand on the land and less land for food.

It's not just a theoretical concern either. The U.S. controls more than half of the corn export market, so the tight corn supply and growing demand has been pushing up prices at home and even more significantly abroad. ActionAid's recent report "Biofueling Hunger" shows how the diversion of food to fuel has caused an increase in global food prices by using the example of Mexico. The cost of corn tortillas, a staple food in the country, has risen nearly 70 percent as a direct result of ethanol mandates in the United States. Five million children did not have enough to eat in Mexico last year.

We can't control the weather, but we can control the demand on corn. It's time for the United States to either drop government incentives for corn ethanol or at least make the mandate more flexible so that in times of tight supply we are able to waive down the artificial demand.

Watch ActionAid's video "What's Lurking in Your Taco" to find out more about the hidden ingredient in rising food prices. You can take action to prevent this by sharing this video and graphic on Facebook and Twitter to make it known that biofuels are not a sustainable solution to the world's energy problems.