If you've ever wanted to be a real-life Lara Croft or Indiana Jones, there are a few places you can start looking today.

With so many legends of lost riches out there, it's easy to think that treasure could be found just about anywhere. Consult a treasure seeking forum for just a few moments and you'll realize that even right now, sweet loot may be hiding somewhere just a short trip away.

It's impossible to know if a treasure legend is true until the riches are actually found, but below is a roundup of troves that actually seem worth hunting for.

After being diagnosed with cancer in 1988, millionaire art collector Forrest Fenn decided that before he died, he'd like to hide a treasure chest containing some of his most valuable possessions. Fenn ended up surviving the cancer, however, and in 2010 finally hid his treasure somewhere in the Rocky Mountains. Although the clues keep adding up (Fenn has written two books leading would-be seekers to the hiding place), and the treasure is supposedly worth millions, to this day it has yet to be found.

The exact contents of the treasure are unknown, but a friend of Fenn's who helped assemble the prize told Vice, "When you open the lid... it was all thrown in willy-nilly, just these huge heaps of massive gold coins, gold nuggets the size of hens eggs, jewels, gold bracelets, gold ornaments from South America, and everything glittering in the light.” That sounds pretty shiny!

Treasure hunters have gone to great lengths to discover the treasure. Some have resorted to stalking Fenn, while others have mistakenly dug up areas in Central Park and even the graves of Fenn's parents and brother. If you'd like to join the hunt, a good place to start is Dal Neitzel's blog about the treasure, this recent profile of Fenn by HuffPost blogger Margie Goldsmith, or just check out the Facebook page.

Off the shores of Nova Scotia is Oak Island, a place where unimaginable riches (or absolutely nothing) can supposedly be found at the bottom of a money pit that has eluded treasure seekers for centuries. Originally, the money pit was found in 1795 by a teenager named Daniel McGinnis who claimed he saw mysterious lights coming from the island, and upon investigating, found a small circular hole that seemed worth digging into. As this was the golden age of piracy, McGinnis and his friends thought there might be recently buried treasure in the pit. The boys made many trips to the site, and in their digging found pickaxe markings and wooden platforms that served as signs that this was in fact a manmade hole where treasure might be found.

In the end, however, they found nothing of value, but as the legend grew, more and more people decided to try their luck. Exciting signs of treasure kept being unearthed, such as the presence of coconut shells, which are not native to the region. Finally, at a depth of 90 feet, a mysterious stone was discovered with symbols that to this day have not been definitively decoded. This finding set off the insane pursuits of wealth at the pit for centuries to come.

Various treasure hunting companies have tried their luck, sinking millions of dollars and losing six human lives. Unfortunately, as the deeper holes were dug, the pit continued to fill up with water, requiring more and more powerful machines to drain it. And as company after company dug different holes to avoid the water, only to encounter financial troubles, the spot of the supposed original money pit has become lost. These people aren't completely crazy: Traces of gold have been found and other treasures have allegedly been discovered as well, though the finders have supposedly kept them hidden.

Theories of what's actually hidden in the pit range from the pretty standard "pirate's treasure," to the Holy Grail itself. Regardless, people can't seem to give up on the legend. President Franklin Delano Roosevelt even pursued the treasure, working at the site in his late-20s. To this day, people are searching for treasure at the money pit, and this year, The History Channel began airing a reality show about the treasure-seekers of Oak Island. 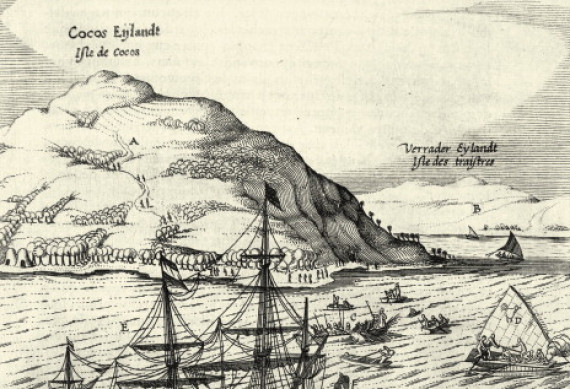 The Spanish accumulated a great deal of wealth after defeating the Incan empire in the 16th century. Much of that wealth was stored in Lima up until 1820, when a revolt forced the Spanish to try and save their treasure by moving it out of the city. British Captain William Thompson and his ship, the Mary Dear, were put in charge of taking the treasure out of the city and sailing around the area until the revolt died down. Stricken with temptation, however, Thompson and his crew killed the Spanish guards and allegedly buried the entire haul. The Mary Dear was later captured and the entire crew was executed, except for Thompson and his first mate, who agreed to show the Spanish where they'd buried the loot. They directed the Spanish to Cocos Island, near present day Costa Rica, but when they reached the shore the two spared pirates ran into the jungle, never to be seen again.

So many questions remain: Did Thompson and his first mate end up digging up the treasure and carrying on with their lives once the Spanish gave up looking for them? Is Cocos Island even where they buried the treasure, or just a place they knew they could hide? What was the makeup of this treasure haul? The last question can be at least partially answered. Spanish officials at the time estimated the treasure was worth somewhere between $12 and $60 million, and an "original inventory" included a "solid-gold, gem-encrusted, life-size image of the Virgin Mary," along with "113 gold religious statues... 200 chests of jewels; 273 swords with jeweled hilts; 1,000 diamonds; solid gold crowns; 150 chalices; and hundreds of gold and silver bars."

Today the treasure is estimated to be valued somewhere around $200 million and its current whereabouts continue to remain hidden. 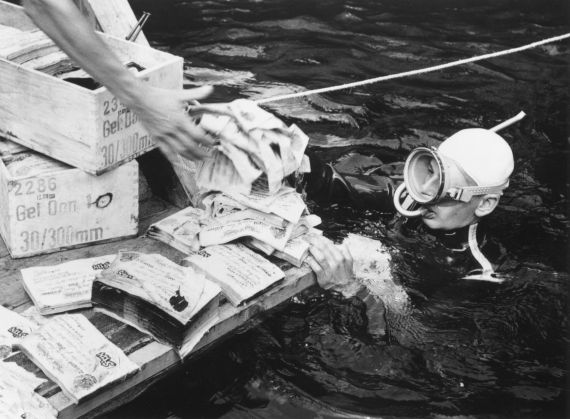 In the last few months of World War II, Nazis sunk containers and various other objects into Lake Toplitz for still not entirely known reasons. A few of these containers have been recovered, with millions of dollars worth of fake currency of Allied nations inside. Apparently, the Nazis wanted to destroy Allied economies with inflation in a plan called “Operation Bernhard." Along with the containers, missiles, a printing press and even a box full of beer bottles (a practical joke) have been found in the various expeditions over the last century, which have claimed multiple divers' lives.

Unfortunately, Lake Toplitz has dangerous sunken logs that lie near the supposed location of the treasure, making visibility scarce and increasing the threat of drowning while trapped under one of these logs. Divers who have made it down claim to have seen a sunken plane, but what keeps interest so high in the lake is that many believe the Nazis sunk millions worth of gold, diamonds and other treasures, possibly even including art wonders such as the now-legendary Amber Room panels from the 18th century.

Perhaps this wouldn't exactly be the best treasure to hunt for. As already mentioned, the search could get very dangerous but there's also environmental concerns. In 2009, Austrian nature experts sought an almost century-long ban on diving for the buried treasures, though it's unclear if people are still searching today. 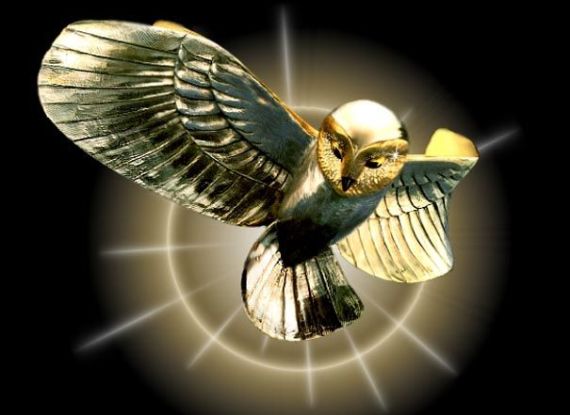 In April 1993, someone going by the pseudonym "Max Valentin" supposedly hid a golden owl in the French countryside, promising to offer 1 million francs to whoever found it. Valentin gave 11 clues as to the owl's whereabouts, but it still hasn't been found.

Over the years, a few especially crazy treasure hunters have emerged, busting up concrete and burning down a chapel in the pursuit of the golden owl. Sadly, Valentin died in 2009 and it's unclear whether the owl is still definitively hidden, but during an interview in 1997, Valentin responded to treasure hunters' inquiries and assured those still looking that he had periodically checked on the whereabouts of the owl to make sure it was still there. Apparently, someone had in fact come close, as Valentin saw disturbed ground near the true sight, but as of now, that appears to be the closest anyone has come.

Thousands of years ago, long before the Spanish conquistadors arrived in modern day Colombia to discover this legend for themselves, the leader of the Muisca tribe was said to cover himself in gold dust, float into Lake Guatavita, and toss gold and other treasures into the waters to honor the gods. While this legend may be ancient, it appears to be the real deal.

Located just a couple hours north of Colombia's capitol city of Bogotá, Lake Guatavita is believed to be the site of the El Dorado legend, with actual gold being recovered from the lake since the Spanish arrival in 1536. "El Dorado" means "golden one" in Spanish, but originally the legend may have gone by other names such as "El Hombre Dorado" (the golden man), "El Indio Dorado" (the golden native) and "El Rey Dorado" (the golden king).

Multiple treasure hunts have taken place at the lake since the Spaniards' first attempt to drain the water using gourds in 1545, which only lowered the water level slightly, but did help recover quite a bit of gold. Since then, multiple draining attempts have taken place (with one attempt killing hundreds of workmen), the most recent attempt taking place in 1911. In this try, a company succeeded in draining the entire lake, but the mud at the bottom hardened over, supposedly trapping the treasure under an impenetrable crust. Nowadays, even swimming in the lake is banned by the Colombian government, but apparently there aren't too many people making treasure hunting trips to the area anyway. As of 2002, a report stated that "A lonely ranger with a shotgun [was] the only guardian of the mystery of El Dorado."

If you'd like to see a bit of the El Dorado legend for yourself, you can visit the Gold Museum in Bogotá, which features a few of the treasures found in the lake along with the "The Muisca Raft", which was made sometime between 1500 and 1200 BC and depicts the golden king preparing to offer tribute to the gods.

12 Lost Treasures You Can Still Look For