Although you wouldn't know it from watching developments in Syria or Egypt, one of the biggest difficulties in reporting and commenting on authoritarian regimes these days is that many have terrific "democratic" window dressing, designed by western-educated consultants and apologists, some very slick, some sharp-tongued, who easily gull or cow American innocents abroad.

One can't show this decisively in a newspaper column like mine in this week's New York Times Sunday Review section. It argues, in 1,200 words, that some American universities are selling out liberal education's core values in collaborating with the authoritarian regimes to set up whole campuses on their turf.

Fortunately, openDemocracy.net, one of Britain's most thoughtful, respected websites, has just posted additional information and arguments about these university-regime collaborations and their implications for U.S. foreign policy, in a 4,700-word opus I wrote a few weeks ago.

The most obvious problem with these collaborations is authoritarian regimes themselves: Decades ago, anyone reading the Soviet constitution might have thought the USSR a democratic paradise, and you'll be amazed to see how, for example, Singapore's seemingly meticulous legal system asphyxiates freedoms of the press and political expression as Americans look the other way.

And that points us to the less-obvious but also important problem: Many Americans who visit and make deals with such countries almost ask to be fooled.

As Malcolm Muggeridge noted about some American idealists visiting the Soviet Union in the 1930s, "Their delight in all they saw and were told... constitute unquestionable wonders of the age. There were earnest advocates of proportional representation who eagerly assented when the necessity for a Dictatorship of the Proletariat was explained to them, earnest clergymen who walked reverently through anti-God museums... earnest pacifists who watched delightedly tanks rattle across Red Square..."

It's happening again now, as globe trotting university presidents and trustees who are carrying liberal education's prestige and skill sets to iron-fisted oligarchies decide -- as Lincoln Steffens did of the early Soviet Union -- that they've "seen the Future, and it works" in these apparently orderly, energetic, prospering societies.

Singapore, the United Arab Emirates, Kazakhstan, and today's China aren't as totalitarian as the USSR was, although Kazakhstan is still ruled by the autocrat who ran it in its last years as a Soviet Republic. As such rulers welcome corporate capitalism, they may seed some elements of ordered, liberal democracy in ways they don't intend.

But they're also seeding something ominous: It's becoming even harder, not easier, for investigative reporters, let alone observers like me, to document chilling abuses that are initiated only with arched eyebrows and significant silences at the top and are committed by seemingly ordinary "citizens" or decorously legalistic functionaries, including judges, while the true progenitors of what is becoming a pervasive fear and self-censorship remain smiling and "clean."

"Fear leaves no fingerprints," as William Dobson puts it in The Dictator's Learning Curve, which unpacks some of these deft, unspoken connections really well. Surveillance and seduction are as effective at silencing people as are truncheons and prison cells. But credulous American university visitors barely notice because they're being welcomed into carefully manicured holding pens.

It's devilishly hard to track arrangements under which China, Kazakhstan, Abu Dhabi, and Singapore are "buying" liberal education's prestige by bearing all or most costs of constructing the campuses, paying faculty salaries, and subsidizing students' tuition to lure American university leaders who, thinking like the business corporations on whose boards they also serve, are eager to expand their colleges' "brand names" and shares of burgeoning new markets among Asian middle classes.

For example, the contract between Yale and Singapore for the brand-new Yale-National University of Singapore College that opened last month remains secret, despite repeated Yale College Faculty demands that it be opened. 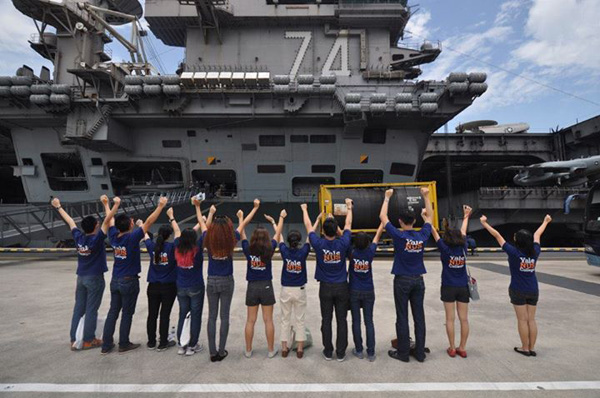 Also secret are many of the funding arrangements. "Yale has had no part in financing Yale-NUS, which is largely funded by the Singaporean government, in addition to private contributions," notes Yale undergraduate Cindi Hwang in "Exporting the Ivory Tower" on the website Foreign Policy in Focus, but not until Kenneth Jeyaretnam, the brave secretary general of Singapore's oft-harrassed Reform Party, read the official Budget documents for 2013, did anyone tell me that the Development Expenditure for the National University of Singapore had shot up from S$19 million [Singapore dollars] in 2011 to S$54 million in 2012 and estimated to be S$43 million in 2013.

"That could be the cost of construction of the Yale-NUS campus. So, close to S$100 million in capital expenditure likely was spent on building the new campus," notes Jeyaretnam, who holds double honors in economics from Cambridge University and ran a successful hedge fund for several years. But none of what he has observed has been officially disclosed or discovered by the country's cowed or government-controlled press.

Nor has anyone dug behind my own report here a year ago that a German university vice-chancellor had told me how he thinks "there's $300 million for Yale in this deal." The post set off furious rebukes from the Singapore press and the Yale public information office, but they never disproved the suggestion.

Nor, in regimes whose official reports never clarify what's done in tangles of money laundering and mutual back-scratching can anyone tell the public whether Singapore was behind one of the top 10 contributors -- "Anonymous, for International Studies" -- to Yale's recent $4 billion capital fund-raising campaign, led by Yale trustee G. Leonard Baker, a long-time investor and advisor in Singapore's sovereign wealth fund and a big moral booster of the Yale-NUS project.

One certainly can't show things like this in an op-ed piece, which must draw as deftly as it can on reporting that others (including the author) have done at length elsewhere. That's why, if you want to assess the dangers in American universities' collaborations with authoritarian regimes, I hope you'll read the revelatory openDemocracy report as well as the Times column.