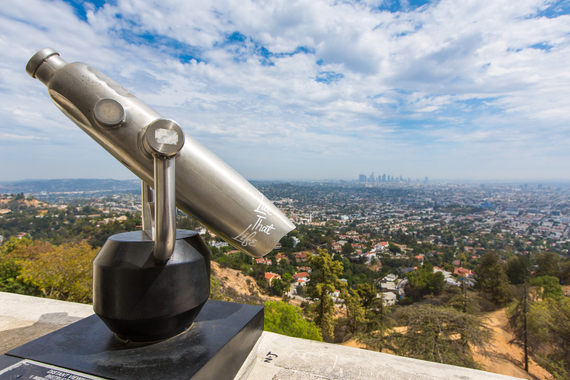 Elevate your experience in Los Angeles-- literally. When the city's traffic and noise starts wearing you down, it's time to head upwards. Here are a few places where you can put the city at your feet:

SpySpace
If you're serious about getting above it all, the first place to go is the U.S. Bank Tower in downtown LA. Slated for completion in late June, this 1,000-foot-tall building is now the tallest west of the Mississippi. Skyspace, an open-air observation area, spans the 69th and 70th floors of this downtown building. The 360-degree view means you can practically see all of LA, and, on a clear day, even beyond to Catalina Island. And for a view with a side shot of adrenaline, book time on the glass Skyslide, which wraps around the outside of the building delivering slidees from the 70th floor to the 69th in seconds.

Hike the Hill to Griffith Observatory
Do like the locals do and hike up Mount Hollywood to the Griffith Observatory. As soon as you get up there you will recognize it from the many movies, including Rebel Without A Cause, which were filmed here. Whether you take the easier (and shorter) 2-mile hike or a longer route, which can span more than 5 miles, you will be rewarded with views of the city that unfurls beneath you. This also happens to be one of the best places in LA to snap photos of the Hollywood sign. Not only is the park free but so too is the museum, which has science exhibits and a planetarium. Do an evening hike and watch LA lights twinkle beneath you before taking your spot at one of the Observatory's massive telescopes for a look at the sky above.

Yoga on the Rooftop
Luxury and yoga can be combined on the top of the Four Seasons Hotel Los Angeles at Beverly Hills. If you're one of the lucky ones who have booked a room at this oasis you can arrange a group yoga class on the rooftop helipad. The hotel's location means there are unobstructed views of the Hollywood sign, downtown LA and the mountains. Here you can downward dog with Rainbeau Mars, a wellness expert known as yogi to the stars.

Helicopter Ride
It's worth the short trek down the coast to Long Beach to book a 45-minute flight called Surf & Turf over Los Angeles with Anthelion Helicopters. Friendly, down-to-earth pilots shuttle you over the vast swaths of LA above the complicated and crowded freeways. Small, four-person helicopters navigate the sky so you can capture Instagram-worthy shots of the Staples Center and USC, as well as sneak a peek behind the gates at the lush gardens in Beverly Hill and the fortressed homes of movie stars. Plus, if you time it right, you'll have a bird's-eye view of beluga whales cresting the Pacific Ocean as they migrate along the coast.

Rooftop Garden
Restoration Hardware's showroom on Melrose Place in the burgeoning West Hollywood design district might seem an unlikely place for a rooftop garden, but it's one of LA's hidden treasures. From inside the store take the elevator to the third floor to soak in the serenity above one of the city's busiest neighborhoods. Amid the olive trees and boxwoods sink into one of the lounge-y sofas in front of a fire pit or beneath a loggia and soak in the view of the Hollywood Hills. In a neighborhood with limited outdoor space, the bluestone pavers, courtyards and terraces flanked with knee-high lanterns lure locals to what's becoming an elevated community backyard.

More:
travellaHollywood
Newsletter Sign Up
An essential daily guide to achieving the good life
Subscribe to our lifestyle email.
Successfully Subscribed!
Realness delivered to your inbox