NEW YORK — The ribbon was cut Tuesday on the long-awaited second section of the High Line, revealing a lush green lawn, prime lounging spots and a less-industrial feel than the original stretch of the famous park built on abandoned railroad tracks 30 feet above ground.

The new section ends at 30th Street, adding 10 blocks and doubling the length to one mile. The first segment opened in June 2009 and runs from Gansevoort Street to 20th Street.

The park meandering through some of Manhattan's hippest `hoods is already a superstar attraction with 2 million visitors a year. If you plan to be among them, here are some High Line secrets and unique features to look for, along with some history.

HISTORY: Freight traffic in the area began on street level in 1847, delivering dairy, meat and produce to factories and packing plants on the West Side near the Hudson River. The trains crashed so often with traffic – first carriages, then cars – that 10th Avenue was dubbed "Death Avenue." Signalmen on horses waving red flags, dubbed West Side Cowboys, weren't much help, so the tracks were elevated in 1934.

In the 1950s and `60s, interstate trucking diminished the need for the High Line and local manufacturing slowly vanished, leaving huge brick buildings to decay amid crime, vacant lots and auto repair shops.

The last train went through in 1980, carrying three carloads of frozen turkeys. The High Line was left to the weeds until a massive rezoning effort and the nonprofit Friends of the High Line, which runs the park, turned things around. The city, which owns the property, invested $112.2 million of the $153 million cost, but Mayor Michael Bloomberg said the park has since generated $2 billion in private investment with big names like fashion's Diane von Furstenberg and architect Frank Gehry among the pioneers. Nearby neighborhoods have been revitalized; art galleries, boutiques, eateries and hotels abound.

RAILROAD TRACKS: Hundreds of feet of actual track run the entire length of the High Line. The track was carefully marked as it was pulled up for park construction so it could be placed in its original spots.

Some of the track sits above the pavement, with flowers poking through. Other pieces are embedded in the park's concrete planked walkway that with gently sloping benches and narrow water fountains was designed to evoke High Line track.

MEATPACKING: At 13th Street, look west for a line of large metal brackets on top of an adjacent building. The brackets once anchored meat hooks along one of the High Line's widest sections, where trains pulled off on a spur to unload.

Once home to more than 250 slaughterhouses, the area still houses meatpacking, including a co-op of seven companies that just signed a 20-year lease extension with the city, the mayor's office said.

THE SEX HOTEL: OK, it's not really called that. It's The Standard at 13th Street, a 337-room, 18-floor hotel that is the only commercial building straddling the High Line. With floor-to-ceiling windows overlooking the park, it became famous for guests engaging in hanky-panky in full view of the High Line baby stroller crowd soon after the park opened.

Word is the hotel now has cards in each room asking guests to be more discreet.

Look for the real sex hotel from the High Line on 10th Avenue between 13th and 14th streets. It's the red brick Liberty Inn, a former boarding house for sailors, Prohibition-era speakeasy and go-go bar built in 1908. The Liberty calls itself "Your Rendezvous for Romance" and rents by the hour.

"It's an old-fashioned, hot sheets hotel," said a not-so-bothered Joshua David, co-founder of Friends of the High Line.

THE GOOGLE BRIDGE: When Google moved into space once used by Nabisco, its workers took to using an ornate steel bridge on 15th Street that connects the upper floors of two buildings. Google has since bought a 3 million-square-foot building a block away.

"This is where the young people want to come. That's why Google is here," Bloomberg said.

GRAFFITI AND BILLBOARDS: Amid the fancy new buildings around the High Line are lots of funky old ones, some of which have some cool tags and faded company names. The anonymous Neck Face graffiti artist left a yellow snake on the bottom of the still-wild third section of the High Line. Look behind the elevator at 30th Street.

The second section's "viewing spur" pays unlikely homage to largely reviled billboards stuck all over the High Line during its decline. Here you can sit in front of a steel frame looking out on 10th Avenue at 26th Street – and an auto shop. The frame is softly illuminated at night.

PEOPLE: The High Line's not all about the industrial past. You can practically see into von Furstenberg's glass penthouse dome in the shape of a diamond above her 14th Street headquarters.

The new section of the park has a residential feel as well. Marianne Boesky put up driftwood sticks along her balcony on top of her 10,000-square-foot gallery at 24th Street, like a picket fence. She has some grapevines, too.

Other neighbors include Patty Heffley, who with friends serenaded High Liners in the early months from her fourth-floor fire escape at 20th Street, where the first section ended and a locked metal gate rattled when anybody touched it. She still lives there in her $841-a-month rental, with an "Area 51" license plate in the window, but building regulations shut down her nightly Renegade Cabaret shows.

"Go home, we would say. We sometimes made jokes to people as they snapped our photos like circus animals," Heffley, 57, a former punk rock photographer, said Monday. "It'll be interesting to see what happens now."

VIEWS: From the High Line you can see the Statue of Liberty, the Empire State Building and the Chrysler Building. You might even catch a high flyer through the screen windows of the Trapeze School New York at 30th Street.

The undulating steel structure at 23rd Street is Los Angeles architect Neil Denari's HL23, a 14-story condo tower with a relatively tiny footprint that broadens as it rises, leaning 10 feet over the High Line.

In the winter months, when the trees drop their leaves, both the East River and the Hudson are visible on the High Line at 23rd Street. David said the same is true at 14th Street.

ART INSTALLATIONS: You'll experience Julianne Swartz's "Digital Empathy" project at 11 locations throughout the park, including water fountains, bathroom sinks and elevators. A computer-generated voice will recite poetry and messages of concern, support and love like "You are a winner." The project will be there through spring 2012.

A plaza at the High Line's 30th Street terminus hosts Rainbow City, a collection of colorful striped inflatable sculptures, through the summer. The urban playground for kids and adults looks like something out of Dr. Seuss; it's sponsored by AOL and was created by an art collective called Friends With You.

NATURE: American Holly trees, pussy willows, magnolia and winterberry bushes are High Line newcomers in the second section. So is reclaimed teak seating that includes the curved, block-long radial bench starting at 29th Street. The teak comes from industrial and agricultural buildings that were demolished in southeast Asia.

The new section also has 4,900 square feet of green lawn from 22nd to 23rd streets. And yes, you can sit on it. That's the point. The lawn is already beautiful and inviting, but some of the other new plantings, like the Chelsea Thicket that serves as a segue from the first section, have some growing to do.

THE FUTURE: An exclusive private school, Avenues: The World School, is being built at 25th Street in a 215,000-square-foot building adjacent to the High Line. In 2015, the Whitney Museum of American Art plans to open a museum near the Gansevoort Street entrance.

Visible beyond the end of the second section is a third chunk of High Line track that remains untended. Friends of the High Line hope that it, too, will one day be transformed to become part of the park.

VISITOR INFO: The High Line is gloriously free, and with the opening of the new section, evening hours will run to 11 p.m. all summer. (In winter, it closes at 8 p.m.) The High Line opens at 7 a.m. year-round. David suggests early morning visits as the best way to discover its secrets without the crowds. 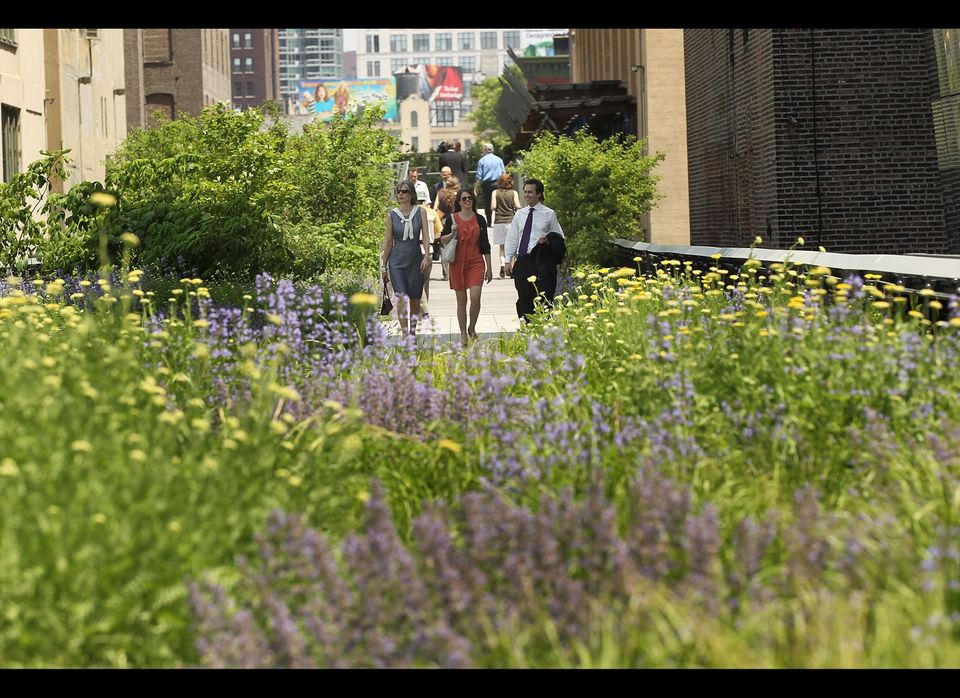 1 / 13
Second Section Of New York City's Elevated "Highline" Park Opens
NEW YORK, NY - JUNE 07: People walk along a path on the newly-opened second section of the High Line park in on June 7, 2011 in New York City. The new section concludes at 30th Street and will add 10 blocks, doubling the length of the High Line to one mile. The original section opened in June 2009 and runs from Gansevoort Street to 20th Street. The High Line was formerly an elevated railway 30 feet above the city's West Side that was built in 1934 for freight trains hauling dairy products, produce and meats and had become dilapidated after the rail closed in 1980. (Photo by Spencer Platt/Getty Images)
Getty