So I kind of can't believe that today's your first day of high school. I feel old -- and not in a "I-watched-the-VMAs-last-weekend-and-have-no-idea-who-these-people-are" way (because I do, in fact, know who all those people are. I'm cool. See? SEE?).

High school is different now. I remember when I used to have to wait in line to use the payphone to call mom to pick me up after school. You have never used a payphone in your life. I also didn't get a flip phone until my 16th birthday, so you already have a leg up on me with your iPhone.

Anyway, I'm not here to lament how high school is so much better now than when I was in high school (although I did have The OC and you do not, so there's that) because in many ways, nothing has changed at all. Today, you're starting a new school -- the very same one I went to -- and while I know that you've got this, I want to impart a few words of wisdom as you venture off into the exhilarating abyss known as high school.

1. Listen to The Smiths.
This is important. Morrissey once sang, "It takes guts to be gentle and kind." It's so much easier to ignore the kids who are "weird" or "different." But you're better than that. So be kinder than necessary and don't laugh when those jokes aren't actually funny.

Also, just listen to The Smiths in general.

2. Look up from your phone.
As a person who (literally) sleeps with her iPhone next to her, I know I'm not one to talk, but hear me out. 1.) It'll reassure the parentals that you are not destroying your social skills and 2.) there's actual stuff going on. I know Angry Birds is addicting, but when you're looking down all the time, you could be missing out on important conversations. Yes, the world is virtually at your fingertips, but don't forget to look up every once in a while to see the world that's around you.

3. Mom's a person, too. And your teachers. And your bus driver.
Crazy, right? Adults are people with feelings who have bad days and sucky commutes and car problems and maybe even not-so-nice bosses. But despite all these things, they still get up in the morning and drive you to school and spend hours on lesson plans and make sure you're in the right place at the right time.

So ask mom how her day was. She will be floored. Do not do this every day or she might become suspicious. But every so often, disregard the fact that this is the woman who forces you to eat salad at dinner and asks you embarrassing questions about your "lady friends."

4. You will face disappointment.
Maybe you bomb a big test. Maybe the girl who you're crushing on with the freckles and red Converses starts dating that jerk in your algebra class. Maybe you get cut from the lacrosse team. There are going to be many, many of these times when you might even think, "This Is The Worst Thing In The World." You will make bargains with God and not just for the snow days.

Rest assured, what it is is not the worst thing in the world. Because far worse will happen to you. The good news? These terrible things are temporary. They are waves that will crash into you, leave you nice and drenched and possibly with hypothermia, but they'll eventually retreat. You'll survive and when the next wave hits you, you'll take it much better.

5. Get the SparkNotes -- but read the book.
I'll never forget the time where I was book-shamed at Barnes & Noble the summer going into sophomore year for buying the SparkNotes for Oedipus Rex. The cashier totally gave me the stink-eye and said (in the most judgmental way possible), "You're going to actually read the book, right?" I was mortified.

Yes, I did actually read the book -- but I had bought the SparkNotes first because I just assumed it would be a nightmare. No, Oedipus Rex wasn't a walk in the park for me and there's nothing wrong with getting a little help, but it wasn't as bad as I thought -- and I probably should have given it a chance first before determining it would be "too hard."

Challenge yourself. Maybe Oedipus Rex won't rock your world, but one day you will read that book that Changes Your Life Forever (shout-out to The Perks of Being a Wallflower) so don't cheat yourself. You might be surprised.

6. Save a little money.
You'll get your driver's license in a few years, which will require you to drive a car. You will have to put gas inside said car. As you get older, you will find that life becomes increasingly expensive. Right now, having $30 in your faux leather wallet is a luxury. You can buy 30 cheeseburgers off the Dollar Menu at McDonald's! You are rich! Life is great! Please understand that this is temporary, so enjoy it -- and maybe consider putting a little of it aside.

7. Don't let fear keep you from doing something.
It's scary putting yourself out there, but try and push yourself, anyway. Join a club. Don't see one you like? Start your own. Try out for a sports team. You might get rejected, but at least you gave it a shot. Ask that girl to homecoming. She could say no, but then she's making the biggest mistake of her life, okay? Apply to that dream school even though the SAT requirement is double your original score. Don't allow the "what ifs" in life to make you crazy.

8. Sleep.
As Mariah Carey once said post-breakdown (you were very young when this happened), "Sleep deprivation is real." Go to bed. That's all. Just do it.

9. Be a team player.
I hated group projects -- mostly because I am a control freak. The cold hard truth is that you will be doing group projects for the rest of your life. Learn to go with the flow, but don't be a pushover. Assert your ideas. Pull your weight. Don't be "that" person who lets the work fall on everyone else. And don't be the person who never gives a teammate a chance.

10. Grades matter, but they don't.
Here's the deal: Your grades matter because they will determine your GPA, which will be considered when you apply to colleges. But know that you are much, much more than some number. That doesn't mean slack off, but I wish I didn't obsess as much as I did because you will never remember that grade you got second semester of AP History, but you will remember freezing in the stands during your first football game, Spirit Week and staying up until 3 a.m. laughing at stupid YouTube videos with your friends. These moments are what matter.

11. You are cooler than you think.
Listen, you share your name with some of the best-tasting whiskey around so you are automatically a badass. (Just don't drink that whiskey -- yet. When you are older, we will drink it together while listening to records.) "Cool" isn't doing what your friends are doing. "Cool" is being confident in where you stand. Never apologize for liking what you like. In the immortal words of Taylor Swift, "Haters gonna hate, hate, hate." So you do you, dude.

12. Call me.
For real. Call me when you want someone to look over your college admissions essay. Call me when shit hits the fan. Call me when you're at a party and perhaps you've made some ~questionable~ decisions. I won't judge you. I'll only judge you if you do something weird like wear socks with sandals. Promise.

Love you more than Taco Bell Crunchwrap Supremes (which is a lot),
Taylor 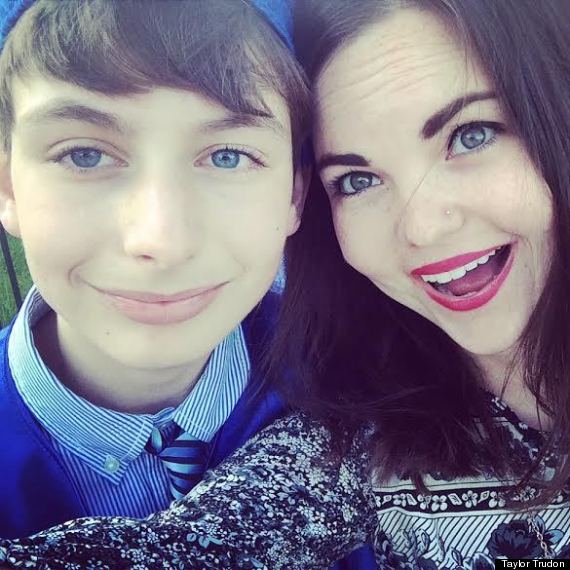 Eighth-grade graduation. But first, let me take a selfie.

Taylor Trudon
On Assignment For HuffPost

Teen Back To School