Even as schools in at least 30 states are still struggling with less funding than before the Great Recession, there's a good case to be made for this budget item: Kids are safer when ATs are around.

High schools with ATs reported more concussions in the American Academy of Pediatrics study, but that's a good sign. Concussions are often undiagnosed and untreated, which can lead to more serious injuries.

"Every high school team in the nation should have a certified athletic trainer who’s working with them," said Jonathan Drezner, a professor of family medicine at the University of Washington in Seattle and a team physician for the university's Huskies as well as the Seattle Seahawks.

NATA's latest data are part of a study to be published in the Journal of Athletic Training early next year. The association emailed surveys to all U.S. public high schools and followed up with phone calls to those that did not reply.

The argument for athletic trainers is not new. In 1998, the American Medical Association's Council on Scientific Affairs presented a report stating that "team physicians and coaches should have the assistance of a certified athletic trainer." The basis of this recommendation was that although high school-level injuries are normally minor, an AT's presence would "ensure that such injuries are recognized early, treated immediately, and allowed to heal properly, thereby reducing the risk of more serious injury or reinjury."

ATs are certified health professionals with at least a four-year degree that includes training in injury prevention, physiology, nutrition and first aid. More than 70 percent hold a master's degree, according to NATA.

Their use is on the rise -- in 2009, just 42 percent of high schools had any access to ATs. But many student-athletes are still not served.

Whether full-time, part-time or per diem, schools on the East coast tend to have more athletic training services, according to data collected from 2011 to 2013 in a collaboration between the Korey Stringer Institute and NATA. But only Hawaii has coverage in all schools. 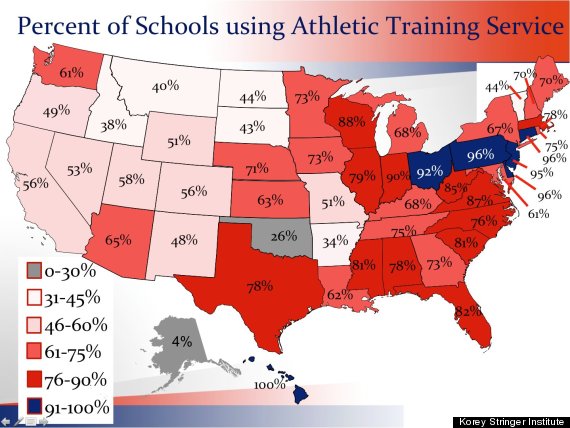 "Overall, school administrators gave the following reasons for not hiring an athletic trainer: no funding/budget, no perceived need, perception that coaches can instead fill the role, small school size, and rural location," said Riana Pryor, director of research at the Korey Stringer Institute.

Smaller rural schools especially have a hard time filling the position, but Cooper said athletic training services can be provided with some creativity. For instance, ATs can work at multiple schools, be subcontracted from a hospital or physicians' office, or serve multiple positions at a school. Cooper himself works as both a teacher and an athletic trainer.

"There are so many things an athletic trainer does," said Cooper. Among other responsibilities, they handle preseason conditioning programs and strength and flexibility training throughout the season, help students rehabilitate after injury, manage concussion care, ensure proper equipment fitting, help prevent heat-related illnesses and take care of small injuries before they become big problems.

Preseason screening by physicians, indicating that a student is fit to play, is important, but these screenings don't catch everything, including some potentially fatal pre-existing conditions.

This is where an AT's presence can be vital. In an emergency situation, like a cardiac arrest, "seconds make a huge difference," said Andy Smith, head athletic trainer and clinical instructor at Canisius College in Buffalo, New York. ATs are trained to recognize critical symptoms and are familiar with life-saving procedures.

The Korey Stringer Institute's data show that 24 percent of schools have no medical coverage at public secondary school sports games, while 30 percent bring in an MD or emergency medical technician for all games. 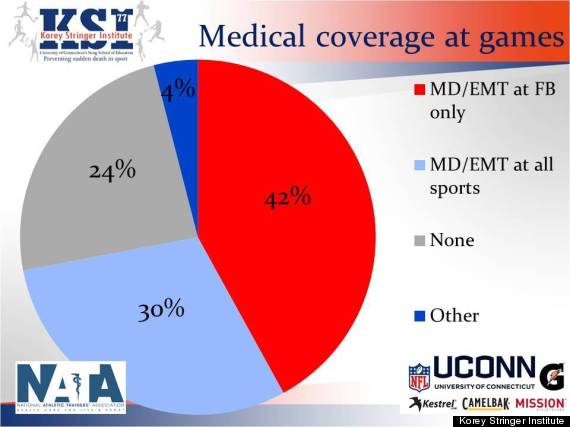 But an AT's real job is to prevent emergencies by monitoring players' health throughout the season and making sure preventative measures are taken.