This piece comes to us courtesy of New Haven Independent.

Solanlly Canas had to tackle some tough math problems at home—and she had herself to thank.

Canas (at right in photo), a senior at High School in the Community (HSC), assigned herself the homework, factoring polynomials, last week.

She brought her work into Riley Gibbs’ Room 208 at the Water Street magnet school, where a new experiment is taking place to reimagine high school education.

It was a new breed of math class—one where kids assign themselves their own homework, learn at their own pace, and take tests only when they’re ready.

Gibbs is one of the first teachers at HSC to take the plunge into “independent pacing”—which re-invents the idea of a normal “class” where a teacher guides all students at the same speed.

The new method, which all teachers are expected eventually to adopt under an HSC “turnaround” plan, is part of a quest to end the factory “assembly line” of high school education. Starting with the first-year students, the 250-student school is getting rid of social promotion and insisting kids master skills before moving up to the next level. Teachers are also free to re-invent curricula, now that the school has been tapped as a turnaround directly managed by the teachers union instead of the school district’s central office. It’s all part of the newest—and what may be the most experimental and far-reaching—plans to turn around failing schools under New Haven’s citywide reform drive.

When the Independent took a glimpse into Gibbs’ precalculus last Thursday, students were still getting used to the new way of doing things.

Students had mixed reactions, as they adapted differently to the challenge of self-assigned work.

Instead of leading class with a traditional lecture from the front of the room, Gibbs devoted most of the 80-minute period to letting kids work alone or in groups. Seventeen juniors and seniors showed up for the class Thursday, the 11th day of school.

A trio of seniors seized the chance to work together by a window for the entire class.

Their quest: to factor polynomials.

In the new model, students plug away at a given topic until they get it. Tests don’t come every Wednesday, as in Gibbs’ class last year. Now students take a test only when they demonstrate they’re ready.

Instead of numbers or letters, students’ work gets graded with four “levels”: Level I indicates a student isn’t yet able to do the work independently; Level IV indicates mastery.

Students have to score a Level III on a test before proceeding to the next topic. The method allows students to finish a topic in a day or a week, depending on how quickly they learn.

Gibbs said he does take some time to introduce new concepts from the front of the room, in a more traditional style. At other times, kids work in groups or independently, pacing themselves according to which “level” they feel they’re on. Gibbs offers problems in Level II, III and IV. At the beginning of class, students set a goal for what they need to work on. They assign themselves classwork and homework accordingly.

The three seniors paged through their textbook Thursday. They skipped past the Level II problems.

“We already got the hang of these,” said Carlton “CJ” Heath.

They settled on Level III, factoring trinomials like 3x^2-x-2.

They said they liked the new setup. 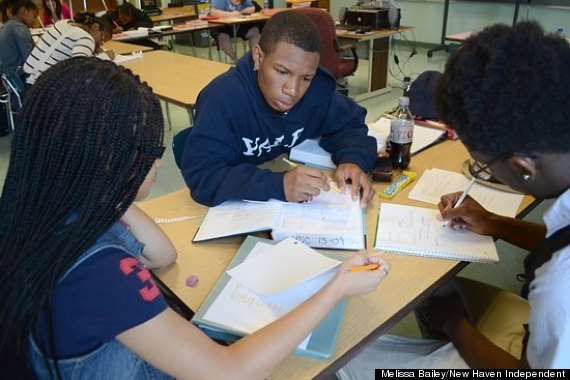 “This is the first year we’re allowed to work in groups,” said Trevor Smith (pictured above).

“If I’m behind on something, you don’t gotta rush and keep up,” said Trevor. “You understand it better so you can move on.”

Across the room, junior Kurt LoPresto chose to work by himself for most of the class. An aspiring zoologist or marine biologist, he isn’t ruling out a career in math. 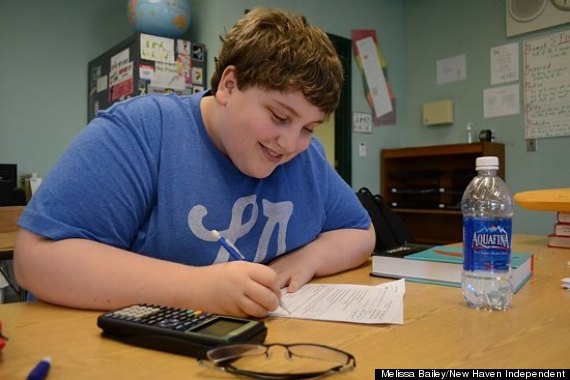 When Gibbs introduced factoring trinomials, Kurt (pictured above) took a look at the topic and decided not to wait for his peers.

“I’m very comfortable factoring,” he said. “I don’t want to slow down for the class.”

So Kurt sped ahead with the test. It turned out he had jumped the gun—he had to skip some problems on the test because he didn’t get them, earning him a Level II, which isn’t high enough to pass.

So on Thursday, he reviewed the test and studied the type of problems he wasn’t able to do.

Kurt said he prefers the new method over his past math classes, where he has spent a lot of time waiting around.

“I’m usually ahead, so I just sit in class doing nothing,” he said. “Now I can do something.”

Kurt didn’t give himself any homework Wednesday because he had zipped through his work in class.

“I have other classes, so I consider that before I give myself other homework,” Kurt explained. In another class, anatomy and physiology, which is also piloting independent pacing, he assigned himself extra homework because he likes it so much.

He was asked if he’d like to finish the precalculus curriculum ahead of time, and take a peek at some calculus before taking an Advanced Placement class next year.

At another cluster of desks, Gibbs’ new method got less rave reviews.

“I don’t really like this whole Level I, II thing,” grumbled senior Chastity Berrios. “Teachers don’t teach you. They expect you to grab the book and do it yourself. I don’t think it works.”

Chastity struggled with a warm-up problem that tested her knowledge of Algebra II from the year before.

“It’s a waste of my time to try it now, when I didn’t learn it last year,” she reasoned. She penciled in an answer and waited for help from Gibbs, who was roving between a half-dozen small groups of students.

Chastity Berrios said she did master Wednesday’s lesson on the “zero-product principle,” which Gibbs taught in a more traditional lecture style—a style she prefers. The go-at-your-own pace style, she said, is “totally something new.”

“I’m doing the work, and I know it’s for my benefit,” she said, but she feels too much on her own.

“I don’t like it,” agreed Leydi Jaramillo. Before learning a concept, “I need you to go over it.”

Solanlly Canas stepped in to explain the warm-up exercise to her two friends. Solanlly has been stepping in as “teacher” to her friends more these days because of the new classroom setup.

She said she still needs her own teacher, too.

Solanlly assigned herself a Level III problem set for homework, but found it difficult to complete.

“I tried to read the textbook. It was confusing,” she said. Her goal for Thursday was to proceed to Level III, “but I need him to teach me before I go there.” 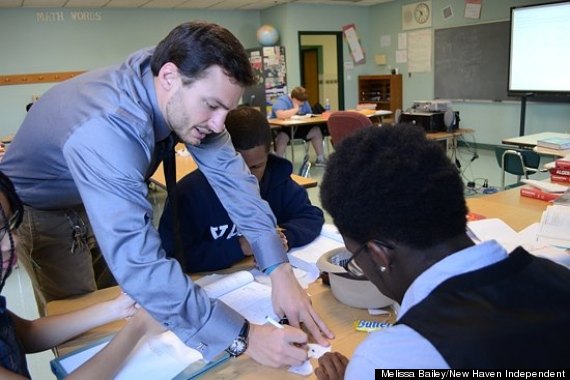 Gibbs said textbook literacy is a major hurdle to getting students on board with the new model. He has recruited the library media specialist to help train students on how to read a textbook, so they can be empowered to teach themselves more.

He said he has heard feedback from students like Chastity who would like more structure and direction.

“I’m still figuring it out for myself, how to maximize my ability to help people,” said Gibbs. But he said from her work, “I know she’s still getting the material.” 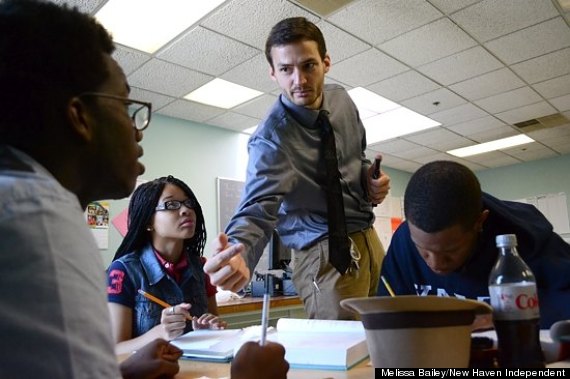 Gibbs (pictured), who’s 26, from southern California, arrived at HSC two years ago through Math For America, a New York-based teacher training program aimed to improve math instruction. Now in his fifth year of the program, he’s taking on leadership roles, helping rewrite math curricula for the school and the district. The curricular freedom at HSC comes because the school is no longer managed directly by the school district’s central office.

HSC, which has been teacher-run since its inception in 1970, has always been fertile ground for experimentation. In its latest rebirth, a state-sanctioned “turnaround” effort, the school aims to eventually get rid of the idea of the traditional “class” and let students learn at their own pace in each class, said Building Leader (aka principal) Erik Good.

Gibbs is one of a handful of teachers who chose to pilot the method this year.

He said some students have embraced the change “for the right reasons,” because they pace themselves, and dig deeper into a topic if they’re curious.

Others embraced it for the wrong reason.

“I’m not going to do any homework!” some students exclaimed, Gibbs said.

If students are pacing themselves so slowly that they aren’t on track to finish the course by the end of the year, he said, he would call home to let parents know. And if don’t make progress, they’ll have to stay after school for mandatory catch-up time, a new introduction to HSC this year.

If, by the end of the year, students haven’t finished the curriculum, they won’t have to redo the entire precalculus class. But they will have to finish the course next year before moving on to calculus, Gibbs said. Because seniors are caught in a transition between school models, they’ll get a grade based on the work they do this year, with no requirement to finish the entire curriculum before graduation.

Gibbs said this year’s method is a departure from last year’s, where there was a pressure for everyone to be on the same pace.

When everyone is forced to learn at the same speed, “a lot of kids get discouraged, get behind and give up,” he said. That was particularly true for the four out of ten HSC students who were chronically absent last year. “Kids fall so far behind that they check out,” and just wait until the next year to retake the course, he said.

The new method is better for chronically absent kids, Gibbs said—if they miss three days of school, “they can pick up where they left off” instead of feeling overwhelmed.

Gibbs said with a traditional lesson, he can end class knowing the entire class has learned the same concept. With the new method, it’s harder to tell how much kids learned in a given day.

But he got the sense Thursday that “most of them were spending their time well.”

“Everyone was pretty productive today,” he said.

As they packed up at the end of class, Carlton said he wished he’d had more help from the teacher.

“That’s OK,” Trevor assured him. “It just means he thinks we’re capable of doing it on our own.”

Past Independent stories on High School in the Community: