On Monday afternoon, protesters around the country took to the streets to peacefully protest a grand jury's decision not to indict Ferguson Police Officer Darren Wilson for the killing of 18-year-old Michael Brown. Among the demonstrators were a number of young students, who left class in the middle of the school day to show solidarity with the protesters in Ferguson, Missouri.

Monday's protests took place at 12:01 Central Time, the time the unarmed teen was killed on Aug. 9. According to the Ferguson National Response Network Tumblr, students from about 10 high schools confirmed that they would participate in the protest. Pictures on social media show that students from other schools also left class to protest.

Since it was announced last Monday that Wilson would not be indicted, people of all ages have demonstrated their opposition, arguing that the shooting and subsequent grand jury decision are representative of pervasive racism and inequality in the United States.

Below are pictures -- posted on social media accounts of schools, teachers and observers -- of students protesting around the country.

The kids are alright. A big group of students from Bard HS just showed up for #HandsUpWalkout in Union Square. pic.twitter.com/JdPME7naEf

About 50 students from St. Paul Johnson high school marching 3 miles to the capital in protest of Ferguson. pic.twitter.com/XtlN8Hw76N

Students come together during their second block to peacefully protest about recent events in Ferguson pic.twitter.com/ES7EcG4sRp

Students at Clayton High School in Missouri walked out of class, and also participated in a "die-in," where they laid in silence for over four minutes -- to represent the more than four hours that Michael Brown's dead body laid in the Ferguson streets. 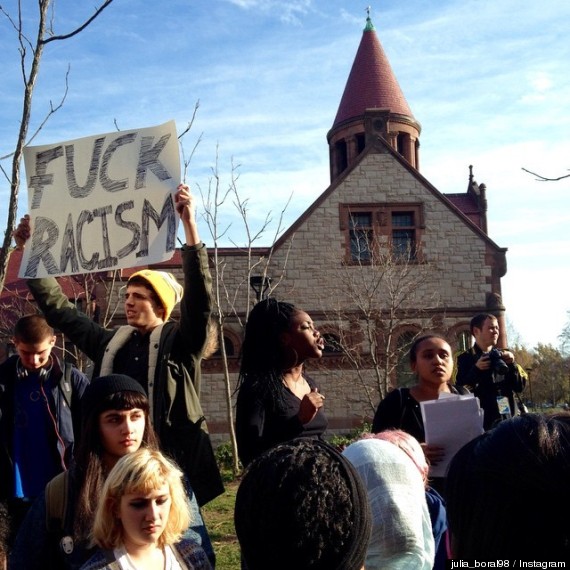 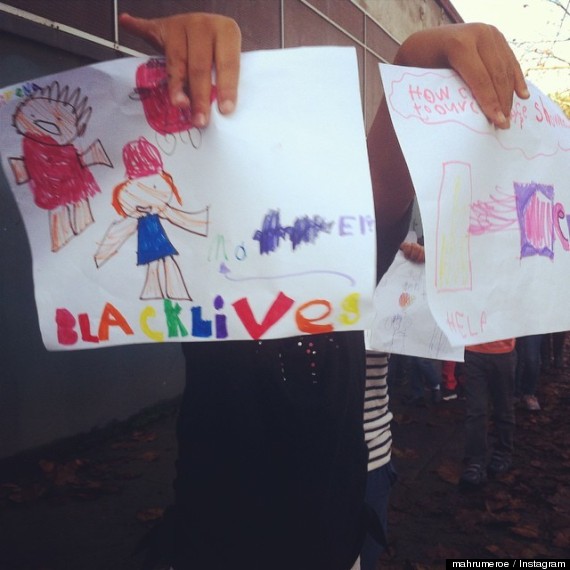 Photographic Evidence Revealed | 'First Year Law Student Could Have Done Better Job' | Ferguson Smolders After Night Of Fires | Protest Locations | Americans Deeply Divided | What You Can Do | Darren Wilson Interview | Darren Wilson Could Still Face Consequences | Timeline | Students Protest | Shooting Witness Admitted Racism In Journal | Peaceful Responses Show The U.S. At Its Best | Reactions To Ferguson Decision | Prosecutor Gives Bizarre Press Conference | Jury Witness: 'By The Time I Saw His Hands In The Air, He Got Shot' | Thousands Protest Nationwide | Ferguson Unrest Takes Over Newspaper Front Pages Across The Country | Grand Jury ‘Should Be Indicted,’ Brown Lawyer Says | Grand Jury Documents Reveal Mistakes, Questionable Testimony | Parents Bring Young Kids To Bear Witness To Ferguson Protests | 12 Sobering Numbers That Define The Fight To Get Justice For Michael Brown | Saints Player's Moving Reflection On Ferguson Goes Viral | Amid Ferguson Cleanup, Locals Look For Their Community To Rise Above The Damage | 'They're Murdering Our Kids And Getting Away With It' |